Should you still be wearing a mask outdoors? And how should you reorient your family’s life once the adults have been vaccinated but the children have not yet been?

Those are two Covid-19 questions on many people’s minds, and The Times has just published two stories that address them, based on interviews with experts. A common theme is that it’s OK to start making some changes to your behavior and loosening up in careful ways — or at least to begin thinking about it.

On the issue of outdoor mask wearing, it helps to review a basic fact: There are few if any documented cases of brief outdoor interactions leading to Covid transmission. If you’re passing other people on a sidewalk or sitting near them on a park bench, the exposure of exhaled particles appears to be too small to lead to infection.

“Viral particles quickly disperse in outdoor air, and the risk of inhaling aerosolized virus from a jogger or passers-by are negligible,” my colleague Tara Parker-Pope writes, citing an interview she did with Linsey Marr of Virginia Tech. As Dr. Muge Cevik, an infectious-disease expert at the University of St. Andrews, says, outdoors is “not where the infection and transmission occurs.”

Still, why not try to eliminate even a minuscule potential risk and tell people to wear a mask at all times? Because that’s not an effective way to reduce overall risk. “I think the guidelines should be based on science and practicality,” Marr said. “People only have so much bandwidth to think about precautions.”

There are still important precautions to take, ones that are much more based in science than universal mask wearing. Unvaccinated people should wear masks when in close conversation with people outside their family — even outdoors — and should almost always wear a mask when indoors and not at home. Vaccinated people should continue to wear a mask in many indoor situations, to help contribute to a culture of mask wearing. It’s the decent thing to do when more than half of Americans still are not vaccinated.

Tara’s story includes a delightful graphic that summarizes the advice.

The second question — about what activities unvaccinated children can resume — may be even thornier.

By early this summer, nearly every U.S. adult who wants to be vaccinated will have had the opportunity, but most children will not have gotten a shot. (For now, no children under 16 are eligible.) This combination will create complex decisions for many families — about whether to send children to day care, get together with friends and relatives, eat in restaurants or travel on airplanes, as I describe in an article for the Sunday Review section.

Some families will choose to remain extremely cautious. Others will decide to start resuming many activities. My central argument is that both decisions are grounded in science.

On the one hand, Covid is a new disease, with uncertain long-term effects, which argues for caution. On the other hand, the risks to children appear to be extremely low, which argues for a move toward normalcy. For most children, Covid presents no more risk than a normal flu season, the data suggests.

These charts compare the share of estimated Covid cases that have been fatal, by age group, with the estimated share of fatal flu cases. As you can see, Covid has exacted a brutal toll on adults, far worse than any flu season — but the picture for children is very different: 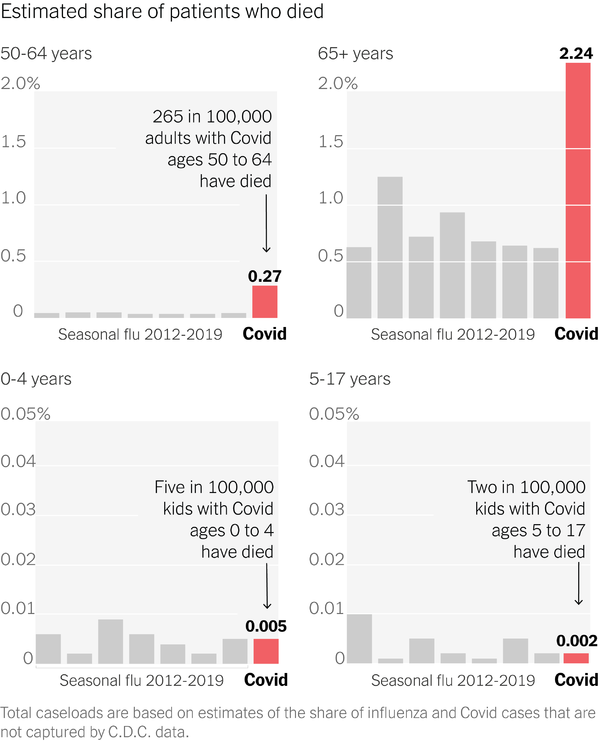 As with outdoor masks, extreme caution has its own downsides. Months of additional isolation would not be good for families, multiple studies have suggested. Isolation makes it harder for parents to return to work and harder for children to learn, develop social skills and be happy.

In the article, I quote two Covid experts who say that they will not keep their own children cooped up until they are vaccinated. “It’s really important to look at a child’s overall health rather than a Covid-only perspective,” Dr. Amesh Adalja, another expert, at Johns Hopkins University, said. If you let your children go to school during flu season, let them travel in a car or let them go swimming, you’re probably exposing them to more risk than Covid presents to them.

I understand why many people will continue to exercise more caution than the data suggests is necessary (and, to be clear, caution with children is vital until more adults have had the chance to get a vaccine). Covid has been horrible, arguably worse than any other infectious disease in living memory, and it is not over. “We’ve been so traumatized by all of this,” Gregg Gonsalves, a Yale epidemiologist, told Tara Parker-Pope. “I think we need to have a little bit of compassion for the people having trouble letting go.”

Compassion is a good concept. At this stage in the pandemic, different people are going to start making different decisions, and many of those decisions will be defensible. Before lashing out at behavior that is different from your own, maybe it’s worth pausing to ask whether compassion is the better response.

The full article has more details and charts about the trade-offs for children.

President Biden urged companies to give employees paid time off to get vaccinated.

New infections around the world hit a record last week, with much of the increase in India.

The Pfizer and Moderna vaccines pose no serious risks during pregnancy, an early study suggests.

Biden will commit the U.S. to halving climate-warming emissions by 2030. Here’s how the goal stacks up globally.

John Kerry, Biden’s global climate envoy, said that the Trump administration had “lied to the American people” about global warming.

The Justice Department announced an inquiry into the Minneapolis Police Department. Such investigations largely stopped during the Trump administration.

Biden plans to declare that the Ottoman killings of Armenian civilians during World War I were genocide. It could fray relations with Turkey, which rejects the designation.

The Missouri Legislature expelled a member after an investigation concluded that he had abused his children.

In his annual address, President Vladimir Putin warned foreign powers not to interfere with Russia.

The Manhattan district attorney will stop prosecuting prostitution, shifting the focus to pimps, traffickers and clients.

A video and 911 calls shed light on the fatal police shooting this week of Ma’Khia Bryant, 16, in Columbus, Ohio.

In response to sexual abuse allegations against the author of a new Philip Roth biography, the publisher said it would pause shipping.

Phone scammers swindled a 90-year-old woman in Hong Kong out of almost $33 million.

A crush, a void or a scream? Astronomers are trying to decide what to call a collection of black holes. Tell us your ideas.

Lives Lived: The celebrated stripper Tempest Storm was among the last of the great 20th-century burlesque stars. She was famous the world over, and she continued performing into her 80s. She died at 93.

Historians of the United States often view the middle decades of the 20th century negatively, for some good reasons, including McCarthyism, segregation, sexism and anti-democratic foreign policy. One of the strengths of Louis Menand’s new cultural history of this period, “The Free World,” is that it manages to confront its many injustices while resurrecting its highlights, as David Oshinsky, a New York University historian, writes in his Times review.

“There too often is a blind spot in which the positives of this era — soaring college enrollments, record book sales, judicial blows against racial injustice, a declining wealth gap — are viewed as tangential to the narrative, or worse, as cover for the nation’s many ills,” Oshinsky writes. The book “sparkles,” he says, because it explains how American culture ascended during the 1950s and 1960s.

This year’s specials include a Greta Thunberg documentary, a David Attenborough extravaganza and Cher rescuing an elephant.

This is not your average stained glass.

The hosts talked about policing.

The pangram from yesterday’s Spelling Bee was amicably. Here is today’s puzzle — or you can play online.

Today’s episode of “The Daily” is about “red flag” laws. On “Sway,” the evolution of “Desus & Mero.” And listen to Chapter 4 of “The Improvement Association.”