Can U.S. state governments withhold public contracts or financial investments from companies that boycott Israel? Twenty-six states have laws and regulations to this effect (legislation is pending in 13 more), but the American Civil Liberties Union has recently brought suits on behalf of plaintiffs in four states who object to this condition, claiming it infringes on their freedom of speech as protected by the First Amendment to the U.S. Constitution. 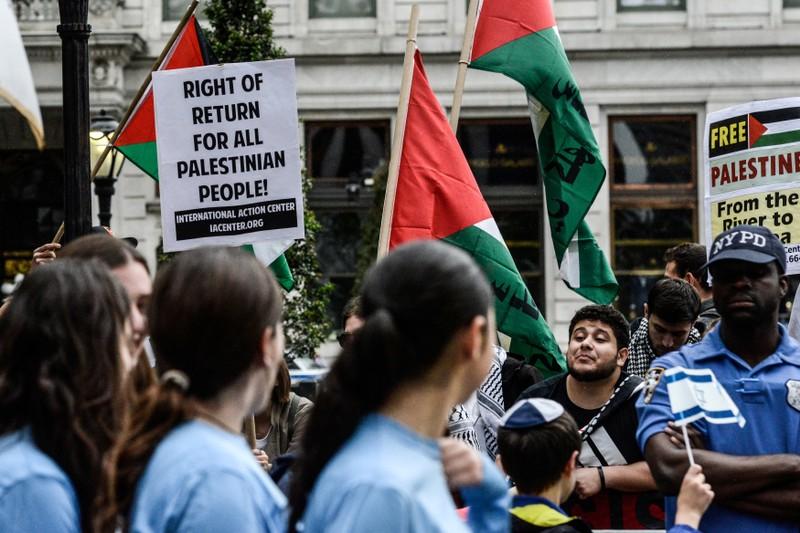 So far, a speech pathologist is suing the state of Texas because her annual contract with the school district now requires she certify that her business is not boycotting Israel. An Arkansas newspaper is suing after a local community college conditioned continuation of its advertising contract on a similar requirement. In Arizona, the state is appealing a district court decision that ruled its statute unconstitutional. And in Kansas, a suit was dismissed after the law was amended to set financial limits, exempt sole proprietorships, and limit its scope to boycotts affecting an integral part of business sought with the state.

Meanwhile, the issue has sparked controversy in the Senate as lawmakers may soon vote on a clause affirming states’ rights to direct their contracts and assets in this way. The measure, included in the Senate’s first bill of the new Congress, is aimed primarily at the Boycott, Divestment, and Sanctions (BDS) movement against Israel.

Activists on one side of this debate have maligned anti-boycott laws as requiring a “loyalty oath to Israel,” arguing that “the government cannot force people to subscribe to a specific political viewpoint.” When so framed, these laws appear to be intolerable censorship. The First Amendment enables anyone to freely express their views without fear of government retribution – even if those views are racist or anti-Semitic. But ACTING on such views is in many cases illegal, particularly when the effect is discriminatory. So while First Amendment arguments must be evaluated in these lawsuits, ignoring the well-established distinction between speech and action grossly misrepresents the controversy.

Contrary to the challengers’ free speech narrative, these state laws do not actually impact anyone’s ability to hold, express or advocate any viewpoint. Instead, they only require businesses seeking government contracts (or investments) to certify they are not engaged in discriminatory boycotts. This is actually milder than many other antidiscrimination laws at the federal, state and local level, which require companies – regardless of their financial relationship with any government – to disregard traits such as religion or national origin in hiring practices and business dealings. The laws in question here, instead of directly regulating conduct, are intended to spare the public from subsidizing companies that act contrary to the collective interest.

The key question that free speech advocates (and the courts) have to answer is whether a boycott of Israel, in its current form, is merely a political viewpoint rather than a form of discrimination. For if such a boycott does nothing but express a political viewpoint, these laws should be struck down. The collective interest is never served by stifling one side of a genuine debate. However, if a boycott represents discrimination against a protected category, it would be on par with any other uncontroversial law safeguarding public funds from being used toward discriminatory ends.

While much discourse on this subject has uncritically assumed Israel boycotts are the former, there are good reasons to believe they’re the latter.

Most Israel boycotts today are conducted in solidarity with the BDS movement, founded in 2005. As just the latest in a long line of Jewish boycotts, BDS is arguably discriminatory in both its goals and its effect. Ignoring countries engaged in far more egregious behavior, the movement singles out Israel as exceptionally and uniquely evil among all nations of the world. It spuriously places all blame for a two-sided conflict on “Jewish colonialism.” And though there may certainly be times when Israeli policies or government actions warrant criticism, BDS does not merely target any individual Israeli policy or government. Rather, it rejects Jewish self-determination outright. Co-founder Omar Barghouti has said he opposes a Jewish state “in any part of Palestine,” which BDS sees as being a single state between the Jordan River and the Mediterranean Sea.

The practical impact of BDS on Jews and Israelis in the United States is no less troubling. When companies and organizations engage in secondary boycotts of Israel, meaning they won’t do business with entities that have a relationship with Israel, this disproportionately targets both Jewish and Israeli Americans. And harm to Americans is not only economic. A team of professors at Brandeis University conducted an extensive study across 50 campuses and found Jewish students reported increased harassment, intimidation and hostility toward them on campuses with rising BDS activity. Student BDS leaders in particular have posted vile and hateful messages like “Every time I read about Hitler I fall in love all over again” and “Let’s stuff some Jews in the oven.” And ironically for a group now waving the First Amendment flag, BDS advocates regularly heckle and even shut down events organized by Jewish groups to discuss Israel.

To be sure, the U.S. Constitution protects the right of any individual to criticize Israel or engage in hate speech. And following the Kansas model, the appropriate scope of Israel boycott laws may be clarified in the months and years ahead. But to oversimplify this issue as one of censorship erases the distinction between speech and action, denies the relationship between BDS and anti-Semitism, and ignores the broad latitude state governments in the United States have to prevent discrimination.