Secretary of State Mike Pompeo’s much-marketed speech in Cairo was rich in straw man fallacies while short on substantive specifics, a speech bursting with contradictions that reminded me just how hard it must be to speak for a president who has, at best, an incoherent foreign policy. Pompeo’s speech appeared to have three intended audiences, none of which was actually present in the American University in Cairo auditorium: the Oval Office; the Saudi royal court; and President Trump’s political base, which hungers for ABO (“Anything but Obama”), however inaccurate. 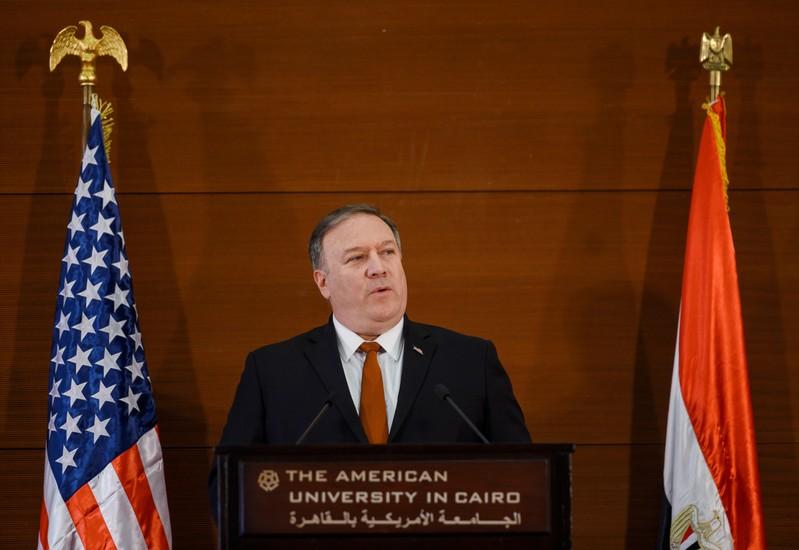 The strange revisionism of Pompeo’s Cairo speech was hard to miss. He began by excoriating Barack Obama for words the former president never spoke. Referring to Obama’s 2009 Cairo speech, Pompeo said that Obama had told Egypt that “radical Islamist terrorism does not stem from an ideology” and that “9/11 led my country to abandon its ideals.” Pompeo argued that Obama was guilty of seeing the United States “as a force for what ails the Middle East,” and that “the results of these misjudgments have been dire.”

Of course, Obama never said any of that. As his presidency began, in a Middle East still roiled by the American invasion of Iraq – a blunder opposed by most of the Arab world – Obama defended the United States: “America is not the crude stereotype of a self-interested empire. The United States has been one of the greatest sources of progress that the world has ever known.” He did make it clear that “I have unequivocally prohibited the use of torture by the United States,” and for good reason: President George W. Bush’s own administration had come to believe that Guantanamo and the fallout of the Abu Ghraib torture scandal had badly damaged America’s image, aided terrorist recruitment, and made it harder for the United States to bring Arab allies to its side. Obama never said that radical terrorism was devoid of ideology; in fact, like his predecessor, he argued that “America is not – and never will be – at war with Islam.” He separated the terrorists from the religion, in order to pull the Muslim world closer in isolating and fighting those very extremists who were bastardizing a religion.

It’s not a new phenomenon for the Trump administration to rewrite the history of the Obama administration. But this time it was particularly brazen. Pompeo argued that, after Syria’s 2013 poison gas attacks, “in our hesitation to wield power, we did nothing”; he neglected to mention that it was Republican Senate Leader Mitch McConnell who opposed granting Obama the authority he’d asked for to conduct airstrikes, or that then-private citizen Trump opposed U.S. intervention of any kind in Syria.

But the big question is why an American secretary of state would travel to the heart of the Arab world to deliver a speech largely intended for partisan political consumption at home?

One might argue that Pompeo had little choice but to engage in rhetorical broadsides, given the difficulty of explaining Trump’s vision. The secretary argued that “the age of self-inflicted American shame is over”; he might want to check with his commander in chief, who has famously defended autocrats who kill journalists and innocents and said, “our country does plenty of killing too.” It requires extraordinary rhetorical dexterity to attack his predecessors for “abandoning” the Middle East less than a month after Trump, without warning, announced a unilateral, precipitous withdrawal of U.S. special forces from Syria, prompting the resignation of Defense Secretary Jim Mattis in protest.

But my lasting worry about Pompeo’s speech is more than its contradictions; it’s the willful misunderstanding of what Obama sought to achieve in the region. Pompeo doesn’t need to agree with Obama’s policies to understand and be informed by their motivation.

Obama in 2009 sought a “reset” with the populations of the Middle East because he diagnosed the danger of America’s image being defined in the region to serve our adversaries’ agendas; the Arab Spring which followed two years later confirmed why the United States needs to tend to its image on Arab streets, not just with autocratic allies: there’s no guarantee their reigns will endure.

Pompeo should worry now that Trump, in mismanaging America’s image, has once again handed Iran and others a convenient weapon of mass distraction. He should certainly worry that Trump’s decision to put all his eggs in the basket of personal relationships with two or three leaders in the volatile region could prove short-sighted.

Pompeo should also remember that the Obama administration performed a delicate diplomatic dance: rather than plunge into a unilateral war with Iran, Obama won even grudging Gulf Arab support for an Iran nuclear weapons agreement that is still working in spite of the absence of the United States. By seemingly taking sides on ancient Sunni-Shia sectarian divisions between Riyadh and Tehran, Trump is exacerbating tensions instead of seeking an uneasy equilibrium that serves America’s interests.

And, of course, in decrying the Obama approach that successfully decimated Islamic State (which hasn’t changed in practice under Trump but has shifted in rhetoric) Pompeo forgets that Secretary of State John Kerry began his diplomacy to organize the coalition against Islamic State in Jeddah. Having the kingdom – home of Mecca and Medina – prominent in a coalition against Sunni extremists was pivotal in mounting an operation that couldn’t be mistaken as a war against Islam. It was Saudi Arabia that appreciated the ways the Obama administration bent over backwards to demonstrate that we were not at war with their religion.

Pompeo, like all secretaries of state, will ultimately be judged on substance, not speeches. But make no mistake, Thursday in Cairo, he made his own job a little harder. Some listening is in order – to the Arab Street, and to history.