Good morning. We look at the debate over coronavirus absolutism. 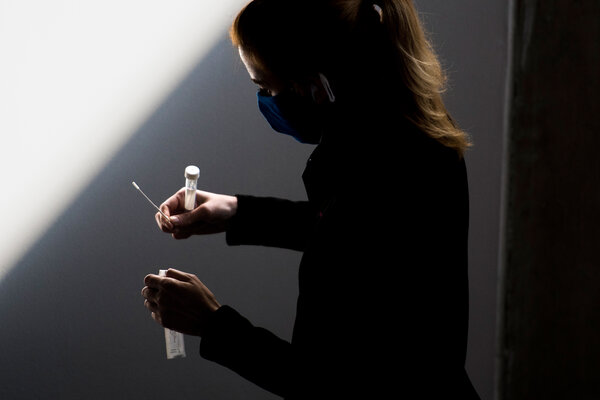 In a public health emergency, absolutism is a very tempting response: People should cease all behavior that creates additional risk.

That instinct led to calls for gay men to stop having sex during the AIDS crisis. It has also spurred campaigns for teen abstinence, to reduce sexually transmitted diseases and pregnancies. And to fight obesity, people have been drawn to fads like the elimination of trans fats or carbohydrates.

These days, there is a new absolutist health fad: the discouragement — or even prohibition — of any behavior that seems to increase the risk of coronavirus infection, even minutely.

People continue to scream at joggers, walkers and cyclists who are not wearing masks. The University of California, Berkeley, this week banned outdoor exercise, masked or not, saying, “The risk is real.” The University of Massachusetts Amherst has banned outdoor walks. It encouraged students to get exercise by “accessing food and participating in twice-weekly Covid testing.”

A related trend is “hygiene theater,” as Derek Thompson of The Atlantic described it: The New York City subway system closes every night, for example, so that workers can perform a deep cleaning.

There are two big questions to ask about these actions: How much are they doing to reduce the spread of the virus? And do they have any downside?

The answer to the first question, according to many experts, is: They seem to do little good. Prohibiting outdoor activity is unlikely to reduce the spread of the virus, nor is urging people always to wear a mask outdoors.

Worldwide, scientists have not documented any instances of outdoor transmission unless people were in close conversation, Dr. Muge Cevik, an infectious-disease specialist at the University of St. Andrews in Scotland, told me. “The small number of cases where outdoor transmission might have occurred,” she wrote on Twitter, “were associated with close interactions, particularly extended duration, or settings where people mixed indoors alongside an outdoor setting.” The new variants of the virus are more contagious, but there is no evidence to suggest they will change this pattern.

As my colleague Tara Parker-Pope puts it, “Avoid breathing the air that other people exhale.”

A student walking across campus — let alone a masked student — presents little risk to another student who remains at least six feet away. The same goes for joggers in your neighborhood.

The story is similar for deep cleaning. “Scientists increasingly say that there is little to no evidence that contaminated surfaces can spread the virus,” my colleagues Mike Ives and Apoorva Mandavilli have written. The one surface that is important to wash, frequently and vigorously, is the human hand.

Which brings us to the second question — whether there is any downside to absolutism. Covid-19 is a horrible disease. And the notion that a jogger somewhere might infect somebody she passes, even from more than six feet away, is scientifically plausible.

So why not take every possible precaution at all times?

The short answer is: because we are human.

Taking every possible precaution is unrealistic, just as telling all gay men and teenagers to abstain from sex was unrealistic. Human beings are social creatures who crave connection and pleasure and who cannot minimize danger at all times.

Despite the risks, we eat carbs, drink wine, go sledding and even ride in automobiles. We enjoy taking outdoor walks and drinking a cup of coffee on a public bench. Many people who exercise find it difficult to do so in a mask. “It feels a bit like suffocating,” Shannon Palus wrote in Slate.

I’ve noticed that some of the clearest voices against Covid absolutism are researchers who have spent much of their careers studying HIV, including Cevik, Julia Marcus, Sarit Golub and Aaron Richterman. They know the history. The demonization of sex during the AIDS crisis contributed to more unsafe sex. If all sex is bad, why focus on safe sex?

There is a similar dynamic with Covid. “People do not have unlimited energy, so we should ask them to be vigilant where it matters most,” Cevik has written.

Banning college students from outdoor walks won’t make them stay inside their dorm rooms for weeks on end. But it probably will increase the chances that they surreptitiously gather indoors.

And spending money on deep cleaning leaves less money for safety measures that will protect people, like faster vaccination.

“Rules that are really more about showing that you’re doing something versus doing something that’s actually effective” are counterproductive, Marcus told my colleague Ian Prasad Philbrick. “Trust is the currency of public health.”

House impeachment managers wrapped up their case with clips of rioters saying they were acting on Donald Trump’s orders. One rioter yelled at police officers, “We are listening to Trump — your boss.”

Failing to convict Trump, and to bar him from future office, leaves open the possibility that he could incite more violence in the future, the House managers argued. (Here are more takeaways.)

Few Republicans seem poised to vote for conviction. So House managers are addressing two audiences beyond the chamber: the American people and historians.

New details emerged about the involvement of the Oath Keepers, a militia group, in the Capitol attack. Prosecutors said that members had discussed a plan to bring “heavy weapons” into Washington.

Today, Trump’s lawyers will mount their defense. Here’s what to watch for.

The Biden administration said it had made a deal to acquire enough vaccine doses to inoculate nearly all Americans. But President Biden warned of “gigantic” logistical challenges.

Trump was sicker with Covid-19 than previously known, people familiar with his condition told The Times.

Vaccines are the new diplomacy: China, India, the United Arab Emirates and others are sending shots to countries where they seek sway.

The Australian Open in Melbourne will continue without spectators after a virus outbreak at a quarantine hotel.

Royal Dutch Shell predicted that its oil production had peaked and would never again reach its 2019 level.

The president of Tokyo’s Olympic committee resigned about a week after making sexist comments.

The police arrested Bruce Springsteen in November on suspicion of drunken driving. But was he drunk?

Modern Love: During lockdown, a long marriage shakes and then resettles.

From Opinion: Stacey Abrams and Lauren Groh-Wargo on turning Georgia into a blue state.

Lives Lived: Chick Corea, an architect of the jazz-rock fusion boom in the 1970s, spent more than a half-century as a top jazz pianist. But he never abandoned his first love, the acoustic piano. Corea died at 79.

We read a lot of other newsletters here at The Morning, and we will occasionally tell you about some of our favorites. Today, Sanam Yar has a recommendation:

There are few moments where I actually experience joy upon opening my inbox. Getting the “Unsnackable” newsletter is one of them. Each week, Folu Akinkuotu rounds up an assortment of international snacks and drinks that you probably won’t be able to buy. She also occasionally includes photos of her jaw-dropping baking projects.

Her brief descriptions of the snacks are delightful: coconut-pandan popsicles “would earn the respect of your Tide pen for being a worthwhile mess.” Back when travel was safe, visiting grocery stores was one of my favorite forms of tourism — a quick way to observe local culture. Reading “Unsnackable” briefly transports me to the aisles of an overseas supermarket, instead of the apartment where I have spent much of the past year.

There are savory potato wafers from Estonia, cashew fruit soda from Brazil, salted egg yolk sauce from Thailand and sweet corn-flavored ice cream from Singapore. Did you know that there are caviar-flavored Lays chips in Russia? Or that candy bars filled with cola marmalade exist — also in Russia?

The translated descriptions of some of the snacks are also quite lovely: A cream puff studded with chestnuts, when translated from Japanese to English, is “a surprise that overturns the common sense of cream puffs.” If that sounds appealing, you can subscribe (for free) via Substack.

The Lunar New Year is today. Celebrate with some longevity noodles. (And here’s a list for easy Valentine’s Day recipes.)

Museums in Los Angeles have been closed for almost a year. The Petersen Automotive Museum is hosting virtual garage tours.

What percentage of Americans have received at least one vaccine shot? Take this week’s News Quiz, and compete with other Times readers.

The pangrams from yesterday’s Spelling Bee were coffined, confide, confided, confidence and confined. Here is today’s puzzle — or you can play online.

Thanks for spending part of your morning with The Times. See you Monday. — David

P.S. Axios reports that The Times is developing a digital subscription for families, called NYT Kids, that will feature crafts, recipes and games.

Today’s episode of “The Daily” is about French secularism. On “The Ezra Klein Show,” a former Senate staffer discusses the filibuster.