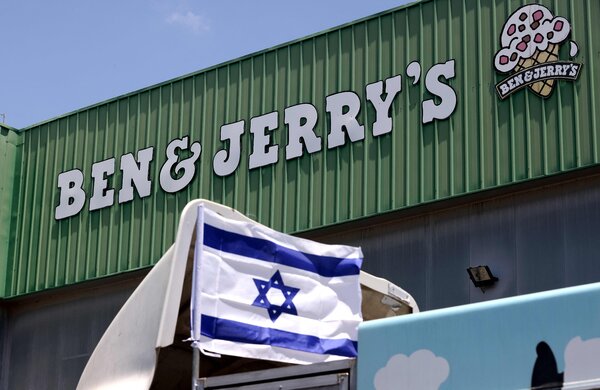 Ben & Jerry’s decision to terminate a franchisee located in the Israeli-occupied territories, employing both Arabs and Jews, is a profoundly wrong move.

The corporate decision the writers defend applies economic and moral coercion to one side of a complex conflict, with competing equities and narratives. It wholly ignores, for example, several peace plans put on the table by Israel, endorsed by the United States and rejected by the Palestinian leadership.

Tagging one side with all responsibility for the Israeli-Palestinian conflict may make self-described social justice advocates proud, but it advances neither peace nor justice.

To rebut the charge of anti-Semitism, Ben and Jerry draw a distinction between not doing business in Israel, which they agree would be wrong, and refraining from business in the West Bank.

The chair of the company’s board of directors has publicly said it wanted to boycott Israel but was overruled (wrongly she believed) by its parent company, Unilever, and now may do so only under unspecified arrangements.

The failure of Ben and Jerry to address that reality fatally undercuts their argument.

Prime Minister Naftali Bennett of Israel has dubbed “anti-Semitic” and “anti-Israel” Ben & Jerry’s decision to end sales of its ice cream in Jewish settlements in the Israeli-occupied West Bank while continuing to distribute within Israel’s internationally recognized borders.

George Orwell famously opined that “in our time, political speech and writing are largely the defense of the indefensible.” Israel’s leaders today defend a policy of subjugation and oppression of Palestinians, of denial of democratic rights to self-determination and equality by wholesale delegitimization of critics and those who refuse to be complicit in their offenses to justice and human rights.

Bennett Cohen and Jerry Greenfield, the Jewish founders of Ben & Jerry’s, are right to view these concepts as “core tenets of Judaism.”

When Israeli leaders become apologists for injustice, when they gaslight those who stand for Judaism’s most sublime values, they privilege the tribal over the moral, emptying the very idea of Jewishness of its ethical core.

Gidon D. Remba
Westfield, N.J.
The writer, executive director of the Jewish Alliance for Change, served as senior foreign press editor and translator in the Israel Prime Minister’s Office during the Egyptian-Israeli peace negotiations from 1977 to 1978.

This issue has been around for a long time and is quite complex. Nonetheless, by stopping sales in the occupied territories, Ben & Jerry’s is depriving those residents of their ice cream. And sending no message to the Israelis.

If it wants to make its point to Israelis, it could continue to sell in the occupied territories but stop selling in Israel. Without their ice cream, some Israelis might just give the issue another look and tell their legislators.

I am Jewish and I totally agree with Bennett Cohen and Jerry Greenfield.

The belief that Jews should not criticize Israeli policies is reminiscent of Americans chanting “My country, right or wrong!” during the Vietnam War.

Patriotism does not require blind allegiance; it requires courage to challenge a government to live up to its ideals. Jews who support Israel need to hold Israel accountable to its principles.

Re “Even in Normal Times, Hosting the Olympics Doesn’t Pay Off” (DealBook, July 26):

The current method the International Olympic Committee uses to select nations and cities to bid on the Olympic Games is not working. The Games taking place in Tokyo are a good example. Preparing for these Games has cost Japan billions of dollars; smaller nations could not begin to afford to sponsor these Olympic events.

A more realistic approach for staging the Olympic Games would be to establish a permanent world-class Olympic facility in Greece, the birthplace of the Olympics. This permanent facility would be used for the opening and closing ceremonies, plus hosting the traditional sports, such as track and field. The other sports, such as swimming, gymnastics and basketball, would be held at separate facilities in various cities around the world.

The I.O.C. would still have control over the Olympic Games. However, by dividing up the responsibilities for logistics and financing, the Games would be much more manageable. This method would make it possible for smaller nations to sponsor some Olympic events.

A Substitute for Shopping

A good substitute for what Erin Aubry Kaplan describes (recreational shopping, wandering around stores, looking for items that surprise or delight) is going to a museum or a botanical garden.

You never know what might catch your attention, and if you are a regular visitor, you will develop favorites and find delight in things that have changed. And no fear of bringing home things you don’t need!