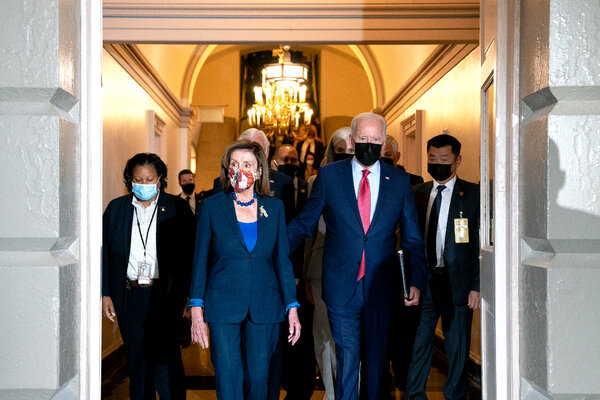 After reading this article, one might be forgiven for concluding that a small number of leftists have taken President Biden hostage and are imperiling his presidency.

The facts suggest otherwise. Almost two-thirds of Americans, 61 percent of independents and 39 percent of Republicans supported Mr. Biden’s Build Back Better plan in a recent poll. Within the Democratic Party, as the article concedes, the progressive wing far outnumbers the so-called moderates.

It therefore seems to me that the so-called moderates are in the minority on this one and that enacting Build Back Better would be both the popular and the democratic thing to do.

I’m a moderate Republican who voted for Joe Biden for two reasons: my disdain for the Trump presidency and Mr. Biden’s promise to govern as a moderate. Mr. Biden has clearly broken that promise by kowtowing to the progressive wing of his party, and now I feel like a chump.

Mr. Biden would be squandering his chance to unite the country (at least a little bit) if he allows the progressive representatives to cast aside the bipartisan infrastructure deal until the bloated $3.5 trillion social policy bill is passed.

This all-or-nothing approach shows that the pendulum of governance has swung forcefully to the left, guaranteeing an equally extreme reaction by the right in the next midterm election. What happened to governing in the middle?

Our leaders must recognize that unity happens only in the middle, not at the extreme left or right. Thank you, Senators Joe Manchin and Kyrsten Sinema, for being the voices of reason.