Many white people have become aware in the last year of the discrimination that Black Americans face in policing, voting, health care and more. Few, however, may recognize that systemic racism led to another grave injustice, one that underpins many other forms of exploitation: More than a century of land theft and the exclusion of Black people from government agricultural programs have denied many descendants of enslaved people livelihoods as independent, landowning farmers.

African-American labor built much of this country’s agriculture, a prime source of the nation’s early wealth. In the years since the end of slavery, Black Americans have been largely left out of federal land giveaways, loans and farm improvement programs. They have been driven off their farms through a combination of terror and mistreatment by the federal government, resulting in debt, foreclosures and impoverishment. 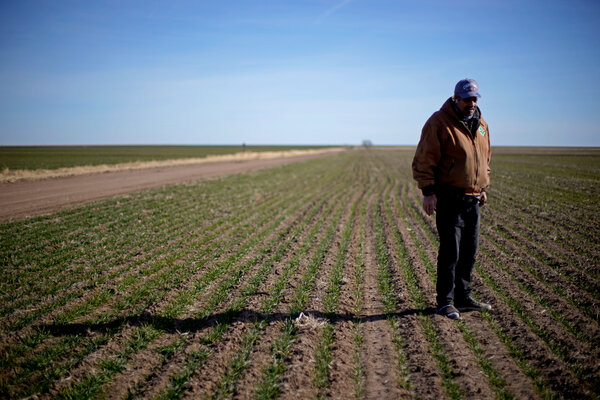 So a program that would pay off United States Department of Agriculture-guaranteed and direct farm loans and associated tax liabilities of Black, Indigenous, Hispanic and other farmers of color would not only be surprising, it would be historic. And yet it looks as though that may happen: Such a measure is included in the pandemic relief package wending its way through Congress.

The story of Black farmers is tragic. The Homestead Act of 1862 initiated the biggest land giveaway in U.S. history, and the beneficiaries were almost exclusively white men. Paired with slavery, the act formed a foundation for wealth-building that overwhelmingly benefited white farmers — and still does.

In the last 100 years, the number of Black-run farms has plummeted by a calamitous 96 percent, from close to a million (one in seven) of all American farms to around 35,000 (or about one in 50). The beneficiaries of that Black land loss? White farmers. By 1999, 98 percent of all agricultural land was owned by white people.

This trend has been spurred by exclusion from the federal programs that help make farming profitable and by well-documented racism at the U.S.D.A. The department’s discrimination has reached down to local loan officers, who often determine access to credit and therefore survival. Black farmers understandably have called the U.S.D.A “the last plantation.”

The ostracism has been so extreme that often Black farmers have been unaware that beneficial programs exist. And even when they have learned about government programs, they may have felt that applying isn’t worth the racist treatment they endure in the process. As John Boyd Jr., president of the National Black Farmers Association, said, “The average age of the Black farmer is 61, and he’s like, ‘I ain’t going back in there after the way they’ve treated me.’”

The actual scope of the discrimination may be unknown. So many injustices have been hidden that few in the field trust the U.S.D.A.’s version of the story. We do know, according to the most recent agriculture census, that Black farmers receive about $59 million in government payments; white farmers receive about $9 billion. Per capita, that’s $1,208 for Black farmers and $2,707 for white farmers.

As early as the 1940s, U.S.D.A. economists documented “deplorable economic conditions facing African-Americans in the rural South,” but Southern congressmen (including the namesake of a U.S.D.A. building, Jamie Whitten) blocked efforts to help Black farmers. By 1965, the U.S. Commission on Civil Rights found that the U.S.D.A. discriminated against Black farmers. In 1999 and 2010, the government announced settlement agreements for billions of dollars in cash and debt relief and tax payments to Black farmers.

Yet the payments fell far short, the department continued to discriminate, and the erosion in the number of Black farms — and the near impossibility for Black, Indigenous people and other people of color to get into farming — endured.

This historical pattern explains the collective moan when Tom Vilsack — a disappointment to Black (and many other) farmers and their supporters during his tenure as secretary of agriculture in the Obama administration — was nominated for the cabinet post again. But he seems to be responding positively to the shifting political climate and the general tone of the Biden administration, as the imperative for redressing insults and injuries to Black farmers is driving developments quickly.

It started in the run-up to the election, when an informal working group of leaders of the Black farming community helped presidential candidates develop policy.

After the election, Senator Cory Booker of New Jersey introduced the wide-ranging Justice for Black Farmers Act. The bill, which was reintroduced in February, would have paid off the U.S.D.A. debt of some Black farmers, and extends to Black farmers more of the benefits of the Homestead and Land-Grant College Acts of 1862. Those acts distributed land and funded public colleges focusing on agriculture, but by default they were programs for whites only, who were understood to be the “farmers” of the time.

Now a confluence of events — the newly Democratic Senate, perhaps even a newly responsive Mr. Vilsack, whose detractors wasted little time scorching his feet — is bringing about the much-needed change.

On Jan. 27, the U.S.D.A. announced an immediate moratorium on debt collection and foreclosure for the more than 12,000 farmers who are behind in payments to two programs administered by the U.S.D.A.’s Farm Service Agency — roughly one-fourth of whom are Black or, to use the federally recognized phrase, otherwise “socially disadvantaged.”

Soon thereafter, Senator Raphael Warnock, Democrat of Georgia, introduced (with Mr. Booker, Ben Ray Luján of New Mexico, and Debbie Stabenow of Michigan) the Emergency Relief for Farmers of Color Act, which would provide direct relief payments to help socially disadvantaged farmers pay off loan debts. With the active support of the U.S.D.A., Mr. Warnock’s bill, and some provisions of Mr. Booker’s, were then incorporated into the Covid relief bill.

That bill thus now includes $4 billion for direct relief payments that will help farmers of color recover from the pandemic and pay off their U.S.D.A. farm loan debts and related taxes, along with $1 billion to be used in part for addressing the longstanding inequality in access to U.S.D.A. programs.

This help for indebted Black farmers is a great step, but it’s hardly enough — and Mr. Booker and others recognize this. It’s time to also focus on the future, especially on what Black farmers need in order to stay and flourish on the land, and on how to establish new farmers.

A bigger land-grant program may soon get traction in Congress as an attempt to create a new generation of Black farmers. Imagine, for example, the federal government can buy land from farmers cashing out for retirement so that rather than being absorbed by existing large landholders, the land can be redistributed to smaller or beginning farmers of color, under easements that mandate sustainable practices. (An example of how this could work is the Northeast Farmers of Color Land Trust.)

Let’s note that the new proposals in the pandemic relief bill would serve to integrate Black farmers into an agricultural system that exists at the expense of the land’s original inhabitants. And it’s important to address where “new” land might come from, and how we begin to make amends to Indigenous people, an issue that the people with power these days would still likely prefer to avoid.

The current situation has Native American tribes at best buying back their lands and having the federal government hold them “in trust” for Native groups, which, as the food scholar Raj Patel says, is “akin to buying your car back from the thief who stole it, and then being told you can’t drive it until he says so.”

Sensible leadership to address this founding American injustice must come from the Native communities on the front lines and, as the environmentalist Winona LaDuke said, “The only compensation for land is land.”

But as a start, the relief bill would address some of the harm borne by long-suffering people and elevates the discussion to a place where we can begin to devise a better definition of justice. It could be a step toward real land reform, toward reparations to both African-Americans and Indigenous people, and toward healing the environment and agriculture itself, which offers one of the greatest opportunities to make everyone whole.

Mark Bittman, a former food columnist for The Times, is the author, most recently, of “Animal, Vegetable, Junk” and a faculty member at the Mailman School of Public Health at Columbia.