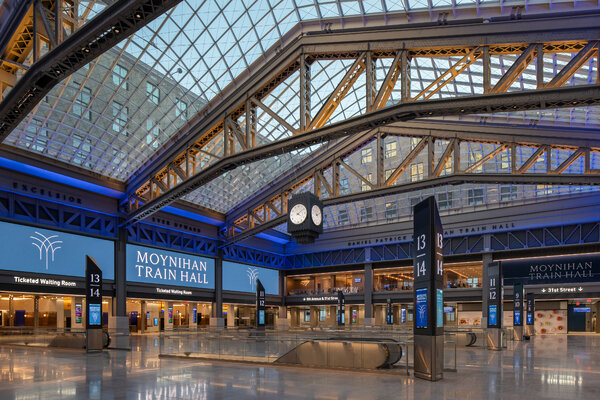 Let us celebrate the new Moynihan Train Hall while keeping our eyes on the prize. What is needed now is a fitting replacement for the subterranean rubble thrown to us when the original Pennsylvania Station was destroyed in 1963.

I was given a tour of the train hall’s progress as it emerged from those parts of the James A. Farley Post Office no longer in use, and was deeply impressed with the architectural team’s reverence for that building’s bones. They understood that the past is a guidepost that helps define our future.

When Charles McKim’s monumental gateway was reduced to memory, we lost a physical connection to our history. New York City has lived too long with the inadequate, pressed-down space that took its place.

It is time to build a fitting Pennsylvania Station, one that uplifts us as it serves a vital and complex city.

Lorraine B. Diehl
New York
The writer is the author of “The Late, Great Pennsylvania Station.”

The beautiful photograph accompanying your article reminds me of a statement often quoted about the destruction and replacement of Penn Station in the 1960s. The architecture historian Vincent Scully wrote: “One entered the city like a god. One scuttles in now like a rat.”

It is good that the Moynihan Train Hall evokes the grandeur of Penn Station’s main waiting room, lost in 1963. Even better from a historical standpoint, it is housed in a restored building, the James A. Farley Post Office, by the architects of the iconic original Penn Station: McKim, Mead & White.

Re “Limited Editions Meant to Be Dunked in Milk” (Thursday Styles, Dec. 17):

I can see why the company is so secretive about the team that comes up with these Oreo flavors. If I were the person who dreamed up Hot Chicken Wing Oreos, I wouldn’t want my name out there either.