On Nov. 6, an Ethiopian friend messaged me on WhatsApp: Prime Minister Abiy Ahmed had ordered airstrikes against the regional government in the country’s northernmost Tigray Province, bordering Eritrea and Sudan. I looked up from my phone screen in a daze. My friend was raging at the return of violence. “Why don’t these men give us a break?”

My father is Ethiopian and my mother is Eritrean. Their countries were at war for decades: Eritrean fighters fought for independence from Ethiopia from 1961 to 1991. My parents’ countries fought a second war between 1998 and 2000, which killed about 70,000 people.

A large part of my Ethiopian family, originally from the Welkait and Gondar regions of the country, lives in Humera, a border town in Tigray. The Tigrean ethnic group, which makes up about 6 percent of Ethiopia’s 110 million people, form a majority in the region.

Since Mr. Ahmed took office as prime minister in April 2018, the relationship between him and the Tigrean leadership has been defined by hostility and resentment. The Tigrean leadership had dominated Ethiopia’s ruling coalition since 1991. Although they brought economic prosperity, many accused the Tigray People’s Liberation Front of large-scale corruption and of using ethnicity to divide and weaken the opposition, to the point that Ethiopian politics was driven by ethnicity, not ideology or economic policy. The mass protests against Tigrean dominance led by the Oromo, the largest ethnic group in the country, and the Amhara, the second largest, saw Mr. Ahmed replacing the Tigrean leadership.

Prime Minister Ahmed started the military offensive after accusing the T.P.L.F. of attacking a federal military camp in Tigray. He declared a state of emergency there, cut off its internet and telephone lines, and blocked the roads. Soon after the airstrikes, the Ethiopian army and the T.P.L.F., which runs the regional government, fought intense battles in and around Humera, my father’s hometown.

I wrote to a cousin on Facebook to check on my aunt, her daughters and our extended family living in the border town. “My dad was visiting Humera when the fighting started but he managed to escape to Sudan,” my cousin told me. “A lot of people managed to flee to Sudan. And a lot have lost their lives sadly. Aunt and her daughters are all fine.”

Hundreds, possibly thousands have been killed, and about 40,000 people have already sought refuge in Sudan. United Nations agencies fear about 200,000 people might flee to Sudan in the coming months.

Like many other prime ministers and presidents in Africa, Mr. Ahmed had become the protagonist of a familiar story that can be written only in a familiar way, as if plagiarized from another African country, written in blood by politicians in pursuit of their ideologies and power at any cost. 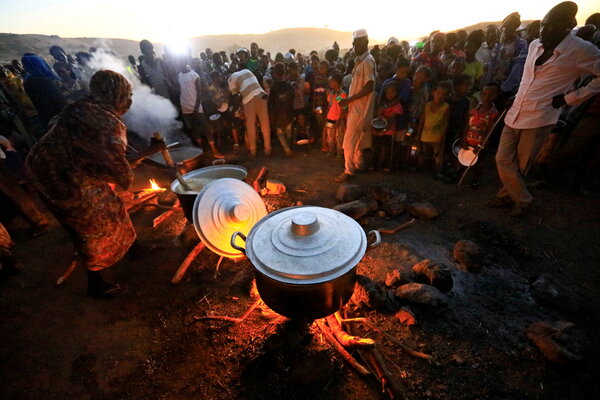 Mr. Ahmed was meant to be a new beginning. He promised to heal Ethiopia. He had the smile of Thomas Sankara, the charisma of Patrice Lumumba, and it seemed he embodied the patience for peace of Nelson Mandela.

Reforms followed swiftly. He appointed women to more than half of the ministerial positions in his government, invited a prominent dissident to return home and head Ethiopia’s election board, and ordered the release of political prisoners. He allowed partial privatization of state-owned companies. Journalists returned to work with their pens as free as the air of their country. And he made peace with President Isaias Afewerki of Eritrea, ending one of Africa’s longest-running conflicts, for which he received the 2019 Nobel Peace Prize.

Like many Eritreans, I couldn’t fully celebrate my parents’ two countries making peace. Mr. Afewerki is a dictator who has been terrorizing Eritreans and jailing fellow writers such as Dawit Isaac and Seyoum Tsehaye in containers placed in the desert. Mr. Afewerki’s reign of terror was given undeserved legitimacy.

At home, Mr. Ahmed entered into a direct confrontation with the T.P.L.F. and its leader Debretsion Gebremichael when he dissolved the ruling coalition and created a new party, the Prosperity Party, and purged key T.P.L.F. ministers. The feud reached a dangerous level when the T.P.L.F. held a regional vote defying Mr. Ahmed’s nationwide election ban because of the coronavirus pandemic.

On Nov. 9, a few days into the fighting, hundreds of non-Tigrean civilians were killed in Mai-Kadra, a town in Tigray. An investigation by Amnesty International confirmed the massacre of a very large number of civilians and cited witnesses who alleged the involvement of the Tigrean special police. Many of those killed in Mai-Kadra were from Welkite.

The news of the massacre brought back a childhood memory. One day in 1976, as my mother and my relatives recalled, our family was in Om Hajer, the town where I was born, on the Eritrean side of the border, about 20 miles from Humera. Rebel armies, including the Eritrean People’s Liberation Front, which was fighting for the territory’s independence from Ethiopia, moved around our hometown and other areas on the border. Lt. Col. Mengistu Haile Mariam, the Ethiopian dictator, vowed to unleash his terror on our town and its inhabitants.

That day in 1976, the Ethiopian Army ordered the people to gather in a field to hear an important government official deliver a speech. I often imagine my family preparing for the “important event,” but I quickly snap out of it. I do allow myself to imagine my father, a trader from a wealthy, landowning Ethiopian family, adoringly staring at my mother, the daughter of an Eritrean tailor, as she tied me to her back. My father held my brother’s hand, and my elder sisters followed us as we headed to the field. A family made up of two warring countries, love gluing its conflicted history into one.

There was no Ethiopian official but instead, soldiers with Kalashnikovs and machine guns waiting for us in the field. The overflowing Mereb river behind us blocked escape. Up to 400 died that day, including some of my family members. My parents survived the massacre but soon after, my father was murdered, under circumstances unclear to us to this day. We fled the country to Sudan and lived in two refugee camps for eight years, where I was raised by my Eritrean grandmother.

As the war started spilling into Eritrea — the T.P.L.F. has fired missiles at Asmara, the Eritrean capital, supposedly retaliating for Eritrea’s sending troops to support the Ethiopian military — I was increasingly worried about my grandmother and my mother, who live in Eritrea.

I called them repeatedly but I couldn’t get through. Being half Eritrean and half Ethiopian is to have your heart ripped in two, your mind split in pieces, your head continuously checking over both sides of the frontier. It is realizing that our bitter history seems to always shadow the future.

After repeated attempts I was able to reach my grandmother. “Just be patient,” she said. “Everything will be fine.” How long will we keep pretending that these words will shelter us from the machetes, the knives, the bombs?

I always fear that the Ethiopian politicians, the T.P.L.F. and the Eritrean leaders, all former soldiers, will not hesitate to unleash their military might against their own people, leading to numerous deaths and displacement.

Mr. Ahmed’s military is preparing for an offensive on Mekele, the capital of Tigray Province, which is still controlled by the T.PL.F. On Sunday, an Ethiopian military spokesman issued a chilling warning: “We want to send a message to the public in Mekele to save yourselves from any artillery attacks and free yourselves from the junta … After that, there will be no mercy.”

In the past two weeks, I have been looking at the pictures of refugees fleeing Tigray and waiting outside the United Nations refugee agency office at Hamdayet in Sudan, the place through which my family and I passed decades ago, on our way to a refugee camp further inland. I was struck by the eyes of young children. Their gazes retreat and shift, as if their wide eyes have already become the trenches into which they will hide their childhood.

I imagine their nights in the refugee camp, so familiar to me, feeling afraid, alone, their bodies shaking at the terror of what they saw, their minds about to age beyond their years. I wish I could speak to them, console them. I would also tell them that you will become bearers of a daunting history and the future of our countries because the ruins you have witnessed will give you the determination to continue and lend power to your voices to end these cycles of war.

Sulaiman Addonia is an Ethiopian-Eritrean-British writer and the author of the novel “Silence Is My Mother Tongue.”