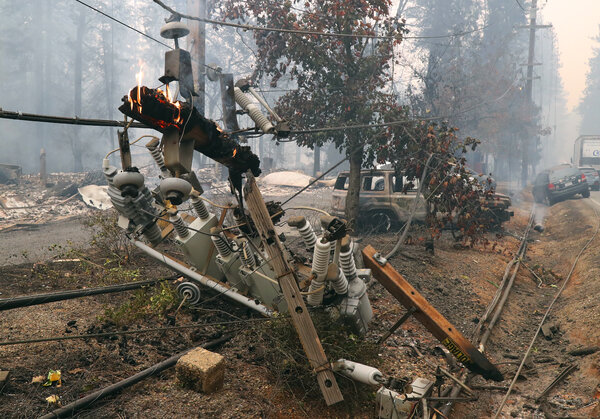 In 2018, Pacific Gas and Electric estimated that the rise in wildfires, partly driven by climate change, could cost the company $2.5 billion in payouts for recent fires started by its electricity transmission lines and other operations north of San Francisco, and as much as $15 billion in the future.

The company was wrong. The next year, PG&E filed for bankruptcy protection as it faced an estimated $30 billion in liability after company power lines ignited some of the most destructive fires in California history.

At least PG&E disclosed its perceived risks, however off target. Not every company tells its investors about the climate-related risks it faces. This is a shortcoming in government efforts to protect Main Street investors as the planet continues to heat up.

For investment managers like me, who oversees New York City’s pension funds, understanding those exposures is essential to mitigating risk across our portfolio to secure strong returns for the city’s public-sector workers. Yet under the current regulatory framework, investors are largely in the dark about those perils.

Fortunately, the Securities and Exchange Commission, under the leadership of its chairman, Gary Gensler, is considering a strong proposal for mandatory climate-risk disclosures by publicly traded companies. Although the agency has argued in the past that some of this information should be acknowledged under existing regulations, this rule would give investors standardized information to evaluate the financial risks of potential liability; damage from rising seas, higher temperatures and other climate consequences; shifts in public policy; and climate-related market shifts.

This is an important step. The United States is following Britain, France, Japan, Brazil, Switzerland, Canada, New Zealand and other countries in moving to mandate climate-risk disclosures.

Last year, damage from extreme weather events that each cost at least $1 billion, including wildfires, floods and hurricanes, resulted in $148 billion in damage in the United States alone. A 2019 report by CDP, a nonprofit that measures climate risks, found that those dangers could cost 215 of the world’s leading companies as much as $1 trillion in combined losses, much of it over the next five years. In recent years, climate change has been identified as the area of highest risk to society and the global economy by the World Economic Forum.