The Treasury Department last month imposed sanctions on four people linked to Russia for attempting to influence the presidential election, including a Ukrainian parliamentarian named Andriy Derkach, who has worked with Donald Trump’s consigliere Rudy Giuliani to smear Joe Biden. According to the Treasury, Derkach has been “an active Russian agent for over a decade, maintaining close connections with the Russian intelligence services.”

According to The Washington Post, U.S. intelligence agencies warned the White House last year that Giuliani, then searching in Ukraine for dirt about Biden and his son Hunter, was the target of a Russian influence operation. “The Russians have been cultivating Rudy Giuliani as an asset for over a year,” Chris Murphy, a Democrat on the Senate Foreign Relations Committee, told me. “Any information proffered by Rudy Giuliani is likely compromised.” 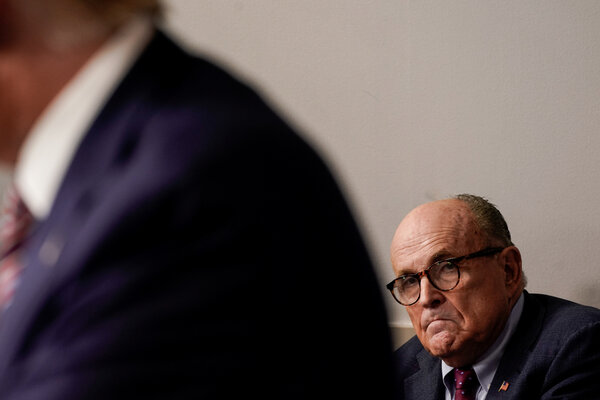 That, of course, did not stop The New York Post from publishing a series of breathless articles about Hunter Biden purportedly based on a hard drive that fell into Giuliani’s hands. Some of the stories — like one about Hunter’s anguished texts to his father from rehab — seem intended to wound Joe Biden by humiliating his child. Others were meant to resurrect the discredited accusation that Joe Biden pressed for the firing of a Ukrainian prosecutor to help Burisma, an energy company that had Hunter Biden on its board.

So far, the Hunter Biden laptop affair is a farcical retread of the Russian hack-and-leak operation that helped torpedo Hillary Clinton’s presidential aspirations in 2016. Now, as then, the Trump campaign appears to be hoping that the media will dribble out stolen private messages over the final weeks of the campaign, creating an illusion of scandal where none exists. And now, as then, someone in Trump’s inner circle is working directly with someone who is, at least according to the U.S. government, a Russian agent.

Since The New York Post began publishing its Hunter Biden articles, there’s been an escalating chorus of conservative whining about the mainstream media’s refusal to pick up its reporting. “Media avoiding The Post’s Hunter Biden stories as much as Joe,” says the headline on a self-pitying Post column.

Most reputable reporters aren’t taking the bait; Giuliani’s trove is just too sketchy. As The New York Times reported, the journalist who wrote one of The Post’s big Hunter Biden stories refused to put his byline on it out of concerns about the credibility of the underlying information. Mediaite reported that Giuliani initially offered the data to Fox News, but “the news division chose not to run the story unless or until the sourcing and veracity of the emails could be properly vetted.”

The provenance of the alleged hard drive is murky, and the F.B.I. is reportedly investigating whether it’s linked to a foreign disinformation campaign. Giuliani claims his lawyer got it from a Delaware computer repair shop owner, John Paul Mac Isaac, who says someone he thinks was Hunter Biden dropped off three laptops and never picked them up. Mac Isaac gave a halting interview to several journalists last week; The Daily Beast published the audio, so you can hear for yourself as his story shifts over the course of an hour.

If there’s an important story here, it’s almost certainly about Giuliani’s dirty tricks, not any wrongdoing by Joe Biden. Reporting on disinformation is complicated, because it’s hard to write about it without amplifying it. Still, this episode distills just how far Trump has dragged the country down in four years.

In 2016, the public didn’t know that Paul Manafort, Trump’s former campaign chairman, was passing polling data to someone tied to the Russian intelligence directorate — such a revelation would have been devastating. Giuliani’s relationship with Derkach, by contrast, is out in the open.

Last week Giuliani told The Daily Beast he thinks there’s only a 50 percent chance that his Ukrainian collaborator is really a Russian spy, and that it wouldn’t matter to him if his Hunter Biden material was linked to Russian hacking. This barely made a ripple. “It’s collusion in broad daylight,” said Murphy.

Giuliani probably can’t sabotage Biden the way WikiLeaks sabotaged Clinton. The Clinton leak was damaging because many voters already believed there was something sinister about her hidden emails. Burisma never stuck to Biden in the same way, so there’s less payoff in forcing it back into the news.

But Giuliani’s tactics aren’t any less foul for being ineffective. It’s hardly surprising that the president’s bottom-feeding lawyer has shown himself open to working with Russian intelligence. It’s striking, though, that no one expects better.