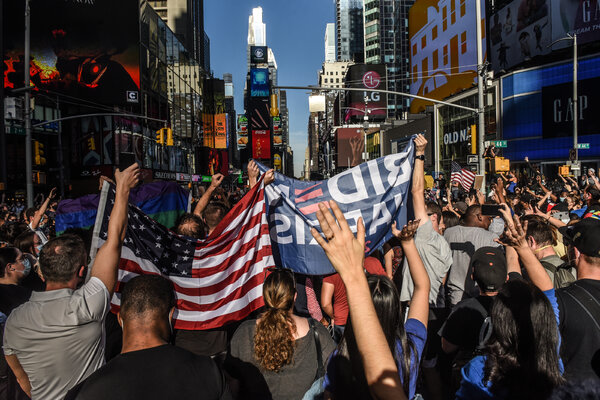 By Thomas B. Edsall

Over the 20-year period from 1970 to 1990, whites, especially those without college degrees, defected en masse from the Democratic Party. In those years, the percentage of white working class voters who identified with the Democratic Party fell to 40 percent from 60, Lane Kenworthy, a sociologist at the University of California-San Diego, wrote in “The Democrats and Working-Class Whites.”

Now, three decades later, the Democratic Party continues to struggle to maintain not just a biracial but a multiracial and multiethnic coalition — keeping in mind that Democrats have not won a majority of white voters in a presidential election since Lyndon Johnson’s landslide victory in 1964.

There have been seven Democratic and seven Republican presidents since the end of World War II. Obstacles notwithstanding, the Democratic coalition has adapted from its former incarnation as an overwhelmingly white party with a powerful southern segregationist wing to its current incarnation: roughly 59 percent white, 19 percent Black, 13 percent Hispanic, and 8 percent Asian American and other groups.

William Julius Wilson, a sociologist at Harvard, put the liberal case for the importance of a such a political alliance eloquently in “Rising Inequality and the Case for Coalition Politics”:

An organized national multiracial political constituency is needed for the development and implementation of policies that will help reverse the trends of the rising inequality and ease the burdens of ordinary families.

Biden won with a multiracial coalition, but even in victory, there were signs of stress.

In their May 21 analysis, “What Happened in 2020,” Yair Ghitza, chief scientist at Catalist, a liberal voter data analysis firm, and Jonathan Robinson, its director of research, found that Black support for the Democratic presidential nominee fell by 3 percentage points from 2016 to 2020, and Latino support fell by eight points over the same period, from 71 to 63 percent.

At the same time, whites with college degrees continued their march into the Democratic Party: “The trends all point in the same direction, i.e., a substantial portion of this constituency moving solidly toward Democrats in the Trump era.” Among these well-educated whites, the percentage voting for the Democratic nominee rose from 46 percent in 2012 to 50 percent in 2016 to 54 percent in 2020. These gains were especially strong among women, according to Catalist: “White college-educated women in particular have shifted against Trump, moving from 50 percent Democratic support in 2012 to 58 percent in 2020.”

In a separate June 2021 study, “Behind Biden’s 2020 Victory,” by Ruth Igielnik, Scott Keeter and Hannah Hartig, Pew Research found that

Even as Biden held on to a majority of Hispanic voters in 2020, Trump made gains among this group overall. There was a wide educational divide among Hispanic voters: Trump did substantially better with those without a college degree than college-educated Hispanic voters (41 percent vs. 30 percent).

Crucially. all these shifts reflect the continuing realignment of the electorate by level of educational attainment or so-called “learning skills,” with one big difference: Before 2020, education polarization was found almost exclusively among whites; last year it began to emerge among Hispanics and African Americans.