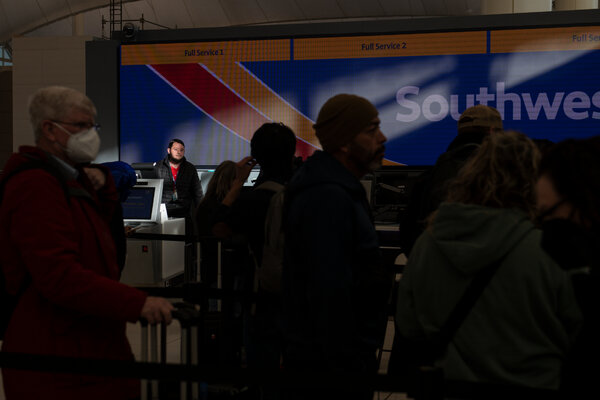 Americans are furious with Southwest Airlines, and understandably so. Severe weather always disrupts air travel, but Southwest was the only major airline to suffer a near-complete collapse of service in the wake of the recent mega-storm, stranding thousands of passengers. As of Thursday, as other carriers were more or less back to normal, Southwest was still operating fewer than half its scheduled flights.

How did this happen? To be honest, I’d love to write a scathing, muckraking column about the destructive effects of corporate greed. But that doesn’t seem to be the main story here.

To be clear, greed surely played some role in the disaster. Most obviously, Southwest hadn’t spent the money needed to upgrade a scheduling system many people inside the airline knew was inadequate. Instead, before the pandemic it spent billions on stock buybacks.

Let me also add that nothing I say here should be taken as an argument against demanding that Southwest compensate the travelers it failed, not just as a matter of fairness but to create the right incentives. If we want companies that serve the public to spend money to reduce the risks of catastrophic failure, we need to ensure that they pay a high price when they let their customers down.

Yet righteous anger shouldn’t stop us from trying to understand why, exactly, things went so wrong.

The roots of Southwest’s unique meltdown go back all the way to 1978, when the airline industry was deregulated. Until then, interstate carriers were basically forced to offer direct, “point to point” service between cities. After deregulation, most major airlines shifted to “hub and spoke” systems, which had many passengers changing planes at major centers like Chicago’s O’Hare or Atlanta.

Hub-and-spoke has some clear advantages over point-to-point. It lets airlines service the same number of cities with fewer routes — connecting 10 cities point-to-point requires 45 routes but sending everyone via a central hub requires only nine. The system also creates some inherent flexibility because planes and flight crews based at hubs can be reallocated to compensate for, say, equipment breakdowns.

But a hub-and-spoke system has disadvantages, too. It can force passengers to accept long layovers or, alternatively, miss tight connections if anything goes wrong. (Dear American Airlines: No, I did not appreciate my recent involuntary night in Miami.) Hub-and-spoke has also enhanced airlines’ monopoly power, with each big carrier dominating markets served by its hubs.

In response to these disadvantages, on the eve of the pandemic some airlines were moving partly back to point-to-point. Southwest, however, had never left that system. Alone among major carriers, it mostly flew people straight from origin to destination, without the need to change planes along the way.

Partly as a result, Southwest had relatively low costs, some of which were passed on in the form of cheaper fares. Patrons generally liked its service: In 2022 Southwest’s economy class (it doesn’t offer business class) led J.D. Power’s rankings for customer satisfaction.

But point-to-point turns out to be especially vulnerable to extreme disruptions. Snow and bitter cold evidently left most of Southwest’s planes and personnel stranded in scattered locations, unable to resume normal service even when the weather let up. Again, as I write this the airline is still trying to put the pieces back together.

Antiquated technology that left Southwest unable even to find many of its crew members, plus the absence of agreements that would have made it possible to rebook passengers on other airlines, made it worse. But these were only exacerbating factors. Basically, a system that has some real advantages in normal times fell apart when it encountered, well, a perfect storm.

Are there any broader lessons from this disaster?

Some analysts have suggested that Southwest’s debacle reflected a widespread managerial culture that encourages “cheeseparing” — increasing profits by slicing off costs until there’s no margin for error. For example, a relentless focus on holding down expenses was at the root of worker anger that almost shut down America’s freight railways not long ago.

I’m sympathetic to that view. We’d probably all be better off if corporations were less focused on their short-term bottom lines and more willing to invest in resilience. And public policy should do what it can to promote such investment.

Beyond that, what happened at Southwest is another reminder that, for all the talk of an information age, we’re still living in a material world. Notably, there’s a clear family resemblance between the Southwest meltdown and the supply chain crisis of 2021-22, when a constellation of unusual events left many of the shipping containers central to modern commerce stranded in the wrong places.

If you’re an affluent American, it can sometimes seem as if you’re already living in the metaverse: Click on your mouse and whatever you need arrives at your door. But there’s a lot of physical action, and real-world labor, going on behind the scenes. And we forget that reality at our peril.