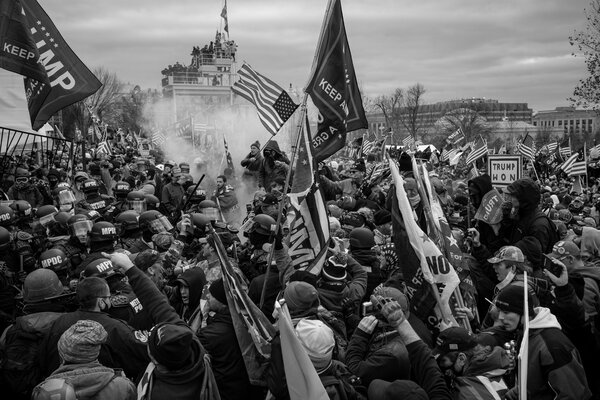 Mr. Nwanevu, a journalist, has covered the assault on voting rights in Texas and elsewhere. He is writing a book about American democracy.

In December 1972, the critic Pauline Kael famously admitted that she’d been living in a political bubble. “I only know one person who voted for Nixon,” she said. “Where they are, I don’t know. They’re outside my ken.” A pithier version of her quote (“I can’t believe Nixon won. I don’t know anyone who voted for him.”) has been used to exemplify liberal insularity ever since, both by conservative pundits and by the kind of centrist journalists who have spent the past several years buzzing in the ears of heartland diner patrons, looking for clues about Donald Trump’s rise.

The most important fact about the Trump era, though, can be gleaned simply by examining his vote tallies and approval ratings: At no point in his political career — not a single day — has Mr. Trump enjoyed the support of the majority of the country he governed for four years. And whatever else Jan. 6 might have been, it should be understood first and foremost as an expression of disbelief in — or at least a rejection of — that reality. Rather than accepting, in defeat, that much more of their country lay outside their ken than they’d known, his supporters proclaimed themselves victors and threw a deadly and historic tantrum.

The riot was an attack on our institutions, and of course, inflammatory conservative rhetoric and social media bear some of the blame. But our institutions also helped produce that violent outburst by building a sense of entitlement to power within America’s conservative minority.

The structural advantages that conservatives enjoy in our electoral system are well known. Twice already this young century, the Republican Party has won the Electoral College and thus the presidency while losing the popular vote. Republicans in the Senate haven’t represented a majority of Americans since the 1990s, yet they’ve controlled the chamber for roughly half of the past 20 years. In 2012 the party managed to take control of the House even though Democrats won more votes.

And as is now painfully clear to Democratic voters, their party faces significant barriers to success in Washington even when it manages to secure full control of government: The supermajority requirement imposed by the Senate filibuster can stall even wildly popular legislation, and Republicans have stacked the judiciary so successfully that the Supreme Court seems poised to overturn Roe v. Wade, an outcome that around 60 percent of the American people oppose, according to several recent polls. Obviously, none of the structural features of our federal system were designed with contemporary politics and the Republican Party in mind. But they are clearly giving a set of Americans who have taken strongly to conservative ideology — rural voters in sparsely populated states in the middle of the country — more power than the rest of the electorate.