In 2017, after the Portland, Ore., police fatally shot her 17-year-old grandson, Donna Hayes got invited to City Hall to meet Mayor Ted Wheeler, who expressed his deepest sympathies. He had been in office for only seven weeks.

“I actually felt sorry for him,” Ms. Hayes told me. But since then, no police officer has been punished for Quanice Hayes’s death. And other Black men have been fatally shot by Portland police. And this summer, amid protests against racial injustice in policing, Portland police officers have tear-gassed and injured protesters.

“I stopped feeling sorry for him,” said Ms. Hayes, who has been an active participant in the protests. “I told our mayor that if he didn’t want the city destroyed, he better do something.”

After a summer of mass protests around the country in the wake of George Floyd’s death, numerous mayors are under pressure from activists who are furious with their police departments. Seattle’s mayor, Jenny Durkan, is facing calls for her resignation because of police treatment of protesters. Mayor Jacob Frey of Minneapolis was booed by a crowd outside his home after he refused to say he supported dismantling the police. Mayor Lyda Krewson of St. Louis had to move out of her home temporarily after hundreds of protesters showed up outside, chanting “Resign Lyda, take the cops with you.”

The full political impact of the protests has yet to be seen. The mayors of Seattle, Minneapolis and St. Louis are up for re-election next year. But in some cities that have been roiled by protests, next week’s election provides the first chance voters have to cast a ballot since the protests.

In Richmond, Va., Mayor Levar Stoney initially struggled with allegations that his police department had used excessive force to put down the protests, which led to the ousting of the city’s police chief. Protesters banged pots and pans outside Mr. Stoney’s downtown apartment building, chanting “Sellout Stoney.” (Mr. Stoney is Black.) But since then, he appears to have regained his footing after removing Confederate statues, and now appears headed for re-election. In Baltimore, the front-runner in the race for mayor, the City Council president Brandon Scott, who is also Black, has expressed solidarity with the protesters.

But in Portland, Mr. Wheeler, a white man who was once seen as a potential candidate for governor, is fighting for his political life. He has struggled to respond to more than one hundred days of continuous protests that have increasingly turned violent.

As much as protesters detest President Trump, who sent federal agents to snatch them off the street in an effort to quell the unrest, protesters in Portland have focused much of their ire on Mr. Wheeler.

That’s understandable. Mayors have a huge role to play in the vital task of reimagining public safety, as a recent report from the United States Conference of Mayors makes clear. Although mayors face external barriers to police reform, including state laws that make it difficult to punish abusive officers, they are still responsible for laying out a vision of how public safety should work. Mayors can lead the charge on changing clauses in police union contracts that make it all but impossible to punish or fire abusive officers, as Mayor John Cranley of Cincinnati is seeking to do. They can work to establish meaningful civilian review boards to oversee complaints against the police, as Mayor Ras Baraka of Newark is trying to do. They can highlight the need to address economic disparities that underlie racial disparities in policing, as Mayor Lori Lightfoot has done in Chicago.

Although those mayors are not up for re-election this year, their actions show that changing police culture requires both the external pressure of protests and the internal pressure from elected leaders inside government. That’s why activists who have spent their summer protesting racial injustice should make sure to vote, no matter how disillusioned with government they might be.

That’s especially true in Portland, which operates under a quirky system that gives the mayor the power to dole out control of city departments to citywide elected officials. Traditionally, mayors keep the police portfolio for themselves. That means Mr. Wheeler is also the city’s police commissioner. That has made it impossible for him to escape blame for the rough treatment that protesters are receiving at the hands of the police over months of continuous protests. 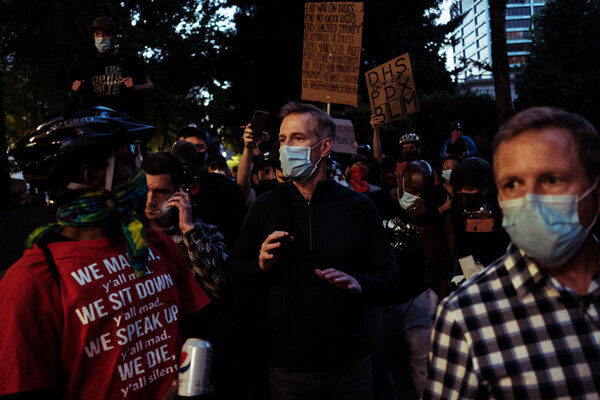 While the Portland protesters disagree about many things — from what policing should look like to what tactics should be used to pressure the city — they seem united in their rage against Mr. Wheeler. This fall, on his birthday, they swarmed his condo building, broke windows, vandalized a dentist’s office on the first floor and tossed a burning bundle of newspapers inside, according to The Oregonian. Mr. Wheeler has done some things to restrain police, such as ban tear gas and support a ballot measure that would create an oversight board, but he is still widely seen as mishandling the protests.

As recently as May, Mr. Wheeler seemed popular and headed for certain re-election. During the city’s nonpartisan primary, he garnered about twice as many votes as his closest challenger, Sarah Iannarone, and almost avoided a runoff. But after a summer marked by protests, riots, and vigilantism, a recent poll shows him neck-and-neck with Ms. Iannarone, a self-described antifascist who has never held elective office. Many young people are excited about Ms. Iannarone, who has pledged to break with tradition and give the police portfolio to Portland’s city commissioner, Jo Ann Hardesty. Ms. Hardesty, a Black woman who has worked on police reform for decades and won citywide election in 2018, has put forward practical proposals to improve public safety, including using trained mental health professionals instead of the police to handle emergency calls involving mental illness and homelessness.

If Mr. Wheeler is defeated, he will be the fourth mayor of Portland to leave office after only one term. The last three mayors did not even seek re-election, which indicates that being mayor of Portland might be an especially miserable job.

Lyndon B. Johnson once famously quipped, “When the burdens of the presidency seem unusually heavy, I always remind myself that it could be worse — I could be a mayor of a city instead.” The twin crises of Covid and racial justice protests have made that sentiment only ring more true.

Bringing meaningful reform takes time, stamina and often experience at managing a city. There’s a limit to what a mayor can accomplish in one term. If activists want change, they must elect leaders they believe in and team up with them through the long and inevitably difficult political process of changing the way police departments are run. Protests alone can’t do what needs to be done.