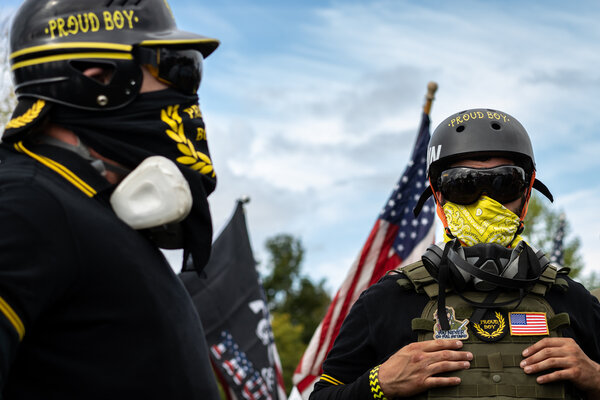 It appears that the love affair between the Proud Boys and Donald Trump is done. They’re over him. Mr. Trump betrayed the Proud Boys by denouncing their violent attack on the Capitol after he had encouraged them. And he failed to issue any pardons to them for their attempted insurrection.

The Proud Boys should have known better. Mr. Trump has a long history of tossing loyalists under the Trump bus once they’re no longer useful to him. At least the Proud Boys finally see him for what he is and has always been — in their own words, an “extraordinarily weak” man.

Perhaps there’s hope that they’ll also see that their own agenda to effect change by sowing chaos in this country is wrongheaded and ultimately against their own best interests.

Pass this on to the Proud Boys: Donald Trump was never a tough guy. He just plays one on TV.

Donald Trump left the White House a defeated man. He left unable to admit to, let alone face, the reality of his destructive actions.

On Wednesday the country celebrated the victory of its system of democracy, a democracy that suffered damage but withstood Mr. Trump’s self-serving attacks, proving that its greatness was not in need of remaking. Indeed, from the courts to the people’s vote, the integrity of our system of government held strong when it counted.

What Mr. Trump did not count on was this thing called truth, and this other thing called consequences. For perhaps the first time in his life, he could not bully, lie and cheat his way to evading responsibility. And that is the greatness of a flawed but real democracy. Truth prevails.

The ‘Gatsby’ Stereotype of Wealth

“The Great Gatsby” is a great American novel, but it has also solidified a stereotype of money and class that contributes to today’s “us versus them” mind-set.

When Nick Carraway and Jay Gatsby are the only affluent folks we know, our view of wealth is dangerously narrow. Instead of further solidifying clichés, we need to move money out of the taboo category and have honest conversations at a personal level.

Let’s read “Gatsby” as a novel rather than viewing its characters as more real than reality.

Jennifer Risher
San Francisco
The writer is the author of “We Need to Talk: A Memoir About Wealth.”