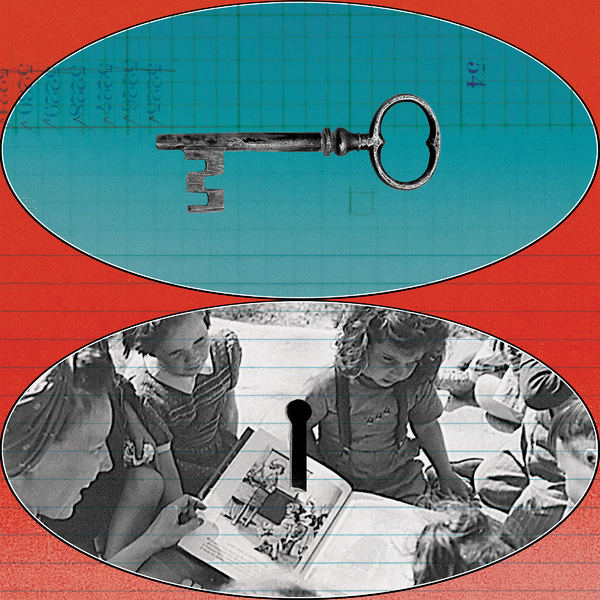 The most important thing schools can do is teach children how to read. If you can read, you can learn anything. If you can’t, almost everything in school is difficult. Word problems. Test directions. Biology homework. Everything comes back to reading.

But a lot of schools aren’t teaching children how to read. It came as a shock to Corinne Adams. “Public school should be this sacred trust between the community and the school,” she told me. “I’m going to give you my child, and you’re going to teach him how to read. And that shattered for me. That was broken.”

Her son was in kindergarten in Rhode Island when schools closed because of the pandemic. She sat next to him and watched as he was taught to read over Zoom. In kindergarten and again in first grade, her son and his classmates were taught that when they came to a word they didn’t know, they should look at the first letter, look at the picture in the book and think of a word that would make sense. They weren’t told to sound out the word.

Ms. Adams encountered a method for teaching children how to read that is contradicted by decades of scientific research and yet remains popular in schools. As many as a quarter of elementary schools use Units of Study, the curriculum her son’s school was following. Far more schools teach the same word-reading strategies as part of an approach to teaching reading broadly known as balanced literacy. In a 2019 survey by Education Week, 72 percent of elementary special education and K-2 teachers said their schools used balanced literacy.

These word-reading strategies are a crutch, kind of like training wheels, that allow children to “read” books without knowing how to actually read the words. They’re based on the belief that most children will eventually figure out how to read words and spell them if they spend enough time with books.

But research shows that children need to be taught how their written language works. It doesn’t happen naturally through exposure to print. Some kids learn easily; they don’t need much instruction. But learning to read is hard for more children than you might realize.

It’s not about intelligence. Lots of very smart people have a tough time learning how to read. G. Reid Lyon, a former chief of child health and human development at the National Institutes of Health, told Congress in 1998 that learning to read is a “formidable challenge” for about 60 percent of children. They need direct and explicit instruction. Lots of children weren’t getting that kind of instruction in 1998. And they’re still not getting it.

Here’s what happens in response: Parents who notice there’s a problem take care of it themselves. If they can.

By the fall of her son’s first-grade year, Ms. Adams was very worried about him. He could memorize simple books and use the pictures if he was stuck on a word, but he couldn’t read the words out of context. He was frustrated and falling behind. So she decided to teach him herself. She was a stay-at-home mother who had time to figure out what she needed to do and money to buy books and teaching materials. Other parents turn to private tutoring, which can cost hundreds of dollars an hour.

“The families will provide the safety net,” said Todd Collins, a school board member in Palo Alto, Calif., where the median household income for parents of children in public school is close to a quarter of a million dollars a year. “If we fail in something fundamental like reading, you can be damn sure the parents will hire a tutor or put them in private school or the kid will get taught at home. And that kid will learn to read.”

This exacerbates inequality in an already unequal education system. And I think it’s one reason reading programs that aren’t providing adequate instruction have remained popular for so long. People point to good test scores in an affluent district that is using one of these programs, and they say: Look, it’s working. And they point to low test scores in a poor district using the same program and say: Oh, it’s poverty.

But all kinds of kids, from all kinds of families — rich, poor and middle class — need more help with reading than they’re getting in school. On the most recent National Assessment of Educational Progress, 65 percent of fourth graders scored basic or below basic in reading.

There’s increasing awareness that many children are struggling because they’re not getting the instruction they need. At least 30 states have instituted new policies or laws to try to bring schools in line with the science of reading. Some of that change has been fueled by reporting done by me and other journalists. It’s also been fueled by parents — many of them in affluent school districts — who have been speaking up about their children’s reading difficulties.

And a big push is coming from teachers, too. Many of them are ditching the word-reading strategies and asking their schools for new materials and better training, both of which are expensive.

Ms. Adams thinks often about what might have happened to her son if she hadn’t intervened. And she thinks about parents who may have no idea their children aren’t getting the instruction they need — or might not have the means to fix the problem even if they do.

“That’s wrong,” she told me. “Your kid should go to school and learn how to read. Baseline. Because if they can read, they can teach themselves anything.”

Emily Hanford (@ehanford) is a senior education correspondent for American Public Media. She is working on “Sold a Story,” a new podcast about how teaching kids to read went so wrong.