Watching the recent surge of women’s sports enthusiasts clamoring to save female athletes from the transgender rights movement, it’s hard not to feel a little wistful.

This year, lawmakers in more than 20 states have introduced legislation to ban transgender kids from girls’ sports, under the guise of protecting women and girls. Bills have already passed in Mississippi and Idaho.

The quest to block trans girls from competition has some prominent supporters.

The cause is catching on: One recent Politico poll found that 46 percent of women support a ban on transgender athletes (as do 43 percent of young adults born since 1997). This is disappointing. We might look to champions like Megan Rapinoe, Billie Jean King and Candace Parker, who have been outspoken supporters of inclusion, as well as trans athletes who are shouldering the brunt of this fight. Exclusion elevates nobody.

This controversy hurts, because female athletes of all backgrounds have been spending decades fighting for equal treatment — and we are still far from winning. The conversation is disingenuous, patronizing and often racist. Using our struggle to score political points is a distraction.

In her essay, Ms. Haley argued, “The game is being rigged against women and in favor of biological men.” But the game has always been in favor of men.

The debate around transgender rights in sports feels sometimes like fighting over bunk beds on the Titanic. In almost every case, as soon as money and power are involved, women’s sports take a back seat to men’s. You can even see it in our language: We call them “women’s sports,” whereas men’s sports can just be “sports.”

Consider last week: As the N.C.A.A. basketball tournaments began, female players demanded to know why the weight room in the men’s bubble had state of the art lifting equipment, whereas they got a stingy rack of dumbbells.

A new weight room was hurriedly arranged — with no serious discussion of why the problem arose in the first place.

It is so deflating. Women’s sports get attention when there’s an egregious slight against us, such as when the world champion women’s national soccer team sued for pay equal to the men’s team, which failed to qualify for the World Cup. The other time is when we achieve something so unlikely that it inspires everyone else, such as when we play against men.

That means we get less coverage of us simply playing sports. When the journalist Brenna Greene looked for photos from the women’s basketball tournament this week, she found the N.C.A.A. hadn’t posted any. But its cache of men’s photos was full. (As with the weight room, the organization reacted to criticism and finally put up photos from the women’s games.)

These disparities are what the people who say they care about women’s sports should be worrying about.

Male players’ generous March Madness accommodations do not make news, because they are expected. That is because the men’s tournament gets extensive coverage, with the N.C.A.A. earning more than 20 times as much from the television rights for the men’s tournament as from its separate contract that includes rights to the women’s event. The system is set up this way. Investment follows, and inequality grows.

The big news in men’s sports last week highlighted how staggeringly lucrative its coverage has become: The N.F.L. signed new media deals worth over $100 billion. Of course, that sport is played, managed, covered — and valued — almost entirely by men.

The only time I remember seeing an elite women’s track race on a front page in recent years is when one of the women in the race was framed as a threat.

It was not a coincidence that the athlete — Caster Semenya, a champion intersex sprinter from South Africa — is Black. Images of her competing incubated the American campaign against trans participation in sport, which is also racist. Many of the trans high school athletes under scrutiny are Black. The outcry surrounding Semenya, and the invasiveness — discussion of her testosterone, her sexuality — became a template for the anti-trans campaign we see now.

In 2019, I noticed that in the front-page photo of Semenya, the women racing her were pictured but not named. They are Kate Grace from the United States, Noélie Yarigo from Benin and Lynsey Sharp from Britain — some of the best athletes in the world. You may not know their names because our attention is misplaced. But if you claim to fight for female athletes, you should begin by knowing who they are.

The dialogue around trans women’s participation in sports implies that they are invading women’s sports for a competitive advantage. Competing for what? Crumbs.

Some lawmakers have the audacity to give their bills names like the Fairness in Women’s Sports Act.

If things were fair, any time we raved about LeBron James or Usain Bolt, we would also be watching Candace Parker pirouette with a basketball and Allyson Felix sprinting toward an unfathomable fifth Olympics. These women should be household names, but many sports fans have never heard of them.

At the last Olympics — where resources are equally divided among men’s and women’s teams — women earned more than half of American medals. You could argue that we deserve more resources, not less. And yet many Americans wring their hands over transgender inclusion. They are missing the point.

The science is still catching up to this conversation. So for now, we are navigating policies largely based on values. That is why we get bills that exclude while citing an arbitrary interpretation of “fairness.”

Perhaps the bills’ names are apt. As many female athletes know, the game has never been truly fair. 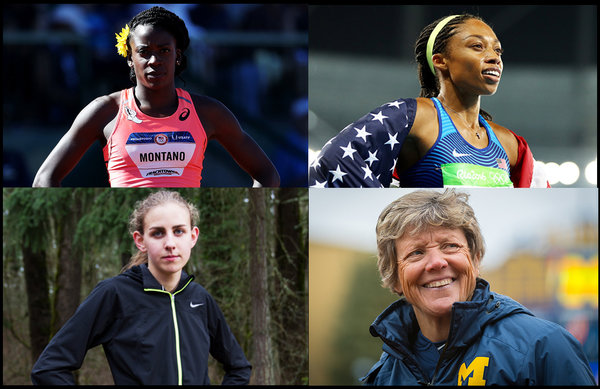 “Equal Play” is an Opinion video series showcasing the insurgent athletes and coaches who are dragging women’s sports into the 21st century.

Lindsay Crouse (@lindsaycrouse) is an editor and producer in Opinion.