The Tulsa, Okla., police department set the stage for mass murder in the spring of 1921 when it deputized members of a mob that invaded and destroyed the prosperous Black enclave of Greenwood. The armed marauders who swept into the community in the early hours of June 1 wreaked havoc in the spirit of a police directive that urged white Tulsans to “Get a gun, and get busy and try to get a nigger.”

They murdered at will while forcing Black families from their homes. They looted valuables that included jewelry, furs and fine furnishings. They used torches and oil-soaked rags to set fires that incinerated homes, churches, doctors’ offices, hotels and other businesses across an area of 35 square blocks.

The first day of June was less eventful on the other side of the tracks, in white Tulsa’s business district. In his 1968 memoir, “Oklahoma Boy,” Ross Warner recalls that his work took him to the First National Bank building, on the corner of Fourth Street and Main. “From time to time on June 1,” he writes, “we heard sirens and, on looking out of the window, saw trucks headed south on Main Street with Negro bodies in them. We saw at least 30 or 40 hauled away in this fashion.” 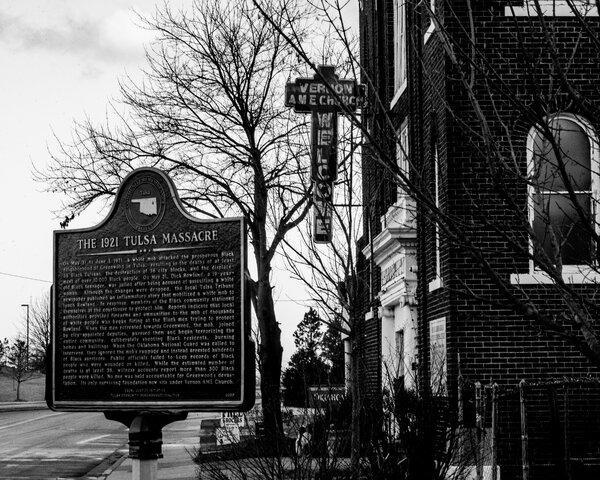 A few years after the appearance of “Oklahoma Boy,” the Tulsa County undersheriff, E.W. Maxey, told a local historian that as a teenager he, too, had been present on Main Street that day in 1921. He recalled seeing five or six trucks moving up the street carrying Black bodies “stacked up like cordwood.” He had no idea where the dead were taken but presumed they were being hauled “out somewhere” to be disposed of in ditches.

Two months ago, an archaeological team unearthed a mass grave in Tulsa that may answer questions that have troubled the city’s sleep for a century. The time-consuming forensic analysis required to definitively link the dead to the massacre could begin next year. Nevertheless, the team has a “high degree of confidence” that this previously unrecorded burial site is one of the locations that it had been searching for. The fact that burial workers installed stairs in the trench suggests that there were quite a few dead to move.

Kary Stackelbeck, the Oklahoma state archaeologist, estimates that the grave shaft could contain 30 coffins — and perhaps more if the coffins uncovered in this phase of the excavation are resting upon another row. Speaking during a presentation in November, Ms. Stackelbeck described the scene as “haunting,” adding that the stairs allowed her “to visualize people moving in and out of that space to put these coffins in place.”

The discovery of a mass grave, within the city-owned Oaklawn Cemetery, comes as Tulsa is bracing for an emotional centennial commemoration of the massacre. The city is also facing a lawsuit that seeks reparations.

The star plaintiff, 106-year-old Lessie Benningfield Randle, according to the lawsuit, asserts that she witnessed the conflagration and still experiences flashbacks of the “Black bodies that were stacked up on the street as her neighborhood was burning.”

The suit also features plaintiffs who are descended from well-known members of Tulsa’s early-20th-century Black elite. The real estate titan J.B. Stradford, who lost an empire that included the renowned Stradford Hotel, is represented by a great-granddaughter. The influential newspaper publisher A.J. Smitherman, who saw the press and offices of his paper, The Tulsa Star, destroyed, is represented by a grandson. The surgeon A.C. Jackson, who was murdered by marauders after surrendering with his hands raised, is represented by a nephew.

The federal courts dismissed a similar lawsuit in 2004, ruling that the survivors had waited too long to bring their case. This new suit, filed in September, is based on the premise that the plaintiffs continue to suffer harm. Even if this reparations attempt fails, it will serve as reminder that the victims of 1921 were denied justice by a court system that had been infiltrated by the Ku Klux Klan.

A Conspiracy of Silence

After the massacre, Tulsa buried the dead quickly — in a heat wave — to stave off disease. It then lost touch with the dead through a pervasive act of willful forgetting. The powers that be in the white city suppressed news of the event, first to protect Tulsa’s image as a safe place to do business and then to shield sons, brothers and uncles who had heeded the call to kill, loot and burn. Men who had marauded through the streets when they were in their 20s had all the more reason to marginalize the truth once they became gray-haired pillars of the Chamber of Commerce.

White Tulsans who wanted the story of the massacre to stay buried resorted to intimidation when necessary. A radio host who signed on to write a magazine story timed to the 50th anniversary of the disaster received harassing phone calls, both at home and at work, and was menaced by strangers. He woke up one morning to find the words “best look under your hood from now on” scrawled in soap across the windshield of his Ford sedan.

The process of willful forgetting worked differently on the African-American side of the tracks. In his forthcoming book, “The Ground Breaking: An American City and Its Search for Justice,” the historian Scott Ellsworth writes that some Black survivors suffered post-traumatic stress disorder and avoided discussing what had befallen them. He likens these people to Holocaust survivors who sometimes opted to withhold their experiences from the young.

Parents who raised families in the rebuilt Greenwood neighborhood sometimes refrained from speaking of the massacre for fear that talking about the horror might cause it to recur. On the 25th anniversary, The Oklahoma Eagle — the African-American community’s flagship newspaper — published a single cryptic sentence: “In 1921, racial bitterness, which had been brooding for several years, culminated in one of the most disastrous race riots in the nation’s history.” Not surprisingly, some African-Americans grew to adulthood knowing little or nothing about the terror that had been visited upon their grandparents.

The state opened a more expansive view of the past in 1997, when it created the Oklahoma Commission to Study the Tulsa Race Riot of 1921. Soon afterward, newspaper articles requesting information on the massacre attracted responses that focused heavily on the missing dead. People spoke of bodies stacked on the streets, in the backs of trucks and on railway cars and laid to rest in far-flung pits, quarries and mines.

These grisly anecdotes showed that victims who had been shunted out of civic discourse had taken up residence in the public imagination. The stories also suggested that the physical remains of the dead had been dispersed across too vast an area to be searched by teams of archaeologists.

The team that unearthed the mass grave in Oaklawn Cemetery was spared the task of having to disentangle truth from myth. The archaeologists benefited greatly from a study of funeral home records and other documents produced as part of the 2001 riot commission report by the forensic anthropologist Clyde Snow.

Dr. Snow, who died in 2014, was widely known for his work on the remains of the Nazi war criminal Josef Mengele as well as on victims of the serial killer John Wayne Gacy and the 1995 Oklahoma City bombing. Pointing to Oaklawn Cemetery in the report, Dr. Snow advised those who would come after him to look for skeletal remains that showed exposure to fire. These remains, he said, might provide clues to the identities of others resting nearby.

The skeletons of Oaklawn could well tell a story that broadens what we know about the bloody episode that defines Tulsa’s history. Nevertheless, this dig will not resolve longstanding questions about how many died in 1921 and where they came to rest. Those mysteries will haunt Tulsa for a long time to come.