It turns out there was a coordinated attack on the 2020 election after all. It began several years ago and accelerated in the last several months. Now that Election Day has passed, it has launched into overdrive.

Its weapons are baseless insinuation and evidence-free charges, deployed solely to sow chaos and undermine the results of a free and fair election — one that produced a clear winner and an even clearer loser.

But the most dangerous attackers of American democracy aren’t the Russians or the Chinese. They are the leaders of the Republican Party.

In the face of a commanding national triumph by President-elect Joe Biden — not just an Electoral College victory but a popular-vote margin that is approaching five million — President Trump and top Republicans are behaving like spoiled children refusing to let go of their toys.

“President Trump is 100 percent within his rights to look into allegations of irregularities and weigh his legal options,” said Mitch McConnell, the Senate majority leader, even as he celebrated Republican pickups in the House of Representatives. Apparently, the same ballots that may be fraudulent at the presidential level are fine a few lines farther down, where Republicans are winning more of them. 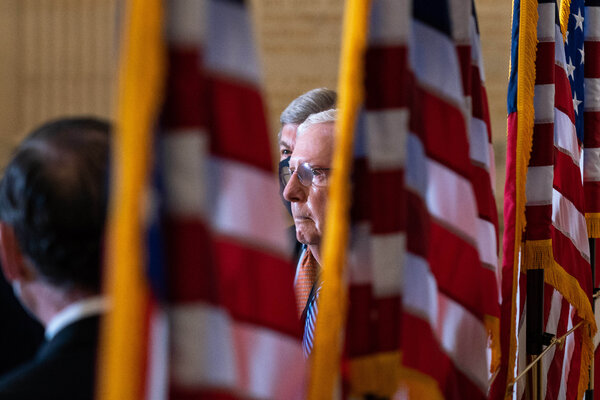 Attorney General Bill Barr, who has repeated the president’s lies that absentee ballots were a source of widespread voter fraud, authorized the Justice Department to look into “substantial allegations” of voting irregularities. In response, the department official who oversees voter-fraud investigations stepped down.

The rot pervades the administration. The Trump-appointed head of the General Services Administration, Emily W. Murphy, has yet to recognize Mr. Biden as the winner of the election and the president-elect, preventing him from accessing millions of dollars in funds, national-security tools and other essential resources to begin the long and complex task of presidential transition.

On Monday, Mr. McConnell snidely remarked, “Let’s not have any lectures about how the president should immediately, cheerfully accept preliminary election results from the same characters who just spent four years refusing to accept the validity of the last election.”

Oh, please. Hillary Clinton conceded the 2016 election less than 24 hours after polls closed, even though Mr. Trump had barely eked out wins in three decisive swing states and was trailing badly in the popular vote. So did other top Democrats, including, crucially, President Barack Obama, who called Mr. Trump before sunrise to congratulate him and to “invite him to come to the White House tomorrow to talk about making sure that there is a successful transition between our presidencies.”

This is what you do when you lose an election. Republicans still howled in outrage because Mrs. Clinton had dared to hold off conceding on election night itself.

It is now one full week after Election Day 2020. Joe Biden has prevailed in the Electoral College by a margin that, if current leads hold, will be identical to Donald Trump’s in 2016. When the counting is complete, his popular-vote margin could be twice as big as Hillary Clinton’s.

And yet with painfully few exceptions, Republicans are silent. No congratulations to Mr. Biden and his running mate, Vice President-elect Kamala Harris. No concessions. No acknowledgment that any world exists beyond their fantasy one in which only Republicans may rule. Instead we hear endless droning about “voting irregularities” or “fraud” or whatever euphemism Republicans have agreed on this year to describe Black and brown people voting in large numbers.

By the way, for a party that professes to care so much about election integrity, Republicans have an odd way of showing it. Democrats have tried to pass multiple measures enhancing election security in recent years, some with bipartisan support. Mitch McConnell keeps blocking them, or being stingy with funding.

Of course any election irregularities should be brought to light, if they exist. But what Republicans have brought forth instead is a slurry of unverified allegations and flat-out bogus claims racing around social media, and filing lawsuits that would be sanctionable under normal circumstances. Senator Lindsey Graham of South Carolina said, “Philadelphia elections are as crooked as a snake,” without offering any evidence. The new generation of Republican leaders preach and preen about how only “legal” votes should be counted, as though they have discovered some long-lost secret rather than a mundane fact about all elections.

The truth is that Republicans have conditioned themselves to refuse to accept that they could lose despite, or precisely because of, all the built-in structural advantages they currently enjoy, like the Senate and the Electoral College.

Speaking of those advantages, do you hear any Democrats saying that the Senate was “stolen,” even though their minority has consistently represented many millions more Americans than the Republicans’ majority? Instead, after a disappointing election night, they regrouped and said, we have to get out the vote and win those two runoffs in Georgia. That’s what you do in a democracy.

Sure, Democrats are mad at Mr. Trump and opposed to his presidency — not only because he lost the popular vote by so much, but because he was and remains so manifestly unfit to hold the office, as many top Republicans used to say themselves.

One of the countless measures of Mr. Trump’s unfitness is his willingness to accept or even solicit foreign interference to win. That is why, if there was any cheating in the 2020 election, it was committed by the president himself, when he tried to extort a foreign nation to gin up dirt on Mr. Biden and his son Hunter. For this high crime he was impeached by the House of Representatives. To be clear, that impeachment was not the result of Democrats’ refusal to accept his legitimacy to govern; it was a result of his decision to squander that legitimacy yet again by behaving like a strongman.

But the bigger picture here is the decade-long descent of the Republican Party which now prefers conspiracy theories over facts, magical thinking over science and delegitimizing its political opponents over substantive and responsible governance. Just a few recent examples: The racist birther slurs that Mr. Trump spearheaded against Mr. Obama; the reflexive opposition to everything Mr. Obama tried to do, even before he took office; the blanket denial of his appointment of federal judges, culminating in the theft of a Supreme Court vacancy that arose nearly a year before he left office; and finally, the seating of Mr. Trump’s Supreme Court nominee only days before an election that he lost fair and square.

Republicans have been working tirelessly to make voting harder for many years, and especially this year, for precisely this reason. They knew that Mr. Trump was unpopular and that Mr. Biden would probably win if more people voted. When voter suppression failed, they had only two options: accept their fate like serious and responsible people do, or claim that any loss they suffered was by definition the result of fraud.

Once again, they picked door number two. This is the problem with getting comfortable with the perks of minority rule, as Republicans have over the past several decades. It’s not just that you can ignore what most Americans want. It’s that you genuinely believe that there’s no way your opponent can win — much less by an absolute majority — without cheating.

That attitude is fatal to a democracy, the survival of which depends, above all, on the loser accepting the results. The Democrats, along with most of the rest of the world, understand this. One party alone is responsible for dragging the nation to this perilous place.