Bret Stephens: Well, Gail, it was another slow news week. Donald Trump and Joe Biden had a televised conversation and then the president caught some sort of cold. We’ll have to stick to boring subjects. The 25th Amendment, anyone?

Gail Collins: We obviously want to begin by expressing heartfelt wishes for the president’s recovery. One of the goals of this election is reminding the world that this is not a country that believes a politician who’s terrible at his job should suffer physically.

Bret: One hundred percent. Get well, Mr. President: We sincerely wish you good health, long life and the full use of your taste buds in order to savor electoral defeat.

Gail: Last night, as I was trying to send positive thoughts toward the presidential sickroom, America’s most famous patient got in a car and rode around waving to supporters. I’m sure it cheered him up. But once again, not a great example to give everybody else.

Of course it’s important for us all to wish him good health, but it’s impossible to ignore for one minute the fact that he spent the fall — and the debate a mere week ago — making fun of people who wear masks.

Bret: I don’t want to get all karmic about this. Even a much more cautious president could have gotten sick; it’s part of the job description of the presidency to meet with a lot of people, and all it takes is one asymptomatic carrier to cause an infection. I’m not sure we’d have wanted Trump to go the Vladimir Putin route (he’s done that enough already) by requiring anyone who meets with him to first go into a two-week quarantine.

Gail: Putin is happiest when he’s alone — and of course bare-chested — in an icy lake and Trump just wants to be surrounded by huge, hot masses of adoring fans.

Bret: Well, we can sincerely thank Trump for not treating us to Putin-style photo-ops. The big question — hoping and assuming he survives — is what it means politically. And by the way, that’s a heckuva thing to have to say in the middle there.

Gail: Even fans who somehow imagine he did well in that debate can’t be telling themselves that the president who assured them that coronavirus was no big deal will profit politically from coming down with Covid-19.

Bret: Trump has so thoroughly upended normal political expectations so often that I can’t be entirely sure. Sorry, go on …

Gail: Unless his new campaign theme is going to be “Hey, a lot of people are going to get sick but we’ll be better by Thanksgiving.”

Bret: Trump will garner a fair amount of sympathy, some of it fake but much of it sincere, and it will put the memory of his debate performance behind him. And, by the way, has there ever been a more ghastly presidential performance in American history? He seemed to be playing a caricature — Donald Trump channeling Alec Baldwin channeling Donald Trump — and yet he was wholly himself: crass and cruel, rough and rude, small and stupid. His inability to denounce white supremacist groups unequivocally was the lowest moment of the evening, but there were so many others that were nearly as bad, like mocking Hunter Biden’s substance-abuse issues.

Gail: And a reminder of how incapable Trump is of defending his own behavior. Whenever he tries to make an excuse, everything sounds worse. The Alec Baldwin version actually has been seeming more coherent. 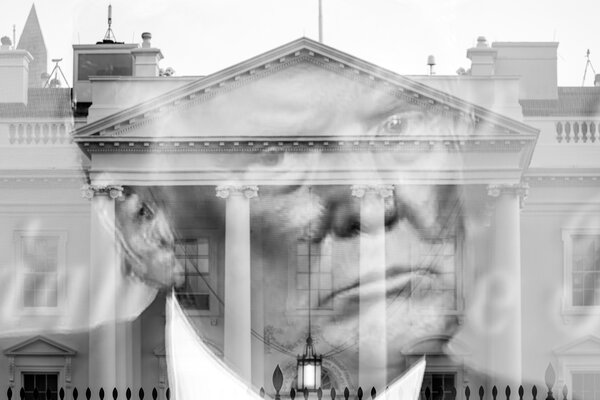 Bret: You know, there’s a great scene in “The Deer Hunter,” in which Robert DeNiro, holding a bullet, tells John Cazale, “This is this. This ain’t something else. This is this. From now on, you’re on your own.” It’s how I feel about Trump supporters: “Here’s your guy. He’s not something else. Good luck with him.”

Gail: I love the way you quote great old movies. Reminds us we have a culture that goes back beyond 2016.

Bret: With Trump, the relevant movie references have to be either really dark or really absurd. When his administration isn’t the Russian roulette scene in “The Deer Hunter,” it’s the Stonehenge scene in “This Is Spinal Tap.”

Gail: By the way, I’m so sorry there’s not going to be a regular Halloween this year. I love the costumes. In my neighborhood I’ll bet we’d have seen at least one little Ruth Bader Ginsburg wearing a halo.

Bret: If some kid knocks on my door dressed as Swearing Melania, she’ll get all the candy.

Gail: Speaking of the Supreme Court, any predictions on the Amy Coney Barrett nomination? I presume Mitch McConnell will hold a vote even if he has to wheel in his members in oxygen tents.

Bret: Since McConnell has broken all his own rules when it comes to this nomination, I assume he’s not above breaking Senate rules as well. I can picture coronavirus-positive Republican senators like Utah’s Mike Lee and North Carolina’s Thom Tillis arriving for the Judiciary Committee hearings in hazmat suits. What I’m less sure of is whether Democrats can use the quorum-call rule, which requires that at least 50 Senators have to be present for the chamber to conduct its business, to block a final vote. Those Republicans would have to be so physically incapacitated that it couldn’t happen. Then again, you probably remember the time when Pete Wilson, then a senator representing California, arrived in the chamber from a hospital bed, in bathrobe and pajamas, to vote aye on Reagan’s 1986 budget.

Gail: When Congress voted for women’s suffrage 100 years ago, one congressman, Henry Barnhart of Indiana, had himself carried in on a stretcher to vote yes. Just wanted to add a more progressive cause to the list of things that can get a politician out of a sickbed.

Sorry, back to Mitch McConnell and the Supreme Court …

Bret: I still think Barrett’s going to get a vote and get on the court. Meantime — there’s no use not asking the question — what do you think might happen if the president moves toward, um, a separate plane of existence?

Bret: OK, now I am rooting extra hard for the president to pull through this, Gail.

Gail: And then, I guarantee, there would be a party fight over who gets to be on the ballot next month.

Plus a huge, whomping crisis over how to get the ballots printed.

Bottom line is that we’d be living through an unprecedented and deeply complicated crisis in American history. Once again.

Bret: You know, Gail, as we approach this final sprint, my prevailing feeling is that I’m so sick of it. Sick of living in Donald Trump’s Clownverse, or Dramaverse, or Bullyverse, or I-Can’t-Believe-This-Guy-Is-Actually-the-President-verse. On Tuesday I watched a debate between an upright but uninspiring candidate with whose views I usually disagree, and a guy who made me want to stuff my fingers in my ears while I cringe for my country. A former colleague of ours, Rick Bragg, once wrote a heart-wrenching memoir, “All Over but the Shoutin’,” and the title really seems to fit where we are. If Biden gets elected and does nothing except lower the national decibel level, he’ll earn a spot on Mount Rushmore in my book.

Gail: Hey, I’m counting on you to turn on Biden as soon as he’s safely in office so we can go back to having those good old liberal-conservative fights we had before we were united in the appalled-by-the-president fellowship.

Here’s the plan: Trump gets better, Trump gets defeated in the most humiliating fashion possible, and Biden brings us back to normal.

Normal, of course, includes political quarreling. Can’t wait until we can start sniping at each other about nice, boring stuff like unions and taxes and the budget.