Don’t be fooled by snapshot polls. 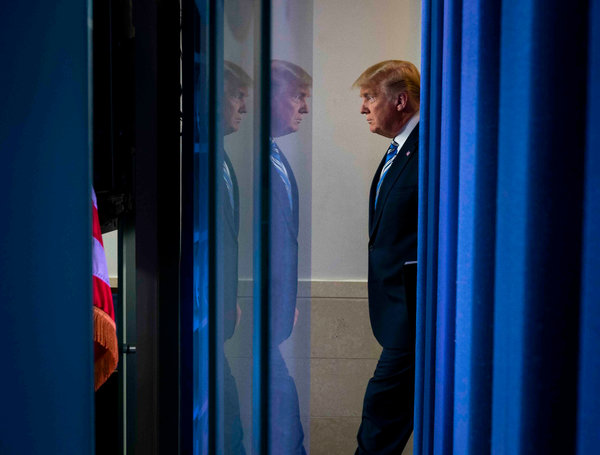 The strangest part of President Trump’s coronavirus response is that it’s almost certainly damaging his chances of re-election.

I realize that may sound surprising, given that his approval rating has been rising. But when you look beyond day-to-day events — which Trump often struggles to do — you see that he is creating the conditions for a miserable summer and fall, with extended virus outbreaks and a deeper recession. The summer and fall, of course, are the crux of the presidential campaign.

Trump’s virus strategy revolves around trying to make the present seem as good as possible, without much concern for the future. He spent almost two months denying that the virus was a serious problem and falsely claiming that the number of cases was falling. He has spent the last two weeks alternately taking aggressive measures and refusing to do so, often against the advice of public-health experts. Some Republican governors, following Trump’s lead, are also rejecting those experts’ pleas: There are beaches open in Florida, restaurants open in Georgia and Missouri and many people out and about in Oklahoma and Texas.

Altogether, the United States seems to have engaged in the least aggressive response of any affected country. Sure enough, it also now has the world’s largest number of confirmed cases. The American caseload was initially following a similar path as the Chinese and Italian caseloads. But the number of American infections is now rising uniquely fast, with 96,000 new cases in the last week — more than twice as many as in any seven-day period in any other country.

This surge doesn’t cause only more short-term deaths and overwhelmed hospitals. It also leads to more cases in later months, by creating a larger group of infected people who can spread the virus to others. As Tom Frieden, a former head of the Centers for Disease Control and Prevention, told me, “The higher the peak, the longer it lasts.”

And the longer that the country is gripped by the virus, the deeper that the economic downturn will be. Austan Goolsbee, a University of Chicago professor, refers to this as the first rule of “virus economics”: The only way to resuscitate the economy is to stop the virus. Premature attempts to restart business activity will lead to further outbreaks, which will cause more fear and new shutdowns.

A bipartisan group of business executives, government officials and others, including former Federal Reserve chairs Ben Bernanke and Janet Yellen and four former Treasury secretaries, put it this way: “Saving lives and saving the economy are not in conflict right now; we will hasten the return to robust economic activity by taking steps to stem the spread of the virus and save lives.”

This idea isn’t just theoretical. There is now evidence, from places that have enacted a temporary shutdown of almost all non-essential activity. That’s how Wuhan, where the virus began, reduced new cases to nearly zero. It’s how the New York suburb of New Rochelle seems to have contained its outbreak.

Counterintuitively, these shutdowns also help the economy. A fascinating new study, from researchers at the Fed and M.I.T., has analyzed the social-distancing policies that various American cities enacted during the 1918 flu pandemic. Some cities, like Los Angeles, Seattle, Minneapolis and Cleveland, closed schools and banned public gatherings earlier and for longer periods. Others, like San Francisco, Philadelphia and St. Paul, Minn., were less aggressive.

The first group of cities suffered fewer deaths — and also enjoyed higher average employment and manufacturing output, as well as stronger bank balance sheets, in the following year. The title of the paper — by Sergio Correia, Stephan Luck and Emil Verner — says it all: “Pandemics Depress the Economy, Public Health Interventions Do Not.”

The economic costs are still severe. Today, the most effective response would probably be a two-month national shutdown, accompanied by a modestly larger stimulus bill than Congress just passed, both to pay many Americans’ salaries and to bolster the health care system. When the two months were over, healthy people could go back to work, and any new cases could be quickly isolated. That second phase would be similar to the strategy in Singapore and Taiwan.

Had Trump taken this approach in late February, a full month after the first American fell ill, he could have vastly reduced the human and economic toll. Even if he took it now, he could probably get the country functioning close to normally by early summer. Instead, he is talking about normalcy by April — and making it likely that things will still be abnormal in July.

What explains his response? Trump lives in the moment. He is impetuous. He is like a day trader, not a long-term investor. A shutdown sounds miserable to him. He doesn’t have much respect for scientists and their data, but he does pay close attention to his poll numbers. And they’re rising (along with, it’s worth noting, the approval rating of other world leaders). Trump’s approach seems to be working, for now.

I can’t tell you exactly what the future will bring, especially during a crisis unlike any the world has confronted in a century. It’s possible that Trump could somehow luck out and the virus will end up being less gruesome for all of us. But that’s not the likely outcome. And nobody should forget that he is choosing a path that endangers lives and jobs mostly because it feels better to him in the moment.

Listen to “The Argument” podcast every Thursday morning, with Ross Douthat, Michelle Goldberg and David Leonhardt.