That’s what former President Donald Trump told Georgia’s top elections official long after he had clearly lost re-election. Mr. Trump’s effort to overturn the 2020 U.S. election failed. But his tactics, as Anne Applebaum recently observed in The Atlantic, have inspired anti-democratic politicians around the world. Nowhere is that more clear than in Peru.

Ms. Fujimori framed her campaign as a fight against communism, telling voters that Mr. Castillo would convert Peru into another Venezuela — a strategy that won over many middle-class voters in Lima and other coastal cities. Meanwhile, Mr. Castillo appealed to poor voters in rural areas who felt ignored by the Lima-centered political elite and were deeply dissatisfied with the status quo.

With 100 percent of votes counted, Mr. Castillo won by a razor-thin margin of about 44,000 votes out of nearly 19 million. But Ms. Fujimori has refused to accept defeat, baselessly claiming the election was fraudulent. Peru’s electoral authorities have found no evidence of fraud, and there is no reason to doubt their independence. International observers and election experts have also concluded that the election was clean. Nevertheless, the Fujimori camp has begun what amounts to an electoral coup attempt, pushing Peru’s democracy to the brink of collapse.

Rather than find votes for herself, like Mr. Trump sought to do, Ms. Fujimori is trying to make her opponent’s votes disappear. A team of lawyers sent to hunt for irregularities in Mr. Castillo’s rural strongholds uncovered 802 election records each containing 200 to 300 votes, which they sought to have annulled based on minor technical irregularities. In total, Ms. Fujimori seeks to wipe out more than 200,000 of her rival’s votes in his strongholds based on dubious criteria not applied elsewhere in the country.

The claims are preposterous. If there were systemic fraud, it would have been uncovered on Election Day. It would have required organization and coordination, of which no evidence has been found. Peruvian polling places are patrolled by electoral and law enforcement officials, international observers and, crucially, thousands of citizens and partisan representatives who would have circulated evidence of any fraud on social media.

This hasn’t deterred Ms. Fujimori. Baseless claims of fraud have flooded social media and are ceaselessly repeated on television channels, which are overwhelmingly in her favor. Fujimori supporters are even harassing electoral authorities by organizing demonstrations outside their offices. Many are calling for the entire election to be annulled.

The strategy is clear: Ms. Fujimori has initiated a Trump-like disinformation campaign aimed at delegitimizing the election and creating an atmosphere of fear and uncertainty. In an increasingly polarized climate, these tactics could lead to violence and even military intervention.

Talk of a coup is not mere speculation. Last Thursday, hundreds of retired military officers sent a letter to leaders of Peru’s armed forces declaring without evidence the election fraudulent and demanding that the military not recognize Mr. Castillo as president.

Overturning the election would be a colossal mistake. If the candidate representing long-marginalized voters is illegitimately denied victory, it could set off widespread social protest, creating a governability crisis like those in neighboring Chile and Colombia. Under such circumstances, the only way Ms. Fujimori — or anyone else — could govern would be through repression.

Why is this happening? Ms. Fujimori’s campaign is backed by nearly the entire Lima establishment, including business leaders and major media outlets, as well as much of the middle class. These groups fear that Mr. Castillo will take Peru down a path toward Venezuela. But they also fear Mr. Castillo because he is not one of them. In a country marked by vast social, racial and regional inequality, Mr. Castillo is an outsider whose ascent, for many privileged Peruvians, feels threatening.

Some of the elite’s fears are understandable. During the 1980s, failed statist economic policies and a brutal Maoist insurgency plunged Peru into hyperinflation and terrible violence. Some of Mr. Castillo’s allies are indeed radical leftists, and his original economic program was improvised and outlandish. 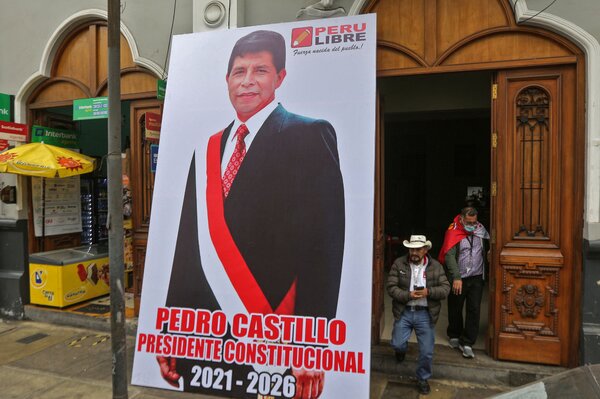 But these fears are also exaggerated. Mr. Castillo is hardly a strongman. He lacks experience or a solid party base, and he is nowhere near as popular as Venezuela’s Hugo Chávez, Bolivia’s Evo Morales or other populists-turned-autocrats. His party holds only 37 of 130 seats in the new Congress, a majority of which are filled by right-of-center politicians. Mr. Castillo has few allies in the judiciary or the military, and he is opposed by a powerful business elite and much of the media. In the face of such opposition, a radical strategy would almost certainly fail.

It is time to stop the insanity. Rather than sacrifice democracy on the altar of anti-leftism, Peru’s elites should use democratic politics to moderate or block Mr. Castillo’s more extreme proposals. Given Mr. Castillo’s weakness, it should not be difficult.

For his part, Mr. Castillo must recognize that he was elected not because of his radical ideas but despite them. Peruvians considered him the lesser of two evils. To govern, he must build bridges to center-left and even centrist forces. If he does not, his presidency — and Peru’s democracy — will be imperiled.

The Biden administration knows the danger of efforts to overturn a legitimate election result. For this reason, it recently praised the election as a “model for democracy in the region.” The international community should not remain silent in the face of Peru’s slow-moving coup. The world’s beleaguered democracies need our support.

Steven Levitsky is a professor of government at Harvard and co-author of “How Democracies Die.” Alberto Vergara is a professor at Universidad del Pacífico, in Lima, Peru, and co-editor of “Politics After Violence: Legacies of the Shining Path Conflict in Peru.”