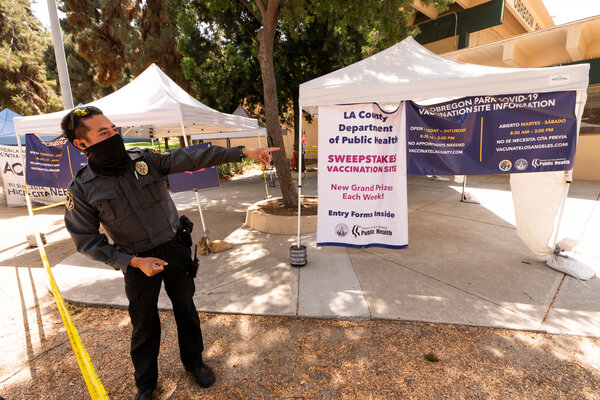 Re “Vaccinated Aim Anger at Those Who’ve Said No” and “2 Key Regions Give Workers Choice: Vaccines or Tests” (front page, July 27):

Yes, I’m angry. Thanks to Republican elected officials and conservative media spreading not just misinformation but outright lies, the Covid-19 pandemic has rebounded instead of vanished. The economic costs are in the billions, the human costs incalculable and the societal costs vast. Meanwhile, the virus has the opportunity to mutate to something even more contagious and more lethal.

It’s long past time for vaccine mandates, at work, for access to public places and for schoolchildren age 12 and older to return to their classrooms. Elected officials must do their jobs and mandate vaccines — as Gov. Gavin Newsom in California and Mayor Bill de Blasio in New York City have — before it’s too late.

To the vaccine resisters, I say, “Love it or leave it.” If you don’t like being protected by your government, go to countries where people aren’t getting vaccinated because they don’t have vaccine to administer.

Daniel Fink
Beverly Hills, Calif.
The writer is an internist.

Unions came into being in order to protect the work force; how perverse it is that not only are many unions not voicing support for requiring employees to be vaccinated, but they are actually opposing Covid vaccine mandates. If the purpose of unions now is to effectuate rather than prevent harms, something is very wrong.

Republicans nationwide face a dilemma; they must reverse their tacit approval of misinformation and conspiracy around vaccines in order to save the voters who keep them in power. That risks alienating their most ardent supporters.

Some are trying to thread the needle by admitting they have taken the vaccine while still defending the “individual rights” to refuse and deflecting political responsibility onto the controversy surrounding the origin of the virus. Shame on them for being responsible for continuing deaths.

Vaccines save lives and prevent transmission and introduction of variants. But vaccines cannot save us from ourselves if we refuse to acknowledge facts. The F.D.A. should grant full approval for the Covid vaccines, and they should be required for attendance at schools, religious gatherings, sports and entertainment events, travel and even employment.