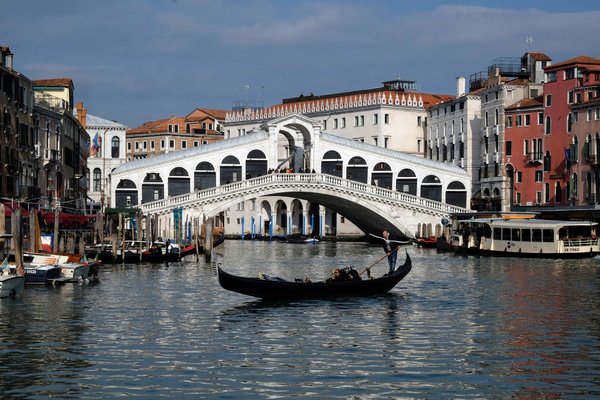 Ruth Bader Ginsburg and I shared a gondola in Venice during the 500th anniversary of the Ghetto in 2016. I was filming the “Merchant of Venice” segment of the PBS “Shakespeare Uncovered” series, and when her boat broke down, I invited her to share mine.

She stood no higher than my shoulder, which startled me, and even now in my memory, our first meeting is one of surprise, because her quiet, assured stillness projected something much bigger and stopped me cold. I imagine it affected everyone the same way; it was calming. Her bodyguard was just about twice her size, and my sense of him was that he was so proud to be her protector.

She and I sat next to each other in the ride to her hotel, and I invited her to act with me in the trial scene from “The Merchant of Venice”; I’d been scheduled to appear in a mock-trial appeal of Shylock’s verdict. She instantly agreed, and it’s on tape somewhere.

After we did the Shakespeare scene, there was an imaginary argument of Shylock’s appeal between real-life international lawyers and scholars, with Ruth as chief justice. They then retired to chambers for half an hour, and when they returned, Chief Justice Ginsburg found for Shylock on several grounds, one of which was that counsel for the defense, Portia, did not have a license to practice law, but also that Shylock, if he had known of the deadly consequences of his actions, would have never insisted on the pound of flesh.

Further, if he had been aware and still insisted, then he was obviously mentally incompetent, therefore not responsible for his actions.

The simplicity, the logic, the clarity of her decision revealed the woman herself, her grace, her intellect and, most of all, her humanity. And now, of our great loss.

It’s All About Those Blue States

So apparently our president thinks that the coronavirus death toll is not so bad “if you take the blue states out.”

This leads me to conclude that I now know for sure who is going to win the coming election: Trump!

If you take the blue states out.