Scarcely had the violence ebbed on Capitol Hill on Jan. 6 when the Republican calls for healing began. Representative Debbie Lesko of Arizona made an anti-impeachment cease-and-desist plea on Jan. 12 that was typical of many. Addressing Democrats, she warned that impeachment would “further divide our country, further the unrest and possibly incite more violence.” Senator Lindsey Graham of South Carolina concurred, declaring on Fox News that calls for impeachment would “incite more violence” and “divide the country.”

Although couched in calls for unity, these warnings are remarkably one-sided. There is no talk of reconciliation or compromise. No acceptance of responsibility. Lots of blame casting. And little willingness to calm and inform their base. Even now, some Republicans refuse to admit that Joe Biden won the election, and the Senate vote on an impeachment trial on Jan. 26 suggests that most Republicans want no investigation and will place no blame. They want reconciliation without apologies, concessions without sacrifice, power without accountability.

And many of them are using threats of violence to encourage Democrats and the disloyal to fall in line. If you impeach the president there will be violence, they charge. Masked in democratic platitudes like “unity” and “healing,” the inherent menace in such pleas is utterly deniable. But they are threats nonetheless.

Not all Republican threats have been subtle. Consider the words of the newly elected Representative Madison Cawthorn of North Carolina at a Turning Point USA event on Dec. 21. “Call your congressman,” he told attendees, “and feel free — you can lightly threaten them and say, you know what, if you don’t start supporting election integrity, I’m coming after you. Madison Cawthorn is coming after you. Everybody’s coming after you.” Cawthorn later denounced the violence at the Capitol. But his call for “light” threats was part of the roiling rhetoric that paved the way to Jan. 6.

Threats have power in a democratic politics of give and take. They’re intended to intimidate people into silence or compliance. If they’re believable — and only if they’re believable — they shape outcomes, strengthened by the weight of possibility. In the last four years, we’ve seen the former president’s ample servings of public humiliation silence or sideline people time and again. Never has the bully pulpit been so bullying. 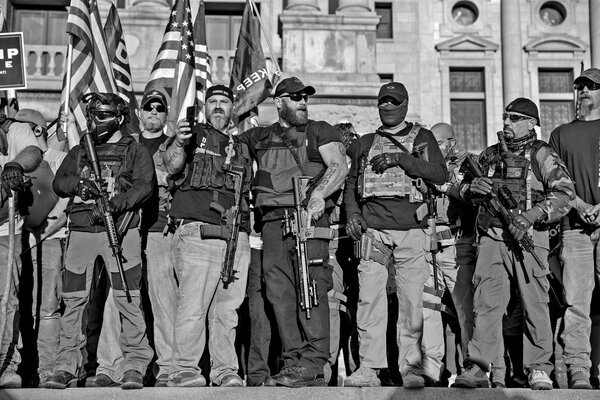 The impact of such threats was apparent in the House vote on impeachment. “I had a lot of conversations with my Republican colleagues last night,” reported Representative Jason Crow, Democrat of Colorado, on MSNBC on Jan. 13, and a “couple of them actually broke down in tears … saying that they are afraid for their lives if they vote for this impeachment.”

This is bullying as politics, the modus operandi of our departed chief. Hardly a Trumpian innovation, its heyday was in the decades before the Civil War. During the 1840s and 1850s, America was divided over the fate of slavery. Political parties were splintering under the strain. National institutions were struggling — and failing — to contain it. The press sensationalized the struggle to serve a cause and sell papers. And a new technology spread journalistic hot-takes throughout the nation with greater reach and speed than ever before. The telegraph was the social media of its day, and it came into use in the late 1840s as the slavery crisis was rising toward its peak.

Congressional bullying was useful in those fraught decades, and its practitioners plied their trade proudly; most of them were Southerners, who tended to be armed and ready to fight. Every Congress had its “bullies” who protected slavery with threats and violence, and more often than not, their constituents liked them that way. Some such bullies wore guns and knives in plain view as a warning to game the give-and-take on the floor. Such was the message of weapons in Congress; they were steel-powered attempts to maintain Southern dominance.

Southerners had long dominated the national government, and they felt entitled to that power. They were also worried about losing it, a product of the rise of abolitionism and potentially free states forming in the West. Viewing their violence as defensive and justifiable, they fended off attacks on slavery with force when necessary, demanding compliance or silence from their foes, and sometimes getting it. Men resigned from committees in the face of Southern threats. During debate, some men held back rather than confront fighting men.

For some Southerners, this brand of politics wasn’t much of a stretch; their slave regime was grounded in violence, and mastery was their way of life. Between 1830 and 1860, there were at least 70 violent incidents on the House and Senate floors, most of them prompted by Southerners.

This Southern strategy of force was no happenstance, no mere matter of custom. Representative Richard Kidder Meade, Democrat of Virginia, declared as much in 1849 on the House floor, bragging that the best way to manage antislavery congressmen was to keep them afraid for their lives. And it worked. Joshua Giddings, a freshman Whig representative from Ohio, was stunned at the sight of it. During his first weeks in Congress in 1838, he saw that Northerners were too “backward and delicate” to confront Southern insolence. “We have no Northern man who dares boldly and fearlessly declare his abhorrence of slavery.”

Not surprisingly, as the slavery debate intensified in the 1850s, so did Southern threats. Representative Thomas Clingman, a Whig from North Carolina, reached new heights during the debate over what came to be known as the Compromise of 1850. If Southern interests weren’t protected, he warned on Jan. 22, Southerners would fight. Their plan of attack was simple, he explained. If fighting with parliamentary gamesmanship like “Northern gentlemen” didn’t get them what they wanted, then they would fight like Southern men — with force. The end result would be a “collision” as electric as the Battle of Lexington, followed by the collapse of Congress.

A few weeks later, Senator Henry Foote, Democrat of Mississippi, made the same threat more subtly, Senate-style. If a South-friendly compromise wasn’t hammered out in the next three days, he declared, the matter would “leave our jurisdiction, and leave it forever.” What did he mean? Newspapers filled the gap. He was threatening armed warfare in Congress.

Would Southerners have opened fire in Congress? Probably not. But could they have? Their track record suggested that they could have, so their threat carried. Concerned congressmen considered outcomes. How many representatives were armed, some wondered. Representative Willie Mangum, another Whig from North Carolina, thought 70 or 80; his fellow North Carolina Whig and friend David Outlaw thought fewer. These men were envisioning warfare in the House, however unlikely it might be.

Some people, however, thought it quite likely, and gathered at the Capitol to witness it. Outlaw reported to his wife that “great crowds” had assembled “to see the Union dissolved by a general battle in the House of Reps.” Only when the chance of a congressional doomsday had passed did they drift away.

The threat of outside attacks on Congress also loomed large. During the charged slavery debate in 1850, Outlaw worried about armed and angry citizens rushing into the House. “In times of great excitement, as upon the slavery question, armed men might be admitted into this hall,” and “in less than three minutes three hundred strangers” could bring “bloodshed and confusion” in their wake.

Mass violence in Congress seemed possible in 1850. Now, 171 years later, it’s in the national mindscape once again. And for good reason. The echoes of 1850 are striking. We’re at a moment of extreme polarization when outcomes matter, sometimes profoundly. The Republicans, whose ironclad grip on the Senate has dominated the federal government, feel entitled to that power and increasingly threatened; they know they’re swimming against the demographic tide in a diversifying nation. They have proven themselves ready and eager for minority rule; voter suppression — centered on people of color — is on the rise, and has been for some time. And some of them are willing to protect what they deem right with threats of violence.

This is the logic of bullying. It’s democracy by force — which, of course, isn’t democracy at all. It’s a demand for one-party rule.

This isn’t to say that democracy requires absolute unity. Quite the opposite; in a sense, conflict is its core. A truly democratic government enables people of all kinds to express their views and serve their interests through protest and the democratic process, itself grounded on debate and compromise, arguments, electoral and legislative contests, and competition — though not the rule of force.

For this precise reason, democratic governance requires clear lines in the sand beyond which dissension cannot go. The Trump supporters who mobbed the Capitol seeking to assault lawmakers and overturn an election crossed that line. They physically attacked American democracy — its processes, its officeholders, its structural home — with some Republican power-holders egging them on. The support of some congressional Republicans — and their consequent refusal to take the attack seriously — has made matters worse, making members feel unsafe around each other. “It’s the most poisonous I’ve ever seen,” Representative Don Beyer, Democrat of Virginia, said in an interview — one of many reasons a formal investigation into the uprising is essential to clear the air.

And so we’ve reached a crisis over consequences. If the people who encouraged, enabled, staged, carried out and praised the attack on our government are not held accountable, we’re signaling that we’ll accept more of the same, and in so doing, we’ll be ushering ourselves into a no-holds-barred mode of politics where might makes right.

For that reason and more, the government needs to take a stand. It needs to assert the power of democratic institutions and the rule of law with a comprehensive investigation into the attack and punishment of its enablers, not in a spirit of revenge, but justly, fairly and consistently. It’s stunning that it needs to be said, but it must be: People who stage, support, or incite violent attacks on the federal government — whether they’re American citizens, members of Congress or the president himself — should be held accountable, not only to restore order in the present, but to fend off similar attacks in the future. Uniting the nation requires no less.

Joanne B. Freeman (@jbf1755), a professor of history and American studies at Yale, is the author of “The Field of Blood: Violence in Congress and the Road to Civil War.”