Many Democrats are feeling bereft about Senator Joe Manchin’s opposition to a major voting rights bill and his continuing support for the filibuster. And they are correct that Manchin’s positions will constrain President Biden’s agenda.

But Manchin has also clarified the paths that are open to Democrats. The party can now let go of its dreams of sweeping legislative change achieved through repeated 51-vote Senate majorities and instead focus on the realistic options.

The issues that tend to unite the Democratic Party are economic issues, and Manchin is a good case study. When he breaks with his party, it is typically on issues other than economic policy.

He effectively killed the voting rights bill this week, and he voted for Brett Kavanaugh’s Supreme Court confirmation in 2018. Manchin is also well to the right of most congressional Democrats on abortion and gun policy.

Yet he has often stuck with his party on taxes, health insurance, labor unions and other pocketbook issues. Like every other Democrat in the Senate, Manchin voted against both Donald Trump’s attempts to repeal Obamacare and the 2017 Trump tax cut that was skewed heavily toward the rich. Earlier this year, Manchin voted for Biden’s $1.9 trillion virus rescue bill. Without his vote, that bill would not be law.

On all these issues — economic and otherwise — Manchin’s votes tend to reflect the majority opinion of his constituents. West Virginia is a working-class state, and American working-class voters tend to be culturally conservative and economically progressive. Polls show that most favor abortion restrictions, tight border security and well-funded police departments — as well as expanded Medicare and pre-K, a higher minimum wage, federal spending to create jobs and tax increases on the rich.

“Manchin is a pocketbook Democrat, not a social warrior,” Carl Hulse, The Times’s chief Washington correspondent, told me.

This pattern suggests that Manchin may be willing to support versions of the next two major items on Biden’s agenda: an infrastructure bill and an “American Families Plan” to expand child care, education and other areas.

Manchin’s support is certainly not guaranteed, partly because he does not like to look partisan. And congressional Republicans seem likely to oppose Biden’s upcoming bills, much as they opposed the virus rescue bill and legislation from both Barack Obama and Bill Clinton. The default position of today’s Republican Party, with rare exceptions, is unanimous opposition to any bill that a Democratic president proposes.

But Manchin has been willing to provide the deciding vote on economic policy before, even along partisan lines. When he does, he sometimes demands high-profile concessions that burnish his image as a bipartisan figure who’s to the right of most Democrats — but that alter the bill in only modest ways, as my colleague Jonathan Martin has noted.

If Manchin had provided the deciding vote for the voting rights bill, it arguably would have been unlike any other vote he had cast in his career. The same would not be true of a vote for the infrastructure bill or the families plan. 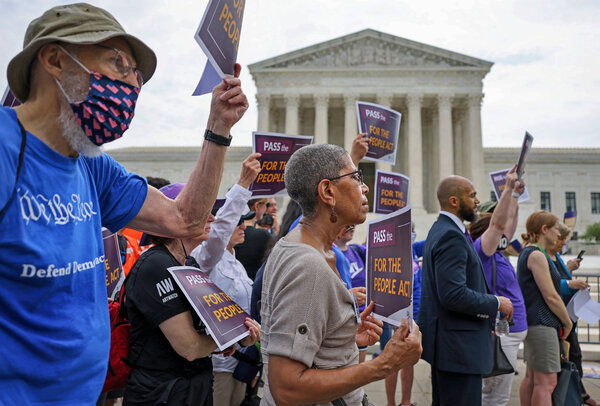 What about the longer term for the Democratic Party? Some Democrats are worried that the lack of a voting rights bill will doom the party to election losses starting in 2022. But that seems like an overstatement.

The voting restrictions being passed by Republican state legislators are worrisomely antidemocratic and partisan in their intent, many election experts say. And they may give Republicans an unfair advantage in very close elections. But it seems likely they will have only a modest impact, as Nate Cohn, who analyzes elections for The Times, has explained. Democrats can still win elections.

Manchin happens to be a useful guide on that topic, too. He has kept winning even as West Virginia has become deeply Republican, by appealing to the state’s culturally conservative, economically progressive majority. To varying degrees, some other Democrats from red or purple states, like Senators Sherrod Brown of Ohio and Kyrsten Sinema of Arizona, offer similar lessons. So did Obama, who fared better with working-class voters than many other Democrats.

This approach is the only evident way for Democrats to stem their losses in recent years among working-class voters — and not only among the white working class. A recent analysis of the 2020 election by three Democratic groups argued that the party lost Black, Latino and Asian American support because it did not have a sharp enough economic message. A recent poll by a Republican group found that most Latinos supported both tight border security and “traditional values centered on faith, family and freedom.”

As Jason Riley, a Wall Street Journal columnist, wrote this week, “As more college-educated whites have joined the Democratic Party, it has lurched further left, causing discomfort among the more moderate Black, Hispanic, Asian and working-class white Democrats who outnumber them.”

One striking aspect of the voting rights debate is how close Democrats came to passing a bill. With only one or two more senators from purple or red states, the party might well be able to defang the filibuster and pass ambitious legislation on a range of issues.

The Democrats’ problem isn’t so much Joe Manchin as it is the dearth of other senators who are as good at winning tough elections as he is.

The White House plans to send 500 million Pfizer shots to about 100 countries over the next year.

Eight of the 10 least-vaccinated states are in the South, a reflection of vaccine hesitancy and poor access to health care.

Who’s dying of Covid in the U.S.? These charts offer a portrait.

The Baseball Hall of Fame will hold an outdoor ceremony with fans to induct Derek Jeter and three others in September.

Virus resources: U.S. employers can require vaccinations. Here’s the latest on the rules.

The Biden Administration will restore environmental protections for streams, marshes and other bodies of water.

Russia designated Aleksei Navalny’s political group as extremist, a warning to Biden before his meeting with Vladimir Putin next week.

The police had been planning to clear Lafayette Square before Trump posed for photos while holding a Bible there last year, according to a report.

The company behind the Keystone XL oil pipeline — long opposed by environmentalists — canceled the project.

The F.B.I.’s recovery of Bitcoins from the Colonial Pipeline ransomware attack has upended the theory that the cryptocurrency is ideal for criminals.

A major meat processor paid $11 million ransom in Bitcoin to the hackers who forced it to close its beef plants last week.

Researchers in Tulsa, Okla., found evidence of at least 27 coffins that may contain victims of the racist 1921 massacre there.

Sweaty summer: Are natural deodorants better for you?

The protector: After surviving abuse, he made a career of finding justice for others.

A Times classic: Are you secretly a millennial?

Lives Lived: Stuart Silver helped reinvigorate the Met in the 1960s and ’70s, turning exhibitions into crowd-pleasing spectacles that became models for other museums. He died at 84.

For nearly three decades, the Tenement Museum has explored New York’s history of immigration through tours of meticulously recreated apartments on the Lower East Side.

These spaces have long told the stories of German, Irish, Italian and Jewish immigrants, and a few years ago expanded to include Chinese and Puerto Rican families. Now, as the museum reopens after being closed during the pandemic, it is finally addressing an omission in its accounts of the neighborhood’s history by working on an exhibit about a Black family, along with a walking tour that covers nearly 400 years of local African-American history.

“The museum has always looked at the question of how people become American,” Lauren O’Brien, a lead researcher on the projects, told The Times. “But what does it mean to be born an American, but not seen as an American?”

Though the new apartment won’t open until 2022, visitors can see a preview of the exhibit starting next month. The museum is also updating all its current tours to account for how race shaped the opportunities available for predominantly white immigrants. Read more about the history.

The Tribeca Festival is back. Here’s your guide to this year’s movie lineup.

A new Amazon service will automatically share millions of people’s home internet with strangers. It’s not as creepy as it sounds, Wirecutter says.

The hosts talked about Biden’s trip to Europe.

The pangram from yesterday’s Spelling Bee was effacing. Here is today’s puzzle — or you can play online.

P.S. Stella Bugbee, previously of New York Magazine, will be the new editor of The Times’s Styles section.

“The Daily” is about the mRNA vaccine. On “Sway,” the E.U.’s Margrethe Vestager talks about battling Big Tech.