Good morning. It’s another record day for virus cases. Obama’s memoir gets a glowing review. And we look at why the polls were wrong. 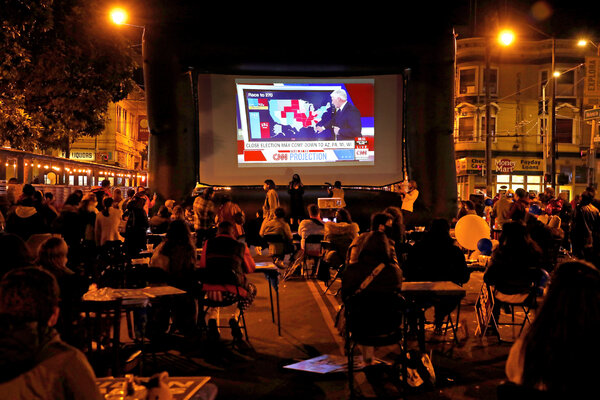 The polls were wrong again, and much of America wants to know why.

Dozens of pre-election polls suggested that Joe Biden would beat President Trump by a wide margin, but the race instead came down to one or two percentage points in a handful of states. Polls also indicated that Democrats would do much better than they did in congressional races.

So what happened? Here are six key points:

1. In the last few years, Republican voters seem to have become less willing to respond to polls. Maybe that shouldn’t be surprising, given Trump’s attacks on the media, science and other institutions.

2. This phenomenon isn’t simply about working-class whites. Pollsters were careful to include more of these voters in their samples than four years ago, when the polls also missed, but it didn’t solve the problem. One likely reason: Even within demographic groups — say, independent, older, middle-income white women — people who responded to polls this year leaned more Democratic than people who did not.

3. It’s also not just about Trump. Polls missed in several Senate races even more than in the presidential race, which means they did an especially poor job of finding people who voted for Biden at the top and a Republican lower down the ballot.

4. Most of the easy solutions are probably not real solutions. Since Election Day, some campaign operatives have claimed their private polls were more accurate than the public polls. That seems more false than true. Biden, Trump and both parties campaigned as if their own polls matched the public polls, focusing on some states that were not really competitive and abandoning others that were close.

5. Polls have still been more accurate over the last four years than they were for most of the 20th century. As pollsters get more information about this year’s election and what went wrong, they will try to fix the problems, much as they did in the past. A new challenge: In the smartphone age, poll response rates are far lower than they used to be.

6. We journalists can do a better job of conveying the uncertainty in polls. Polls will never be perfect. Capturing the opinions of a large, diverse country is too difficult. And in today’s closely divided U.S., small polling errors can make underdogs look like favorites and vice versa. All of us — journalists, campaign strategists and the many Americans who have become obsessed with politics — shouldn’t forget this. We just got another reminder.

For more: I’ve written a longer Times story about this year’s polling errors and the history of the industry.

And my colleague Nate Cohn, who knows more about this subject than almost anybody, points out that a significant chunk of the error involved Hispanic voters. Nate has also discussed polling on episodes of “The Daily” and “The Argument” podcasts.

Elsewhere: Sarah Isgur of The Dispatch says the problem isn’t about Trump voters who lie about their preference. Charles Franklin of Marquette University suggests the pandemic may have affected turnout in surprising ways. Kristen Soltis Anderson, a Republican pollster, notes that polls in many states will still be “incredibly close” to the final result.

More Republicans and their allies have begun acknowledging Biden’s victory, including Gov. Mike DeWine of Ohio, the veteran party operative Karl Rove and the editorial board of The Las Vegas Review-Journal, a newspaper owned by the family of the Republican megadonor Sheldon Adelson.

Trump privately pressed advisers about the possibility of Republican state legislatures appointing electors to vote for him in the Electoral College, bypassing voters’ wishes. But it was not a detailed conversation. “He knows it’s over,” one adviser said.

Federal, state and local election officials said the election “was the most secure in American history” and that there was “no evidence” of any compromised voting systems.

China congratulated Biden after days of silence, signaling a start to its relations with the incoming administration.

Biden’s team is concerned that the lack of a transition will hinder its virus response. Biden’s advisers say they do not have access to the details of Operation Warp Speed, the White House project to create and distribute a vaccine.

Reviews of Barack Obama’s forthcoming presidential memoir have started to come out. The novelist Chimamanda Ngozi Adichie, writing in The Times, says the book is “nearly always pleasurable to read.”

In one section, Obama addresses his presidency’s role in Trump’s rise to power: “It was as if my very presence in the White House had triggered a deep-seated panic,” he writes. “For millions of Americans spooked by a Black man in the White House, he promised an elixir for their racial anxiety.” (CNN has published several passages.)

This is the first of two volumes, and it starts early in Obama’s life, charting his initial political campaigns, and ends with a meeting where he is introduced to the SEAL team involved in the raid that killed Osama bin Laden.

Among the details: Despite his attempts to quit smoking, the stress of the job led Obama to smoke 10 cigarettes on some days. And he first thought the “Yes We Can” slogan was too corny for his campaign, until his wife, Michelle, changed his mind.

Measles deaths spiked worldwide in 2019 to the highest level in decades. Vaccination rates have stagnated in recent years, partly because of unfounded skepticism about their safety.

American jets in Alaska have scrambled to intercept 14 Russian aircraft so far this year, in response to an escalation of Russian military aggression in the North Pacific.

At least 74 people died after a rubber raft carrying migrants capsized off the coast of Libya. At least 900 people have drowned in the Mediterranean Sea while trying to reach Europe this year.

The Canadian pop star The Weeknd will perform at next year’s Super Bowl halftime show, the N.F.L. said.

Modern Love: A man finds himself caught up in a global romance scam.

The planet’s future: Climate change will be central to Biden’s presidency. Here’s what he plans to do about it.

Lives Lived: Lucille Bridges braved abuse from white protesters as she and her 6-year-old daughter, Ruby, walked to an all-white school in New Orleans in 1960, crossing one of the segregated South’s most rigidly defended color lines. Bridges died at 86.

Subscribers make our reporting possible, so we can help you make sense of the moment. If you’re not a subscriber, please consider becoming one today.

These are difficult times for live theater. The pandemic has shut down Broadway and many local theaters since March, leaving actors, stagehands and others out of work and fans missing the shows. But there is one way that theater is managing to thrive right now: Broadway has become a bigger source of televised entertainment.

An incomplete list of recent and upcoming releases includes “The Prom,” “The Boys in the Band,” “Ma Rainey’s Black Bottom,” “West Side Story” and “Wicked.” The film version of “Hamilton” was so popular that it contributed to a bump in sign-ups for Disney Plus, The Verge reports. And in a Broadway first, a musical focused on the life of Diana, Princess of Wales is set to debut on Netflix before the stage production opens.

Why is this happening now? One reason is streaming services’ “insatiable desire for content, even niche content,” Alexis Soloski writes in The Times. There’s also more mingling across theater, film and television than in the past. The playwright Jeremy O. Harris, who wrote “Slave Play,” signed a deal with HBO this year; Phoebe Waller-Bridge, who originally wrote and performed “Fleabag” as a one-woman play, signed one with Amazon.

Some critics worry that film versions will cannibalize live ticket sales. But no film can entirely reproduce the experience of a live show. Just look at social media’s horrified reaction to last year’s movie version of “Cats.”

The Times recommends: “What the Constitution Means to Me,” Heidi Schreck’s affecting play about the document’s impact on our daily lives.

End the week with something snappy and bright. This lemon-garlic kale salad is delightfully simple.

The late-night hosts had a lot to stay about Trump’s refusal to concede.

The pangram from yesterday’s Spelling Bee was wildcat. Today’s puzzle is above — or you can play online if you have a Games subscription.

P.S. Maggie Haberman, who has covered the Trump administration for The Times, is writing a book about his presidency.

Today’s episode of “The Daily” is about Trump’s refusal to concede. On a special episode of “Still Processing,” the difference between election dreams and fantasies.

Lalena Fisher, Claire Moses, Ian Prasad Philbrick and Sanam Yar contributed to The Morning. You can reach the team at [email protected].