Public discussion of “herd immunity” often treats it like an on-off switch: When the U.S. reaches herd immunity, the crisis will be over; until then, the country has little immunity from Covid-19.

But that’s not right.

Herd immunity is more like a light dimmer. The more people develop immunity — either from having been infected or from being vaccinated — the less easily the virus will spread.

Nearly 30 percent of Americans have now had the virus, according to Youyang Gu, a data scientist. (That includes many people who have never taken a Covid test.) About 18 percent have received at least one vaccine shot. There is some overlap between these two groups, which means that about 40 percent of Americans now have some protection from Covid.

Had these people been exposed to the virus a year ago, they could have become infected — and then spread Covid to others. Today, many are protected.

“This level of population immunity slows down transmission,” Caitlin Rivers, an epidemiologist at Johns Hopkins University, wrote in The Washington Post. “After millions of infections and the start of a vaccination campaign, the virus is finally, slowly, starting to run out of new people to infect.”

The pandemic is still a long way from over. And the situation may worsen again, because of a combination of risky behavior and new virus variants. Experts are particularly worried about some states’ rush to lift mask mandates and restrictions on indoor gatherings. For now, however, the virus trends are improving, thanks largely to the rising level of immunity.

When I last gave you an overview of the U.S. situation — two weeks ago — I highlighted a mix of positive trends (declining nursing home deaths and encouraging vaccine news) and negative ones (rising caseloads and falling vaccination numbers). Since then, the good news has largely continued, and the bad news has not. Below is a new update, with help from three charts.

When the number of new cases began rising last month, it was reasonable to wonder if the more contagious virus variants were on the verge of sparking a nationwide surge. They have not. In retrospect, the February increase looks like a blip: 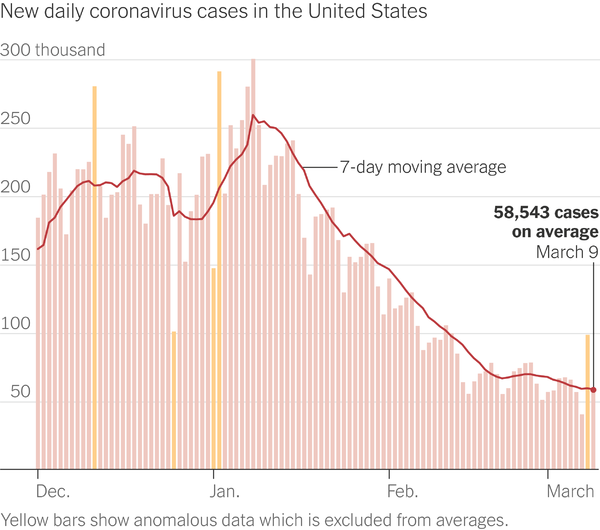 One caveat, as you can see in the chart, is that the recent decline is much gentler than the declines during most of January and February. The reasons aren’t wholly clear, and the variants may play a role. Either way, it’s another sign that the pandemic is not on the verge of ending.

The pace of vaccination slowed last month, because of winter storms. But it has now picked up again, and more than two million Americans per day are receiving shots:

The current pace won’t be impressive for long. By the end of the month, the federal government will be receiving an average of more than three million doses a day, from Johnson & Johnson, Moderna and Pfizer. At that point, three million daily shots will be a more sensible goal.

How quickly the Biden administration and state governments can get there will help determine how many lives are saved and how quickly normal life returns.

I recommend you keep two different ideas about the variants in mind at the same time: First, one or more of the variants could create terrible problems — by being highly contagious, by reinfecting people who already had Covid or by causing even more severe symptoms. A British study released yesterday, for instance, found that the B.1.1.7 variant increases the risk of death in unvaccinated people.

But — here’s the second idea — the overall evidence on the variants has been more encouraging so far than many people expected. The vaccines are virtually eliminating hospitalizations and death in people who contract a variant. Reinfection does not seem to be widespread. And even if the variants are more contagious, they have not caused the kind of surges that seemed possible a couple of weeks ago.

In Florida, where B.1.1.7 has spread widely, “there’s no sign of any increase in cases,” Dr. Eric Topol of Scripps Research wrote. In South Africa, where the B.1.351 variant was first detected, cases are nonetheless plunging:

It’s a remarkable decline, given the variant. What explains it? Growing natural immunity appears to be part of the reason, The Financial Times has reported. Rising vaccinations are also helping. So did the restrictions that South Africa imposed in late December and January, including “a ban on alcohol sales, the closing of all land borders and most beaches, and an extended curfew,” Bloomberg explained.

South Africa’s situation also serves as a useful summary of where the U.S. stands: Natural immunity has become a significant force in slowing the pandemic, but government policy can still make a big difference, by accelerating vaccination and discouraging needlessly risky behavior.

Over the past week, another 12,000 Americans died of Covid. The crisis continues.

In other virus news:

The U.S. plans to purchase an additional 100 million doses of the Johnson & Johnson vaccine, which may be used to inoculate children once the F.D.A. allows it.

The Biden administration has loosened its guidelines for nursing home visits. The advice recommends outdoor visits, but says that “responsible indoor visitation” should be allowed.

The House passed the pandemic relief bill. No Republican lawmaker voted in favor, but polls show the legislation has widespread public support.

The bill will do more than cut poverty: It also contains tax benefits and health insurance subsidies that will help many middle-class families.

Do you qualify for a stimulus check? When will it arrive? The Times answers frequently asked questions.

Wall Street analysts have been warning about the onset of inflation for years — wrongly. Will stimulus money mean that this time is different?

Beth Moore, a prominent evangelical Christian, said she was leaving the Southern Baptist denomination, partly because of its embrace of Donald Trump.

The federal authorities are investigating the founder of the Oath Keepers, an antigovernment militia, in connection with the Capitol attack.

The U.S. and Iran seem to be at an impasse over talks about resuscitating the 2015 nuclear accord.

Fallout from Prince Harry and Meghan’s interview continues in Britain, raising questions about racism in the British press.

Ten Years Later: In 2011, a tsunami destroyed the Japanese village of Kesen. Residents have realized that the emptiness is forever.

From Opinion: If American democracy is to survive, the filibuster must go, The Times’s editorial board argues.

Lives Lived: In 1994, thieves stole “The Scream,” Edvard Munch’s masterpiece, from the National Gallery in Oslo. Three months later, it was returned, thanks largely to the efforts of a Scotland Yard detective named Charles Hill. Hill died at 73.

Last month, someone bought an animated gif of a flying cat for more than $500,000. A short video by the artist Beeple went for almost $7 million. Anyone can still view or share the clips. So what’s the point of owning them?

It may not make sense to everyone — and has elements of a financial bubble. It mostly comes down to very expensive bragging rights, as well as the potential of reselling it for more money.

These rights are known as NFTs, short for “nonfungible tokens.” “It seems crazy to do that for something purely digital that can be easily copied and shared across the internet,” Erin Griffith, a Times tech reporter who has written about the trend, told us. “But the popularity of NFTs shows that people are willing to pay for special, scarce collector’s items.”

The technology has made it easier for artists, musicians and sports franchises to make money from digital goods. The N.B.A. recently introduced a series of NFTs, Top Shot, that turn highlight clips into trading cards. In music, the latest album by Kings of Leon is an NFT.

Swallows are a satisfying accompaniment to vegetable soups and stewed meats. There’s an art to eating them.

“Brood” by Jackie Polzin is a “wonderfully written first novel, full of nuance and humor and strangeness,” the novelist Elizabeth McCracken writes in a review.

Don’t count out the cloth coat, this winter’s colorful hit.

The hosts celebrated the stimulus bill.

The pangram from yesterday’s Spelling Bee was handbook. Here is today’s puzzle — or you can play online.

P.S. The Senate confirmed Janet Reno as the nation’s first female attorney general 28 years ago today. The Times’s story quoted a certain Delaware senator praising her: “President Clinton — albeit not the first time at bat — has hit a home run.”

Today’s episode of “The Daily” is about parallels between Diana and Meghan. On “Sway,” Spike Lee discusses his films.