Good morning. Biden and Trump are holding competing TV events. A look at Amy Coney Barrett’s last day of questioning. And virus cases in Europe now exceed those in the U.S. 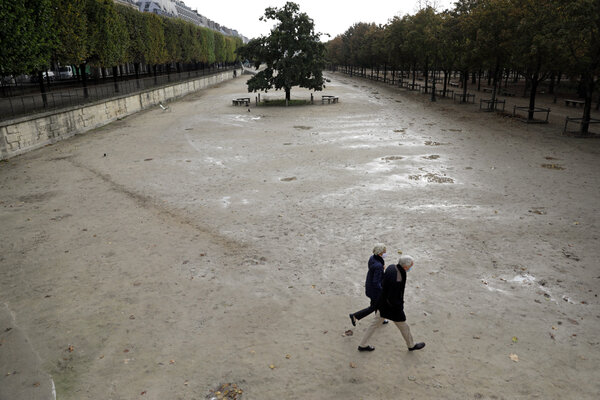 The autumn wave of the coronavirus has reached a dangerous new stage. The number of new daily cases has risen almost 50 percent in the U.S. over the past month. The situation is even worse in Europe.

For the first time since late March, the per capita number of new cases in Europe exceeds the number in the U.S.:

“The virus is everywhere in France,” the French president, Emmanuel Macron, said yesterday, while imposing a nighttime curfew in major cities.

The onset of cooler weather, which is driving more people indoors, seems to be playing a big role. And many people seem to have grown tired of pandemic restrictions, leading politicians — in both Europe and the U.S. — to lift restrictions prematurely.

In late June, as The Times’s Mark Landler writes from Europe, residents in Prague held a dinner party stretching across the Charles Bridge to celebrate what they called — wrongly — the end of the outbreak. Italy and Spain welcomed summer tourists.

But the pandemic hasn’t gone away. While treatments are getting better, many people are still dying — including almost 6,000 in India over the past week, 5,000 in the U.S., 1,700 in Iran, 850 in Spain and about 600 in both Britain and France. A widely available vaccine is still months away, even if the current research trials go well.

Amid all of this bad news, it’s worth keeping in mind that some countries continue to fight the virus successfully. The per capita rate of new cases in Canada is less than half as high as it is in the U.S. In Australia and much of Africa and Asia, the rate remains near zero.

In many places where case counts are rising, political leaders are reluctant to impose new lockdowns, because the public is tired of them. But that creates something of a Catch-22: The most reliable way to reverse big outbreaks of this virus has been through strict crackdowns.

In the U.S.: The virus is spreading in every region, with the highest case counts in the South and Midwest, as you can see in these charts.

After a huge aid expansion kept millions of people out of poverty this spring, the help is largely exhausted, and poverty in the U.S. has returned to levels higher than before the pandemic.

A Sweet 16 party on Long Island led to a coronavirus outbreak that forced more than 270 people to quarantine. “Yeah, it wasn’t that sweet,” Gov. Andrew Cuomo said.

Nick Saban, the head football coach at Alabama, tested positive. Two other colleges in his conference, Florida and L.S.U., postponed their next game after more than 20 Florida players contracted the virus.

In the early days of the pandemic, President Trump assured Americans that the virus was nothing to be concerned about. Behind the scenes, his economic advisers were telling wealthy donors otherwise, a Times investigation found.

Tonight was supposed to be the second presidential debate. Instead, Trump and Joe Biden will hold competing televised events, with Biden’s on ABC and Trump’s on NBC.

Some Democrats and media analysts criticized NBC for scheduling the Trump event at the same time as Biden’s, making it impossible for Americans to watch both candidates live.

Most Latino voters favor Democrats, but a small part of Trump’s base is made up of Hispanic men. They see the president as forceful, unapologetic and a symbol of economic success.

Judge Amy Coney Barrett signaled that an upcoming Supreme Court case on the Affordable Care Act might not threaten the entire law. Barrett said that a legal doctrine known as “severability” (it’s the legal equivalent of a game of Jenga: If you pull out one plank, will the entire tower topple?) could let the court strike down parts of the law without invalidating all of it.

Barrett declined to answer several questions related to Trump, including whether a president has a right to pardon himself. Legal experts are divided on the issue.

Yesterday was Barrett’s last scheduled day of questioning from senators. She is on track for confirmation on a near party-line vote.

Half the coral that makes up Australia’s Great Barrier Reef has died since 1995. Researchers said the decline would continue if no drastic action is taken on climate change.

A Morning read: “Like a lot of men, in pursuit of novelty and amusement during these months of isolation, I grew a mustache,” Wesley Morris writes. In an essay, he explores how a lark led to a better understanding of his Blackness.

Lives Lived: In 1985, Herbert Kretzmer, by then a lyricist and a song writer, was asked to reimagine an obscure French musical, “Les Misérables.” He wrote the English lyrics and turned it into one of the most successful and longest-running theater productions. Kretzmer was 95.

IDEA OF THE DAY: Unaccountable prosecutors

In February 2017, an audio reporter named Madeleine Baran received an email encouraging her to look into the case of Curtis Flowers, a Black man in Mississippi on death row. That email started her journey to what my late colleague Jim Dwyer called the “greatest journalism of our age.”

Flowers was the victim of a campaign by Doug Evans, a white local prosecutor, to convict him for a 1996 quadruple murder, despite no good evidence tying Flowers to the crime. Along the way, Evans committed multiple instances of prosecutorial misconduct, like barring Black jurors. After appeals courts threw out some of Flowers’s convictions, Evans kept trying him — over six different trials, keeping Flowers behind bars the entire time.

Baran and her colleagues at APM Reports told this story in the second season of their podcast, “In the Dark,” and brought national attention to it. Last year, the Supreme Court overturned Flowers’ conviction. On Sept. 4, Mississippi dropped the charges against Flowers.

If you haven’t yet listened to the podcast, I recommend starting with the first episode. If you have, you can listen to the final episode, released yesterday, in which Baran is finally able to interview Flowers.

So far, there is no sign that Evans will face any penalties for his misconduct.

For more: See this explainer, by APM’s Parker Yesko, on the broader lack of accountability of prosecutors. The podcast team also included Will Craft, Samara Freemark, Natalie Jablonski, Rehman Tungekar and Catherine Winter.

Fried chicken biscuits. Hot honey butter. This sandwich will give you something to look forward to come dinner time. Prep both components on the day you want to eat them for optimal crispness.

It “isn’t one of those books in which an intrepid author journeys behind enemy lines in order to write plaintively of our shared humanity,” Jennifer Szalai writes in a review. “One of the marvels of this furious book is how insolent and funny Lavin is; she refuses to soft-pedal the monstrous views she encounters.”

Buy local: Independent bookstores are asking for support from readers. “If you want Amazon to be the world’s only retailer, keep shopping there,” one ad says.

Life after the Test Kitchen

In June, staff members at the food publication Bon Appétit called out a discriminatory work environment that paid people of color less than white employees in similar jobs. Several Bon Appétit stars have since announced they will no longer appear in the brand’s popular YouTube videos.

Among the departures was Sohla El-Waylly, whose fans have created video montages dedicated to her skills. Through the controversy, she became a “symbol for the overqualified and underpaid,” E. Alex Jung writes in a profile of the chef in Vulture. El-Waylly, who is writing a cookbook and filming her own web show, said, “It became increasingly frustrating to become a sidekick to people with significantly less experience than me.”

Take a tour through New York City’s East Village, the neighborhood that used to be the home of punks and poets.

You can find all of our puzzles here.

P.S. N.Y.U.’s journalism institute selected its top 10 works of journalism of the past decade. Three were by Times journalists; the No. 1 spot went to the Atlantic essay “The Case for Reparations” by Ta-Nehisi Coates.

Today’s episode of “The Daily” is the first of a two-part series on the presidential candidates’ policies. On the first episode of the new Modern Love podcast, true stories of home and heartbreak.

Lalena Fisher, Claire Moses, Ian Prasad Philbrick and Sanam Yar contributed to The Morning. You can reach the team at [email protected].