We’re covering Israel’s complicated approach to the vaccinated and unvaccinated, a French fight against so-called Islamo-leftist tendencies and the NASA rover’s arrival on Mars. 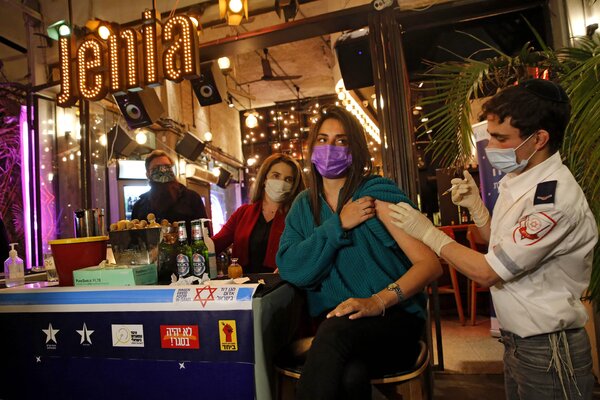 ‘Whoever does not get vaccinated will be left behind’

Israel’s government and business initiatives are moving in the direction of a two-tier system for the vaccinated and unvaccinated, raising legal, moral and ethical questions.

Under a new “green badge” system, starting Sunday, the government is making leisure activities accessible only to people who have been fully vaccinated or have recovered from the virus. Customers and attendees will have to carry a certificate of vaccination with a QR code.

Nearly half of Israel’s population of nine million has received at least one dose of the Pfizer vaccine, and more than 2.6 million people have gotten second doses. But about two million eligible citizens age 16 or over have not sought vaccines, despite food-based incentives like candy and the stew cholent. The average number of new daily infections is hovering around 4,000.

Quote: “Getting vaccinated is a moral duty,” said the health minister, Yuli Edelstein. “It is part of our mutual responsibility.” He also has a new mantra: “Whoever does not get vaccinated will be left behind.”

Related: The speedy vaccination program in Israel contrasts sharply with the situation in the occupied territories, where few Palestinians have received even one dose.

Life expectancy in the United States fell by a full year in the first six months of 2020, the largest drop since World War II.

Apple is redesigning its syringe emoji to look more like a vaccine vial, citing rising use of the emoji over the past year.

Hong Kong has approved the Covid-19 vaccine made by the Chinese company Sinovac, which has faced scrutiny around the world over shipping delays and spotty data disclosures.

The French fight against ideas that ‘corrupt society’

Stepping up its attacks on social science theories that it says threaten France, the French government announced this week that it would start an investigation into academic research that it says feeds “Islamo-leftist” tendencies that “corrupt society.”

The news immediately caused a fierce backlash among academics, deepening fears of a crackdown on intellectual freedom — especially on matters of race, gender, postcolonial studies and other fields that the French government says have been imported from American universities and contribute to the undermining of French society.

The lower house of France’s Parliament passed a draft law this week against Islamism, an ideology it views as encouraging terrorist attacks, as President Emmanuel Macron tilts further to the right, anticipating nationalist challenges ahead of elections next year.

Context: The seemingly esoteric fight points to a larger culture war, punctuated in the past year by mass protests over racism and police violence, competing visions of feminism and explosive debates over Islam and Islamism. It also follows years of attacks, large and small, by Islamist terrorists.

In its most ambitious effort in decades to directly study whether there was ever life on the red planet, NASA landed a new robotic rover on Mars on Thursday, nearly seven months after the rover left Earth.

While the agency has landed other missions on Mars, the $2.7 billion robotic explorer named Perseverance carries a sophisticated set of scientific tools that will bring advanced capabilities to the search for life beyond our planet. It was the third robotic visitor from Earth to arrive at Mars this month. Last week, two other spacecraft, Hope from the United Arab Emirates and Tianwen-1 from China, entered orbit around Mars.

Perseverance’s destination on the planet is Jezero Crater, where it will explore the delta of a river that once flowed into a lake that filled the crater. The piles of sediments are a promising place where the fossil chemical signatures of ancient Martian microbes might still be preserved today.

Opinion: Frigid Mars is the perfect place to search for ancient life, the planetary scientist Sarah Stewart Johnson writes. “Our early days on Earth have almost entirely disappeared, but on Mars, the past is entombed.”

If you have 6 minutes, this is worth it

The preservation of a whistled language

On La Gomera, one of the Canary Islands, a whistled language called Silbo Gomero that dates back centuries is still in use thanks to mandatory classes for schoolchildren, like Arantxa Cifuentes Gutiérrez, above, and a community that acts as a guardian to the language.

One such whistler, Antonio Márquez Navarro, is proud of what he calls “the poetry of my island.” And, he adds: “Like poetry, whistling does not need to be useful in order to be special and beautiful.”

U.S. immigration: President Biden’s allies introduced an immigration overhaul in Congress on Thursday that would provide a path to citizenship for 11 million undocumented Americans.

Belarus dissent: Two young journalists were sentenced to two years in prison for reporting via video stream from a demonstration against President Aleksandr Lukashenko’s rule, the latest episode in a campaign to silence all forms of opposition.

International relations: Mr. Biden’s plan to link arms with Europe against Russia and China is complicated by a European desire for a more balanced relationship, as the bloc seeks to chart its own course in ways that do not necessarily align with Mr. Biden’s goals.

Olympics: Seiko Hashimoto, one of Japan’s two female cabinet ministers, is the new head of the Tokyo Olympic organizing committee, following the resignation of Yoshiro Mori, who stepped down after saying that women talked too much in meetings.

GameStop: The House Financial Services Committee questioned key players in the two-week trading frenzy that drove up shares of the challenged video game retailer. There was bipartisan agreement that the debacle revealed an unfair system.

Snapshot: Above, melting and then boiling snow to make it safe to drink. After a winter storm caused power failures at water treatment plants in Texas, officials declared the water unsafe and advised residents to boil their water for safety. About 500,000 Texas homes and businesses are still in the dark.

New Zealand: Prime Minister Jacinda Ardern said on Thursday that all schools would make free menstrual products available to students for the next three years to reduce “period poverty” — a lack of access to pads or tampons.

Rare ferrets: Clones of an endangered black-footed ferret whose cells were banked in 1988 may offer a route to revitalizing the species, giving their uncloned peers the prospect of offspring with greater genetic diversity, which confers resilience and protection from inbreeding disorders.

What we’re reading: This Guardian long read on the rise of so-called Brazilian butt lifts and the sometimes dangerous quest for a perfectly peachlike posterior.

Read: If you’re new to the writer Toni Morrison’s work, or haven’t read her in a long while, here are some thoughts about where to start.

Celebrate the weekend — safely. At Home has our full collection of ideas on what to read, cook, watch, and do while staying indoors.

Covering restaurants in a pandemic

Pete Wells, our restaurant critic, wrote about his hunt for a good meal in New York, where the coronavirus pandemic has required restaurants to adapt to periods of closure and reopening for indoor and outdoor dining.

For months after all of the restaurant dining rooms in the city were ordered to close last March, I wrote nothing that resembled a review. The entire business and all of the people in it were suffering, and I spent my time as a reporter finding out how some of them were getting along.

Before the pandemic, I normally called chefs after I’d written a review of their restaurant but before it was published, to check facts. The chefs usually sounded as if I were calling with the results of a lab test.

The conversations I had last spring were different. They talked about going bankrupt, they talked about crying and not wanting to get out of bed. What did they have left to lose by talking to me?

By June, the crisis had settled into a kind of desperate stability. On the day outdoor dining began, I rode my bike into Manhattan to have lunch at the first open restaurant I could find. I was as thrilled to eat someone else’s cooking as I was to do something that resembled my old job.

It still took a few weeks before I wrote any reviews. At first, I worried that any opinion of mine would be unfair when restaurants were trying so hard to adapt to the new reality. Eventually, I understood that was exactly what would make the reviews worth writing. Good food in a pandemic was great; great food seemed like a miracle, and I was finding great food all around.

That’s it for this briefing. Have a fabulous weekend.

Thank you
Theodore Kim and Jahaan Singh provided the break from the news. You can reach the team at [email protected]

P.S.
• We’re listening to “The Daily.” Our latest episode is about Paul Rusesabagina, the “Hotel Rwanda” hero who is now accused of terrorism.
• Here’s our Mini Crossword, and a clue: “Beats me!” (five letters). You can find all our puzzles here.
• Kathleen Kingsbury, our Opinion editor, spoke with Nieman Lab about reimagining opinion journalism.