An outcry against gender violence.

We’re covering the start of a pivotal election year in Germany, a lockdown in Italy and an outcry in Britain against gender violence. 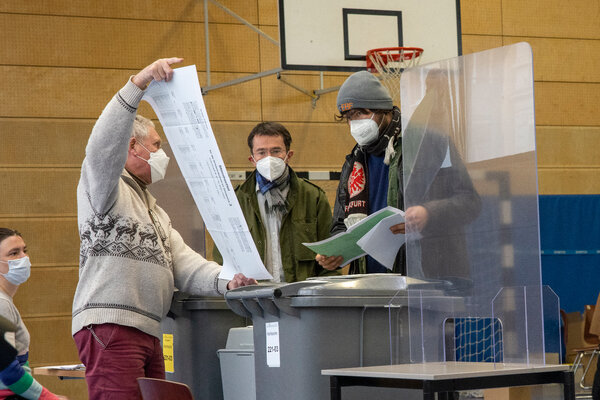 A crucial election year in Germany

Voters in Germany cast ballots on Sunday in two regional races, kicking off an election year that could change the course of Europe’s largest economy.

Germany is laying the groundwork for a major shift toward politics without Chancellor Angela Merkel. After 16 years in power, Ms. Merkel will step down when a new government is sworn in following parliamentary elections in September.

The outcomes of the races on Sunday, in the states of Baden-Württemberg and Rhineland-Palatinate, could indicate how voters are feeling about the two leading parties — the conservatives and the Greens — and help focus the contest for Ms. Merkel’s replacement.

German media: Julian Reichelt, the editor in chief of Bild, Europe’s largest newspaper and an influential force in German politics and society, has taken a leave of absence during an investigation into accusations by half a dozen female employees that he abused his position of authority and created a hostile work environment.

Italy prepares for a widespread lockdown

Three-quarters of the Italian population will enter a strict lockdown today, in a bid by the government to fight a rise in coronavirus infections. The spread of a more contagious variant first identified in the United Kingdom, combined with a slow vaccine rollout, led to a 15 percent increase in cases in Italy last week.

Northern regions, as well as Lazio and Marche in central Italy, and Campania and Puglia in the south, will shut schools and bar residents from leaving their homes except for work, health or certain other necessities. Supermarkets, pharmacies and a few other stores will stay open, but restaurants will be shut.

Fewer than two million people in the country have been fully vaccinated, because of late deliveries from pharmaceutical companies and logistical problems in some regions.

Official remarks: “I am aware that today’s measures will have an impact on children’s education, on the economy but also on the psychological state of us all,” Prime Minister Mario Draghi said on Friday. “But they are necessary to avoid a worsening that will make inevitable even more stringent measures.”

Ireland became the latest European country to pause its rollout of the AstraZeneca vaccine after some people who received it reported blood clots. There is no evidence of a causal link so far.

The last living man from a dwindling tribal community in Brazil has died from Covid-19.

Imams, rabbis and priests across the U.S. are coaxing their congregants to get vaccinated.

The emergence of new virus variants in South Africa and Brazil has shown that vaccine makers cannot afford to wait years before testing whether shots made for rich countries work in poorer ones, too.

A national outcry against gender violence

Thousands of people gathered in south London on Saturday for a vigil in tribute to Sarah Everard, the 33-year-old marketing executive whose killing has touched off a national reckoning over violence against women in Britain.

As darkness fell, a growing crowd chanted “Shame on you!” and “How many more!” Some held tea lights or signs that read “End Violence Against Women” and “She Was Only Walking Home.”

The police had warned that the vigil would be unlawful because of social distancing requirements. Photos from the event showed officers clashing violently with women, prompting widespread outcry and a call from the mayor of London and the British cabinet minister responsible for policing for an independent inquiry into the police’s tactics.

Explainer: Ms. Everard’s death has set off a social movement in which women are demanding safety from male violence — and demanding that the police, the government and men collectively be the ones to bear the burden of ensuring it.

An oasis in the pandemic

Taiwan, which has had just 10 Covid-19 deaths and fewer than 1,000 cases, has used its success to sell something in short supply: a chance to live without fear of the coronavirus. Above, shopping in Taipei on Friday.

The island is drawing Covid migrants — largely overseas Taiwanese and dual nationals, including some well-known figures like Eddie Huang, the Taiwanese-American restaurateur. The influx of people helped make Taiwan one of last year’s fastest-growing economies, one of the few to expand at all.

Myanmar: At least 51 people were fatally shot over the weekend, but the nationwide protest movement against Myanmar’s military coup a month and a half ago shows no sign of waning. Two districts in Yangon were placed under martial law after large demonstrations on Sunday.

Grammys: The first Grammy Awards since the pandemic featured Taylor Swift, BTS, Megan Thee Stallion and more. Here are the winners of the 63rd annual awards.

U.S.-Afghanistan: The United States has 1,000 more troops in Afghanistan than it previously disclosed. The undercount complicates President Biden’s deliberations on whether to carry out a complete withdrawal by May 1.

U.S.-Mexico border: President Biden directed the Federal Emergency Management Agency to help process thousands of unaccompanied children who are filling detention facilities at the border. He has also asked the Mexican government to help ease the surge of migrants.

Snapshot: Above, the cellist Yo-Yo Ma gave a surprise concert at a vaccination site in Massachusetts after receiving his second dose of a Covid-19 vaccine. He used the required 15-minute observation period after receiving his shot to play “Ave Maria” and Bach’s Prelude in G Major.

Caligula’s treasures: A mosaic crafted in the first century for a ceremonial ship commissioned by the Emperor Caligula went on display at an archaeological museum south of Rome. Lost for decades, it re-emerged several years ago as a Manhattan antiques dealer’s coffee table.

Guide to happiness: More than three million people took this course on happiness. What did they learn?

What we’re reading: This essay by the actor Riz Ahmed, in The Guardian, on being typecast as a terrorist — in airports.

Cook: In this supremely springy recipe, asparagus is roasted in the same pan as thinly sliced leeks and salty capers.

Listen: Enjoy recordings of five of the world’s newest instruments, among them a Lego guitar and a “war tuba.”

Jog: If you’re a runner, especially one who has hit the pavement more in the past year, there’s a good chance you need to upgrade your running shoes. Here’s some guidance to find your best fit.

Start your week with spring in your step. At Home has our full collection of ideas on what to read, cook, watch and do while staying safe at home.

A year ago this week, The New York Times shut down its offices because of the pandemic. It happened so fast that we didn’t have time to say goodbye. Sarah Lyall, our writer at large, wrote about how she misses going to the office. Here’s an excerpt.

The Times’s office is on several floors of a building that stretches from 40th to 41st Streets on Eighth Avenue near Times Square. It’s not normally the quietest place in the world — what do you expect, when your nearest neighbor is the Port Authority Bus Terminal? — but it’s our not-quiet place. It has an electricity to it, a frisson, a sense of community and a sense of purpose. It feels like something bigger than itself.

I love our busy newsroom, with its ergonomic desks, its glass-walled meeting rooms, its whiteboards scribbled with strange notations, its people bustling up and down stairways, its random pieces of exotic furniture nobody knows how to use, its layout that snarls up your sense of direction as you try to find a colleague from another department.

I miss all of that. Mostly, I miss the people I work with. I’ve experienced them as disembodied squares on my screen for so long now that I’ve forgotten what it’s like to be with them in real life. They’re smart, thoughtful, irreverent, friendly, difficult, brilliant, subversive, surprising. I miss our unexpected conversations in the elevators.

I miss making lunch dates in the cafeteria. I miss the buoyancy that comes when you work side by side with people you love and respect. I miss the office.

I hope we’ll all be back there soon.

That’s it for this briefing. Tomorrow we will be rolling out our redesigned morning newsletter. We hope you enjoy our new look!

Thank you
To Melissa Clark for the recipe. You can reach the team at [email protected]

P.S.
• We’re listening to “The Daily.” Our latest episode is Part 2 of “Odessa,” the series about a Texas high school that tries to bring back football during the pandemic.
• Here’s our Mini Crossword, and a clue: “Wow, that’s neat!” (five letters). You can find all our puzzles here.
• Elizabeth Kennedy, a longtime editor and reporter at The Associated Press, will be The Times’s new White House editor.