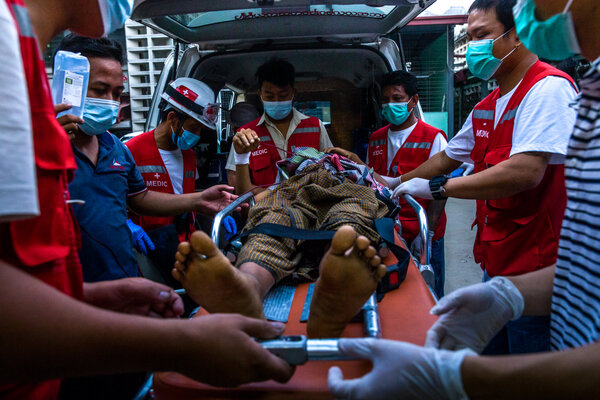 In what appeared to be the bloodiest day of protests since the Feb. 1 military coup, at least 90 people were gunned down by Myanmar security forces on Saturday, according to a rights group based in Myanmar and Thailand. Myanmar Now, a respected news site, reported that 114 people had been killed.

The bloodshed took place in more than two dozen cities. A Times photographer captured images of the violence. The security forces also opened fire at a funeral on Sunday, Reuters reported, quoting witnesses.

Quotable: “Today is a day of shame for the armed forces,” Dr. Sasa, a spokesman for a group of elected officials who say they represent Myanmar’s government, said in a statement.

From inside: Since the coup, the Tatmadaw, as the country’s military is known, has killed more than 420 people and assaulted, detained or tortured thousands of others. In interviews, four officers, two of whom deserted, paint a picture of an institution that has thoroughly dominated Myanmar for six decades.

The Ever Given is partially freed from the Suez Canal

After days of pushing and pulling from an armada of tugboats with the power of tens of thousands of horses, the vessel that had been stuck in the Suez Canal has been partially freed.

In the early hours of Monday morning, tugs dislodged the boat’s bow from the bank of the canal, Osama Rabie, the chairman of the Suez Canal Authority, which operates the waterway, told The Wall Street Journal.

Though the ship is now floating, it isn’t clear how soon the crucial shipping channel will reopen, allowing the passage of hundreds of cargo ships that are currently waiting to traverse the canal. Here’s the latest.

Effects: Some ships had started contemplating a far more expensive route: forsaking the channel and heading the long way around Africa. Analysts estimate that the traffic jam has held up nearly $10 billion in trade each day.

Russia struggles with a vaccine shortage

Russia is exporting its Sputnik V coronavirus vaccine to countries in Latin America, Africa and Europe to great fanfare, declaring it “a vaccine for all humankind.” But at the same time, it is quietly having to import supplies for its own population.

The imports, which come from South Korea and India and are expected to ramp up in coming weeks and months, could help Russia overcome a dismally slow vaccination rollout at home. They also illustrate that even countries whose scientists designed successful shots rely on cross-border trade for vaccine supplies.

Russian vaccine production got off to a slow start as producers strained for months in the fall to obtain biotechnology equipment that is made in China and that was in short supply.

After weeks of decline followed by a steady plateau, coronavirus cases are rising again in the U.S.

In Europe, the psychological fallout of the pandemic could unfold for months, or even years, public health officials say.

Brazil is reporting more new coronavirus cases and deaths per day than any other country in the world. The virus has killed more than 300,000 people in the country, a crisis fueled by a highly contagious variant, political infighting and distrust of science.

In Mozambique, insurgents seized control of the town of Palma on Saturday, after a three-day siege that has left at least several people dead and hundreds of other civilians unaccounted for. Nearly 200 people, including dozens of foreign workers, sought shelter inside a hotel.

With the murder trial of the officer who knelt on George Floyd’s neck set to begin today, the residents of Minneapolis are at war over public safety and the role of the police.

Democrats have spent the past several years clamoring to raise taxes on corporations and the rich. Now, under President Biden, they have a shot at ushering in the largest federal tax increase since 1942.

Belarus has been ejected from the Eurovision Song Contest for songs found to have repeatedly violated rules banning political content.

As the government in Serbia welcomes Chinese investors to save moribund businesses and bring much-needed capital, many Serbians are complaining of the environmental and political impact.

The home of Dr. Edward Jenner, where people were first inoculated against smallpox, has struggled during the pandemic, one of hundreds of museums in Britain teetering amid the lockdowns.

Antônio Sena, a Brazilian pilot working for wildcat miners, escaped death when his plane went down in a remote area. He walked through the jungle for 36 days before being rescued.

He fended off attacks from highly territorial spider monkeys, which proved to be a godsend. After watching them eat a pink fruit called breu, Mr. Sena assumed it was safe for human consumption, and it became his main source of sustenance. Besides that, he ate three small blue eggs from inambu birds, and little else.

His story has been a rare piece of uplifting news for a nation hit hard by the Covid-19 crisis. But it has also put a spotlight on Brazil’s illegal mining industry, which has flourished in recent decades in Indigenous territories and other parts of the Amazon that are supposed to be sanctuaries.

How The Times covers mass shootings

After a year without a large-scale shooting in a public place, the U.S. recorded two within six days. An armed man killed eight people, including six of Asian descent, in the Atlanta area on March 16, and 10 people were killed last Monday in Boulder, Colo.

What are the areas of special sensitivity when dealing with victims’ families?

We want to give readers a sense of the human tragedy of the event, so that means calling up loved ones of that person. Making that phone call is never pleasant, but it’s remarkable how often relatives are eager to talk about their loved one and give the public a sense of who that person was after they died in such tragic circumstances. On the other hand, understand that the person is full of grief and may not want to talk to you.

What is something you have learned in your many years of covering mass shootings?

We should not cover a particular mass shooting as though it’s a singular event. We should cover it as part of an American phenomenon that occurs with regularity, and we should try to understand why there are so many of these shootings occurring.

This one-pot French onion soup will fill your home with the scent of simmering porcini mushrooms.

Short on reading inspiration? Here are 12 books that our editors and critics are most excited about this week.

Designers around the world are finding inspiration in global upheaval. Many are looking ahead to a greener, healthier and more equitable world.

That’s it for today’s briefing. Thanks for joining me. — Natasha

P.S. Evan Hill, from our Visual Investigations team, appeared on MSNBC to discuss a new video showing the attack on a police officer who died after the Capitol riot.

The latest episode of “The Daily” is about a nursing home coming out of lockdown. On “Still Processing,” how TikTok is changing pop music.

You can reach Natasha and the team at [email protected].