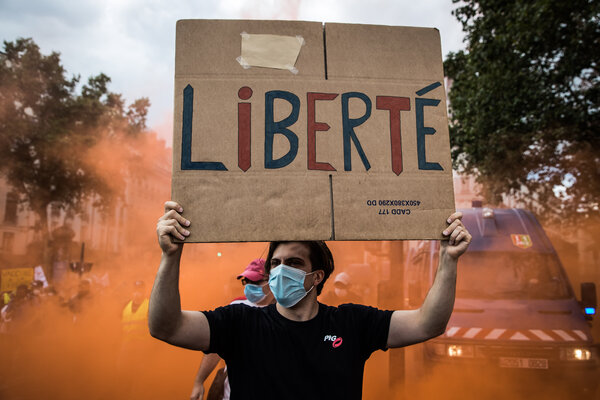 For the third week in a row, thousands took to the streets across France to protest the government’s health pass law, which bars those without proof of vaccination or a recent negative test for Covid-19 from many indoor venues. It was passed by Parliament but still needs a final greenlight from a top constitutional council, expected next week.

More than 200,000 people marched in Paris and in other cities, including Marseille, Rennes and Strasbourg, according to the French interior ministry. Across France, three police officers were injured and 19 people were arrested.

The protests come as the authorities try to stem a new wave of infections that is starting to put pressure on France’s hospitals, where 85 percent of Covid-19 patients are unvaccinated.

Politics: The demonstrators are united in their distrust of the news media and of President Emmanuel Macron’s government, and they include far-right and far-left activists, Yellow Vest members and vaccine conspiracy theorists, as well as vaccinated people who argue that the health pass is oppressive and unfair.

Deaths from Covid in Africa have increased 80 percent over the last four weeks.

The Biden administration has teamed up with TikTok stars to promote vaccinations.

U.S. health officials have expressed concerns over a simultaneous rise in Delta infections and cases of respiratory syncytial virus among children.

Belarus tried to forcibly send sprinter Kristina Timanovskaya home after she criticized her coaches for registering her for the wrong event at the Olympics. She announced on Instagram that the effort had failed and that she was under the protection of the Japanese police.

“I am afraid that in Belarus they might put me in jail,” she told the independent Belarusian news portal Zerkalo.io. “I am worried about my safety. And I think that at the moment it is not safe for me in Belarus.”

The Belarusian National Olympic Committee, which is run by Victor Lukashenko, the eldest son of its strongman leader, Aleksander Lukashenko, said that it had withdrawn Timanovskaya from the Games because of her “emotional and psychological state.”

In other Olympics news:

Track and field: The Italian sprinter Lamont Marcell Jacobs, who was born in El Paso to an Italian mother and American father, won the 100-meter dash with a time of 9.80 seconds. In the men’s high jump, Gianmarco Tamberi of Italy and Mutaz Essa Barshim of Qatar matched each other all evening until both failed to clear 7 feet 10 inches on three straight tries — and agreed to share the gold medal.

Gymnastics: Nina Derwael of Belgium, a two-time uneven bars world champion, took the gold in her specialty. Rebeca Andrade won the vault, and with it, Brazil’s first gold in women’s gymnastics.

BMX freestyle: Charlotte Worthington of Britain landed a 360 back flip, a first in women’s competition, and won gold in the new Olympic event.

Days before a new hard-line president is set to be inaugurated in Iran, Biden administration officials have turned sharply pessimistic about their chances of quickly restoring the nuclear deal that President Donald Trump dismantled.

International inspectors have been virtually blinded. At Iran’s major enrichment site at Natanz, centrifuges are spinning at supersonic speeds, beginning to enrich small amounts of nuclear fuel at near bomb-grade.

Biden’s aides make no secret of their concerns that the Iranians are learning so much from the work now underway that in the near future, perhaps as early as this fall, it may be impossible to return to the old accord.

Context: The Iranian government, including Ayatollah Ali Khamenei, the supreme leader who has the final word, is demanding the U.S. provide a guarantee that it will not walk away from the pact the way Trump did. U.S. Secretary of State Antony Blinken has said that in a democracy there is no way to tie the hands of a future president. But the Iranians have found some sympathy, even among America’s European allies.

The remains of Esther Dingley, a British woman who went missing in the Pyrenees mountains eight months ago, have been found.

Police on the Greek island of Lesbos have accused aid groups of helping smugglers of migrants, as the country faces criticism of its quick return of Turkish migrants.

Wildfires have killed at least six people in Turkey, part of a broader pattern of wildfires afflicting the Mediterranean this summer.

One of the largest apartment complexes built from timber in the world is rising in Stockholm.

The leader of Myanmar’s junta, Senior Gen. Min Aung Hlaing, effectively ruled out any return to democracy before 2023.

With the Taliban sweeping across much of the country, at least 30,000 Afghans are leaving each week. Lashkar Gah, the capital of Helmand Province, is in danger of falling to the insurgents.

In Sweden, a murder trial could shine an unsavory light on the Iranian president-elect, Ebrahim Raisi.

The man who critics warn could become Tunisia’s next dictator vowed to a Times reporter to preserve hard-fought rights, even as public gatherings of more than three people are banned.

The payments app Square said it plans to acquire the Australian “buy now, pay later” company Afterpay in a deal that values Afterpay at about $29 billion.

One night in Minnesota, shortly after the killing of George Floyd, someone set a fire in a Goodwill store. That action led to an international search for the culprits — and it exposed a growing system of global surveillance.

Who gets to decide which outfits are appropriate for athletes? It’s usually not the athletes themselves. But this year, some have rebelled.

Just before the Games, the European Handball Federation fined members of the Norway women’s team for wearing hot pants rather than the required bikini bottoms. (Their male counterparts wear voluminous shorts.) In Tokyo, the German women’s gymnastics team defied tradition by wearing ankle-length unitards to send a message “against sexualization in gymnastics.”

Their protest registered as “a subversive sensation,” the sports columnist Sally Jenkins writes in The Washington Post, and “tells you just how little Olympic competitors own their otherwise powerful forms.” The Times fashion critic Vanessa Friedman points out that similar questions arise in many workplaces. “Individuals have increasingly rebelled against the traditional and highly gendered dress codes imposed on them.”

Rebecca Liu, writing in The Guardian, describes how she was drawn as a child to the dazzle of rhythmic gymnastics. “Did I, at 6 — at 7, at 8, at 9 — ever sit down and think, ‘Yes, I want to embody a conventional vision of femininity in the uncanniest and most unsettling of ways?’” she writes. “No. I had simply wanted to be pretty.”

This three-course vegetarian dinner brings home the best of the market.

What to Listen To

Nadia Boulanger was known as music’s greatest teacher. A new festival —  and a Times playlist —  invites a reconsideration.

In “Pastoral Song,” James Rebanks, a farmer in England’s Lake District, tackles the confounding problem of how to make money from land without wrecking it.

Here’s today’s Mini Crossword, and a clue: Cuisine with spanakopita and souvlaki (5 letters).

That’s it for today’s briefing. Thanks for joining me. — Whet

P.S.: John Branch, one of our reporters covering the Tokyo Olympics, wrote about what the Summer Games are missing: people.

The latest episode of “The Daily” is on a controversy over a TV show’s portrayal of blindness.

Natasha Frost wrote the Arts and Ideas section. You can reach Whet and the team at [email protected].