We’re covering the explosive flareup in the Israeli-Palestinian conflict and looking at why China’s loosening of family planning rules hasn’t boosted births. 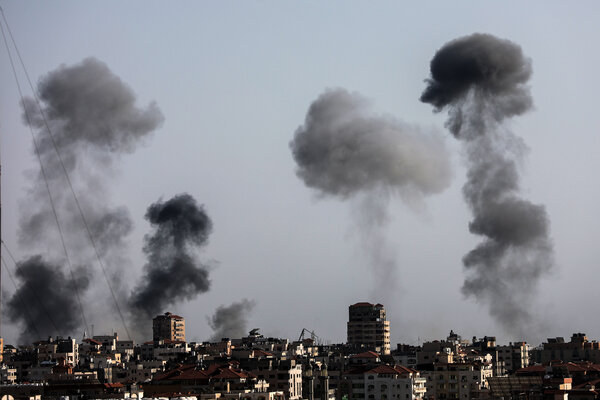 Fighting rages in Israel and Gaza

On the second day of rocket fire and airstrikes, Israel assassinated several commanders of the Palestinian Islamist group Hamas and hinted at a possible ground invasion of Gaza. The militants responded with a new barrage of more than 1,000 rockets fired at cities across southern Israel.

Here are the latest updates.

An Israeli military official said three infantry brigades were “preparing for a worst-case scenario,” confirming that a ground invasion could follow the bombardment from the air. Israel’s latest operation targeted the Qassam Brigades, the military wing of Hamas and one of several Palestinian militant factions active in Gaza.

International response: A senior U.S. diplomat is headed to the Middle East to meet with Israeli and Palestinian leaders to urge de-escalation. Tor Wennesland, the United Nations envoy for the Middle East, said that the situation was “escalating towards a full-scale war.”

A Covid spike in the world’s most vaccinated nation

The Seychelles won acclaim for becoming the world’s most vaccinated nation, relying heavily on China’s Sinopharm vaccine in its push to vaccinate more than 60 percent of its population.

But now, a surge in coronavirus cases, including among the fully vaccinated, is making some question the choice of vaccine. Scientists are warning that developing nations that choose to use the Chinese vaccines may end up lagging behind countries using vaccines with stronger efficacy numbers. Health officials said that while people were becoming infected, they were not getting very sick. Still, residents said the government had failed to give enough information about the vaccines.

The situation in the Indian Ocean island stands in contrast with that of Israel, which has the world’s second-highest vaccination rate and where infections have plummeted with use of the Pfizer vaccine.

Quotable: “You really need to use high-efficacy vaccines to get that economic benefit because otherwise they’re going to be living with the disease long-term,” said Raina MacIntyre, biosecurity expert at the University of New South Wales in Sydney.

Details: Among the population that has had two doses, 57 percent were given Sinopharm, while 43 percent were given AstraZeneca. Thirty-seven percent of new active cases are people who are fully vaccinated, according to the health ministry, which did not say how many people among them had the Sinopharm shot.

Goa, India, home to picture-perfect beaches that lure tourists each year, is facing a surge in coronavirus infections.

International donors have raised millions of dollars to help India during its Covid crisis, but the Modi administration has implemented hurdles for overseas organizations and guided the money to officially endorsed groups.

The World Health Organization said in a report that the virus variant spreading rapidly in India might be more contagious than most versions of the coronavirus.

Will China allow couples to have a third child?

Slowly, the ruling Communist Party is loosening its long-held restrictions over childbirth. Some local governments have tacitly allowed couples to have more than two children, and a growing number of voices have urged the government to abolish the rules.

A population census released this week showed a significant decline in birthrates, heightening the urgency for these changes. But the party is wary of giving up its control, our reporter writes, and has taken a piecemeal approach with exemptions in some cases.

Context: China’s one-child policy was in force from 1980 until 2016, when couples were allowed to have two children. Before they were unwound, family planning agencies corralled women to be fitted with intrauterine devices or coerced them into having abortions. They also collected billions in fines annually from rule breakers.

A case in point: The parents of Chen Huayun, 33, hid her or sent her to stay with her grandparents during school holidays because she was their second child. As civil servants, her parents would have been fired had she been found out. “It was only when they retired that their colleagues knew that I existed,” she said.

Republicans in the House of Representatives ousted Representative Liz Cheney from their leadership ranks for her refusal to stay quiet about Donald Trump’s election lies.

South Korean police are investigating Park Na-rae, a comedian, for “sexual harassment” for undressing a male doll and making “inappropriate” remarks during a skit.

The Philippines reported what it said were incursions into its exclusive economic zone by 287 maritime militia vessels from China, Reuters reported.

The French prime minister and the chief of staff of the army have condemned an anonymous letter signed by people claiming to be active-duty troops warning about impending “civil war” in France fueled by Islamism.

U.S. authorities detained almost 179,000 people along the border with Mexico last month, the highest number in at least two decades.

Ellen DeGeneres will step down from her daytime talk show next year.

Colombia’s police spent decades fighting left-wing guerrillas and paramilitaries. It was a force built for war, and now it has found a new one — on the streets of Colombia’s cities, where the police stand accused of treating civilian protesters as battlefield enemies.

The power of a check mark

Achieving daily goals can be hard. About a decade ago, Amitava Kumar assigned a class of college seniors to write something every day — in part to motivate himself to write.

To succeed, Kumar tried a simple trick: After completing each day’s task, he would put the date and a check mark on the notebook’s final page. Somehow, it worked — by the end of the year, he had completed a short book.

Today, check marks serve a larger purpose for Kumar. They remind him that he is a writer. “It is the visible symbol of my realization that who I am is defined by what I do,” he writes in The Times Magazine’s letter-of-recommendation feature. And he explains why you might like them, too. “The check mark is more important than whatever comes of the daily work whose completion you’re marking,” he argues. “The first represents actual living; the second, merely a life.”

Related: Atul Gawande’s 2007 piece in The New Yorker on the power of checklists.

For Eid al-Fitr, the end of Ramadan, we have these recipes to celebrate the breaking of the fast, including namoura, a syrup-soaked Lebanese cake.

Poison ivy might be irritating but it also has underappreciated superpowers. Here’s how to deal with it.

Exercise may help us flourish, helping us keep a strong sense of purpose.

Here’s today’s Mini Crossword, and a clue: Walk like a peacock (five letters).

The latest episode of “The Daily” is about Representative Liz Cheney.

Claire Moses wrote the Arts & Ideas. You can reach Melina and the team at [email protected].