China says one of its vaccines is 79 percent effective.

We’re covering China’s rollout of vaccines, prison sentences for Hong Kong protesters, and what New Year’s Eve celebrations will look like around the world. 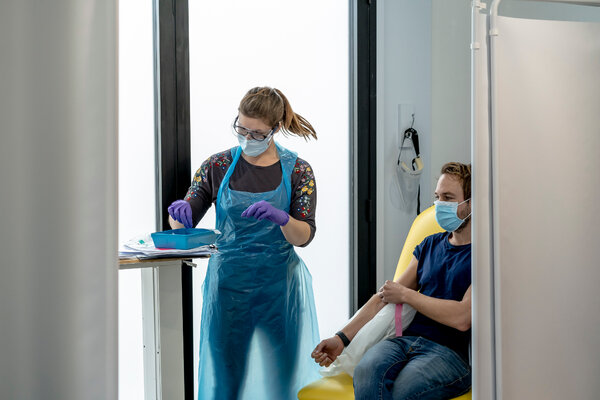 China’s state-controlled firm Sinopharm said that a coronavirus vaccine candidate made by its Beijing arm was 79 percent effective in late-stage trials and that it had asked Chinese regulators to allow the vaccine to be used broadly.

But Sinopharm’s announcement provided no breakdown of results and left many questions unanswered. Officials have already moved ahead with plans to vaccinate 50 million people by mid-February, in time for the Lunar New Year holiday.

On Wednesday, Britain became the first country to approve the Oxford-AstraZeneca vaccine for emergency use, opening a path for a cheap and easy-to-store shot. At $3 to $4 a dose, it costs a fraction of some other vaccines, and is likely to become the world’s dominant form of inoculation.

Looking back: The first alarm over the coronavirus was sounded a year ago, on Dec. 30. Our reporters examined the 25 days that changed the world.

The numbers: A new study released by the Chinese Center for Disease Control has suggested that the number of infections in Wuhan may have been far higher than official data shows.

A significant subset of patients recovering from Covid-19 are having to return to hospitals, sometimes repeatedly, with complications triggered by the disease or the body’s battle against it, studies show.

Millions more people in England were told they will be placed under the country’s tightest regulations starting Thursday to stop the spread of a contagious coronavirus variant, but the government stopped short of introducing a full national lockdown.

The first U.S. case of the more contagious coronavirus variant that was initially discovered in Britain was found in Colorado on Tuesday.

The E.U. and China approve an investment deal

Chinese and European Union leaders agreed on Wednesday to make it easier for companies to operate in each other’s territory.

But the landmark pact faces political opposition in Europe and Washington that could ultimately derail it. A large faction in the European Parliament opposes the accord because it does not do enough to stop human rights abuses in China.

It loosens restrictions imposed on European companies operating in China, and opens up China to European banks, which have struggled in recent years.

Context: In case you missed it, yesterday’s briefing featured a Q. and A. on the central points of the deal. We’ll learn more about the details in the coming days.

Jail sentences for Hong Kongers who fled by boat

A mainland Chinese court on Wednesday sentenced Hong Kong protesters, who had been arrested by the Chinese authorities while fleeing the city by speedboat, to between seven months and three years in prison.

The case of the 12 protesters was closely watched by Hong Kong’s beleaguered opposition movement. Their experience — which included being detained for months without charges — embodied Hong Kongers’ worst nightmare of being subjected to the mainland’s criminal justice system.

Family members denounced the proceedings as unjust. “We don’t really know what happened during the detention or during the trial — what kind of evidence was presented,” the sister of one activist said.

Details: The 12 protesters were caught in August by the Chinese Coast Guard while trying to reach Taiwan. Eight were sentenced for illegally crossing a boundary, and two others were charged with organizing the escape. The last two of the group, juveniles at the time, were returned to Hong Kong police custody.

If you have 4 minutes, this is worth it

A Hollywood breakthrough, in between classes

At just 12, Helena Zengel has already won the German equivalent of the Oscars. Now she has landed a starring role in “News of the World,” opposite Tom Hanks, whom she had never heard of before the film.

We caught up with her as she finishes seventh grade from home. Despite many of the dark roles she has played, she is just a normal kid, our reporter wrote. “As long as you’re happy with it, then you’re doing it right,” Zengel said of acting. “Also, it’s very fun to run around and scream.”

Brexit: The House of Commons overwhelmingly endorsed the trade deal on Britain’s departure from the European Union by 521 votes to 73, sending it to the House of Lords, where ratification is also expected later in the day. The deal will go into effect on Friday and shape ties between Britain and Europe in the coming decades.

Indonesia: The government outlawed the hard-line Islamic Defenders Front and ordered it to cease all activities less than two months after its leader, Rizieq Shihab, returned from self-imposed exile and pledged to push for a more conservative Islam. Officials said 29 of its members had been charged with committing acts of terror.

Yemen attack: At least 16 people were killed and 60 others wounded in an attack on an airport in Aden just as a plane carrying members of the country’s newly formed government cabinet was arriving. The new cabinet was supposed to be a step toward resolving Yemen’s civil war.

Snapshot: Above, a test run of the confetti drop in Times Square, which will ring in 2021 without the crowds amid the coronavirus pandemic. New Year’s Eve will look different in cities around the world, but people will still raise a glass to toast the start of 2021.

What we’re reading: John Hendrickson’s powerful essay in The Atlantic about President-elect Joe Biden’s stutter — and Hendrickson’s own — “wasn’t just the single best story about Biden this year; it changed how I think about him,” writes Ian Prasad Philbrick, who works on The Morning.

Cook: The humble potato in this pommes Anna recipe becomes a glistening, elegant jewel with nothing more than attentive care, a sharp blade and good butter.

Read: Children of all abilities glide from page to stage with the likes of American Ballet Theater and New York City Ballet pros in these five dance picture books.

Do: For many, 2020 provided lots of worries that kept us tossing and turning at night. Here are some tips to help you sleep better in the new year.

We can help you celebrate. At Home has ideas on what to read, cook, watch and do while staying safe at home.

Things our bosses said a lot this year

The coronavirus pandemic gave 2020 a new dictionary, and seemingly overnight, corporate America began speaking with a new language. These are some of the phrases whose use skyrocketed this year, based on more than 20,000 corporate presentations that The Times analyzed with Sentieo, a research firm.

“These are unprecedented times. A lot of our reopening is not just our decision. We’re not fully in control.” — Christine McCarthy, C.F.O. of the Walt Disney Company, on Sept. 9

That’s it for this briefing. There won’t be a newsletter tomorrow. We’ll be back in 2021. Happy New Year! Here’s hoping that the transition into the next year leaves you feeling a little lighter.

P.S.
• We’re listening to “The Daily.” Our latest episode features a Black police officer reflecting on what it means to be part of the force in his hometown, Flint, Mich.
• Here’s our Mini Crossword, and a clue: E pluribus ___ (four letters). You can find all our puzzles here.
• How well do you remember this newsy year? The Morning newsletter put together an interactive news quiz for those who want to test their knowledge.