Some problems in India’s vaccine rollout.

We’re covering glitches in India’s vaccination campaign, China’s economic resilience during the pandemic and a Covid-19 hospital failure in Egypt. 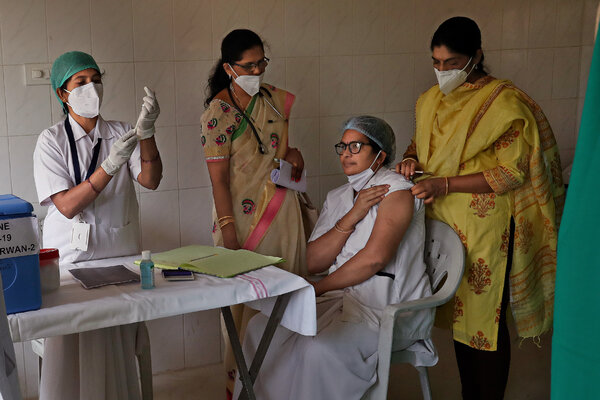 India’s coronavirus vaccine rollout, one of the largest in the world, has been hobbled by technical glitches in a mobile phone application, leaving the country far short of its vaccination goals in the first few days of the campaign.

State officials complained of problems with a digital platform called the Covid Vaccine Intelligence Network, or CoWIN, which is used by vaccine providers and recipients to monitor progress. Vaccine recipients have to sign up through the app.

The software became overwhelmed and didn’t work at many vaccination sites as the campaign began on Saturday. India is planning to vaccinate 1.3 billion people, as it battles the second-highest case count and third-highest death count in the world.

Australia’s health secretary said the country was unlikely to fully reopen its borders in 2021, despite vaccination efforts and pressure from the tourism industry.

Nearly one year after the virus was first detected in the U.S., the country reached another milestone in cases and is hurtling toward 400,000 total deaths.

In Japan, the health ministry reported three new cases on Monday of the variant that spread in Britain, the first to be discovered among residents with no travel history.

China’s economy grows, but there are weak spots

As most nations around the world struggle with new lockdowns and layoffs during the pandemic, only one major economy has bounced back after bringing the coronavirus mostly under control: China.

The economy grew 2.3 percent last year, the country’s National Bureau of Statistics announced on Monday. By contrast, the U.S., Japan and many nations in Europe are expected to report steep falls in output. Exports and infrastructure have fueled the growth.

Despite the good news for China, the growth figures were still the lowest in 40 years. And there are pockets of weakness, like the lack of jobs for recent college graduates with little experience. Hotels and restaurants in inland provinces have not fully recovered like those in the major cities.

Obstacles: So much of China’s success in the past year stemmed from its ability to stamp out the coronavirus — but new outbreaks are challenging that resilience. The authorities are starting to reimpose a wide variety of health checks that are discouraging consumers from spending money.

As President Trump prepares to leave office this week, the chaos that reached a fever pitch in the final weeks will outlast his tenure. There are now more troops stationed in Washington than in Afghanistan, Iraq, Syria and Somalia; the coronavirus is ravaging the country; and an impeachment trial looms.

It’s unclear when Speaker Nancy Pelosi will formally send the article of impeachment to the Senate, but once she does the chamber has to immediately move to begin the trial.

A slim Senate majority will allow Democrats to move ahead more easily on pandemic relief and cabinet appointments. Senators are scheduled to begin confirmation hearings this week, and they will do so with a phalanx of heavily armed National Guard troops nearby.

Biden’s first plans: President-elect Joe Biden plans to cancel the Keystone XL Pipeline permit on his first day in office, amid a flurry of executive orders.

A Covid hospital failure in Egypt

A video showing coronavirus patients at a hospital struggling to get oxygen went viral on social media this month, drawing outrage across Egypt. Four people died that night, when Ahmed Nafei, a relative of one of the patients, pulled out his phone and began filming, but the government denied that the hospital had run out of oxygen.

Our investigative reporters talked to witnesses and analyzed the footage showing that an oxygen shortage was the result of a cascade of problems at the hospital. “The whole world can admit there’s a problem, but not us,” one doctor said.

Aleksei Navalny: A judge ordered the Russian opposition leader to be jailed for 30 days, pending a trial. Mr. Navalny was arrested late Sunday upon his arrival in Moscow from Germany, where he was recovering from a nerve-agent attack.

TV drama in India: Bollywood once again has fallen into the cross hairs of India’s ruling Bharatiya Janata Party, as politicians file criminal complaints against the Amazon web series “Tandav.” Among other objections, they accused the series of disrespecting Hindu gods, belittling members of individual castes and sullying the office of the prime minister.

Samsung chief jailed: A court sentenced Lee Jae-yong, the vice chairman who runs the sprawling conglomerate, to two and a half years in prison for bribing Park Gyun-hye, the president who was impeached in 2016 on corruption charges.

Snapshot: Above, a virtual NASCAR race. When the pandemic shut down motorsports, the industry turned to simulated racing. No one knew if digital cars would draw viewers and pay off for sponsors, but 10 months in, the gamble seems to be paying off.

What we’re looking at: This Twitter thread of animals interrupting wildlife photographers. It’s a wonderful pick-me-up.

Listen: Olivia Rodrigo’s new single, “Drivers License,” which holds the single-day streaming record on Spotify, and other new tracks from Flo Milli and Lana Del Rey are among the recent picks for our pop critics’ playlist.

Do: The new year is a good time to focus on paying down credit card balances, even if you are carrying less credit card debt than you were before the pandemic.

You can find more recommendations on what to read, cook, watch and do while staying safe at home in our At Home collection.

What our reporters saw at state capitols

The past couple of weeks have been full of tense moments not only in Washington, but also in state legislative buildings where armed groups of pro-Trump protesters have gathered. Our reporters documented what they saw on the ground on Sunday.

Lansing, Mich: A small group of people armed with military-style weapons gathered in front of the State Capitol on Sunday morning, but with National Guard troops and State Police surrounding the building, nearly all of the protesters who had shown up were gone by early afternoon. “That’s why I’m here, because my vote got stolen,” one attendee said.

Salem, Ore.: Five men dressed in military-style clothing marched onto the grounds of the park across the street from the Oregon State Capitol around 10:30 a.m. They waved flags, including an upside-down American flag, and one held a “Disarm the Government!” sign made with marker on a white poster. “We always end up losing rights, whoever’s in office,” one protester said.

Austin, Texas: The Texas State Capitol had been closed out of concerns over the protest. Armed officers from the Texas Department of Public Safety patrolled the rolling Capitol grounds and guarded the entrance to the nearby governor’s mansion. “The only reason I’m here is to ensure that no one storms the Capitol,” one attendee said. “If they do, I’ll get in front of them and be trampled.”

P.S.
• There’s no new episode of “The Daily” while we celebrate Martin Luther King Day. May we recommend The Sunday Read on how a group of climate activists decided to fight global warming by doing whatever it takes.
• Here’s our Mini Crossword, and a clue: Soda bubbles (four letters). You can find all our puzzles here.
• The word “chiroptophobia” — the fear of bats, which has spiked during the pandemic — appeared for the first time in The Times yesterday, as noted by the Twitter bot @NYT_first_said.