Shock waves from the Harry and Meghan interview.

We’re covering the dramatic disclosures from the Harry and Meghan interview, the latest moves by Myanmar’s military to expand its control and global warming in the tropics. 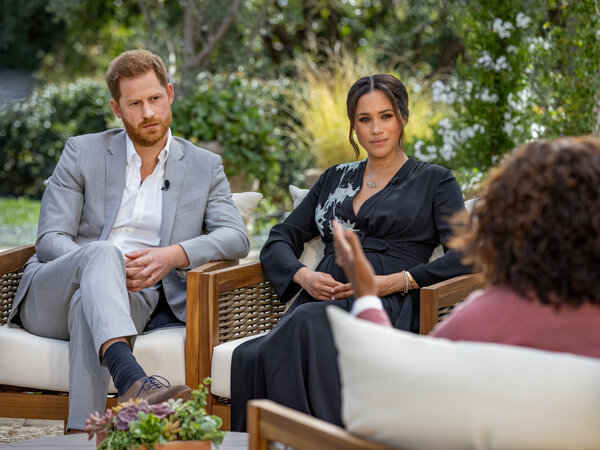 Hours after the interview was broadcast in the U.S. on Sunday, Britain was already grappling with the shock wave rippling out across the Atlantic, exposing a deep royal rift.

For many Black Britons, in particular, the interview offered a scathing assessment of the royal family and resurfaced barely submerged tensions over entrenched racism.

Recap: Meghan Markle made dramatic disclosures, including that there were “concerns and conversations about how dark” her son Archie’s skin might be when she was pregnant with him. (Harry later said neither Queen Elizabeth II nor Prince Philip was the source of that comment.) Meghan also disclosed that her life as a member of the royal family had become so emotionally desolate that she contemplated suicide. When she asked for help, she said, palace officials rebuffed her. Here’s what else we learned.

Reactions: The interview left the country divided, with major news outlets publishing biting commentary. On social media, some denounced the couple’s infidelity to the family, while others firmly defended them. The palace has not yet responded, and Prime Minister Boris Johnson said he wanted to stay out of royal matters.

The two-hour interview with Oprah Winfrey attracted 17.1 million viewers on CBS, according to preliminary Nielsen figures. The program is airing in Britain Monday night.

The military rulers that ousted Myanmar’s civilian leadership on Feb. 1 are expanding their control of urban centers, setting up makeshift operations on university campuses, hospitals and Buddhist pagoda complexes.

On Sunday, security forces stormed Yangon General Hospital and universities in Mandalay. “I think they are trying to prepare for a brutal war against the people,” a security guard at Mandalay Technological University said. The abbot of the Mahamuni Buddha Temple in Mandalay said that soldiers had taken over the pagoda’s grounds for a month.

The Tatmadaw, as the military is known, also revoked licenses from five independent media organizations on Monday, a severe blow to the country’s vibrant free press that could make the very act of reporting illegal.

More deaths: Three protesters were killed Monday as a general strike shut down workplaces across the country. More than 60 people have been killed since the military coup and about 1,800 others have been detained.

Profile: U Kyaw Moe Tun, Myanmar’s ambassador to the United Nations, gave the U.N. General Assembly the defiant three-finger salute adopted by the protest movement, calling the military rule illegitimate. The generals fired him, but his replacement refused the job and the U.N. declined to recognize his dismissal, so he remains at his post.

Palestinian laborers with Israeli work permits have started receiving the Moderna vaccine. Israel plans to vaccinate at least 110,000 Palestinians over the next two weeks, including about 80,000 employed in Israel and about 30,000 employed in the West Bank.

Israel has outpaced the rest of the world in vaccinating its own citizens, including Jewish settlers in the West Bank, but has faced intense criticism for providing only token amounts of vaccine for Palestinians living under its control. The new vaccination campaign was worked out with the Palestinian Authority more than a month ago and approved by the Israeli government late last month.

Child marriage is increasing at alarming levels in many places, the United Nations says, and the pandemic is reversing years of hard-earned progress toward keeping young women in school.

Syria’s leader, Bashar al-Assad, and his wife have tested positive for the coronavirus. His office said the two were in good health.

Millions of students returned to schools in England on Monday for the first time since January, as the country takes its first major step out of lockdown restrictions.

If you have 3 minutes, this is worth it

The tropics could become a deadly hothouse

Here’s one more reason the world should aim to limit warming to 1.5 degrees Celsius, a goal of the Paris Agreement to combat global warming: It will help the tropics avoid episodes of high heat and high humidity that go beyond the limits of human survival, according to a new study.

Extreme heat and high humidity prevent the body from cooling down, stressing the cardiovascular system. The tropics, a region that encircles Earth at the Equator, is home to more than 3 billion people. Above, Aceh, Indonesia, part of the region.

Australia murder case: In 2003, a court sentenced Kathleen Folbigg to 40 years in prison for smothering her four children, with tabloids calling her a murderer. But after years of her claiming innocence, saying the children died of Sudden Infant Death Syndrome, 90 scientists say she is right and are demanding her release.

George Floyd: Jury selection is scheduled to begin on Monday in the trial of Derek Chauvin, the former police officer charged in connection with Mr. Floyd’s death. Mr. Chauvin is charged with second-degree murder and second-degree manslaughter.

Afghan peace: U.S. Secretary of State Antony Blinken has proposed a United Nations-led peace conference in Turkey aimed at forming an inclusive Afghan government with the Taliban and establishing a three-month reduction in violence leading to a cease-fire. The U.S. has not decided whether to withdraw its remaining 2,500 troops from Afghanistan by May 1.

Snapshot: Above, a protest on Monday against the rise in fuel prices in Kolkata, India, for International Women’s Day.

What we’re reading: This Foreign Affairs article by Cai Xia, a former Chinese Communist Party insider, on why she backed away from Beijing.

Cook: Curry paste is the star in this Thai curry risotto, effortlessly lending lots of flavor.

Read: Imbolo Mbue’s “How Beautiful We Were” is set in an African village ravaged by an American oil conglomerate. What starts as a David-and-Goliath story slowly transforms into a nuanced exploration of self-interest, of what it means to want in the age of capitalism and colonialism.

Do: Here are five workouts that take less than 10 minutes.

Let us help you discover an interesting pastime. At Home has ideas on what to read, cook, watch, and do while staying safe at home.

The prolific translator Margaret Jull Costa, who has brought Portuguese- and Spanish-language fiction and poetry into the English-speaking world, spoke to our Books desk about what she’s reading.

What books are on your night stand?

Well, none, since I never read in bed, but there’s always a pile next to my favorite chair. At the moment, this includes “Buddenbrooks,” which we’re reading with a group of friends, “Le Château de Ma Mère,” by Marcel Pagnol, which my husband and I are reading with our French tutor, a collection of novellas and short stories by the Portuguese writer Maria Judite de Carvalho, who I’m keen to translate more of. And Michael Gorra’s “Portrait of a Novel,” about the writing of “Portrait of a Lady” (possibly my favorite novel), which has been on my pile for far too long and should be read soon.

“Mrs. Dalloway,” by Virginia Woolf. Her prose is sometimes poetry. Listen to this: “Fear no more says the heart, committing its burden to some sea, which sighs collectively for all sorrows, and renews, begins, collects, lets fall.” And she’s such a compassionate describer of her characters with all their flaws. I hadn’t read the novel for years, and it was such a joy to revisit and rediscover it.

What book, if any, most influenced your decision to become a translator?

I read a lot of Russian authors when I was in my teens without even realizing they were translations! It was only when studying Spanish before going to university that I was introduced to translating, and I just fell in love with the whole alchemical process of transforming one language into another.

That’s it for this briefing. We are redesigning your morning newsletter, and you’ll see a new version of it in your inbox in the near future. Stay tuned.

See you next time.

Thank you
Whet Moser and Carole Landry helped write this briefing, and Theodore Kim and Jahaan Singh provided the break from the news. You can reach the team at [email protected]

P.S.
• We’re listening to “The Daily.” Our latest episode is the second part of our look at the biggest issues facing the Biden administration.
• Here’s our Mini Crossword, and a clue: Sounds from owls (five letters). You can find all our puzzles here.
• The Times won 127 awards in the Society for News Design’s Best of Digital Design competition. The Best in Show award went to our piece “Who Gets to Breathe Clean Air in New Delhi?”