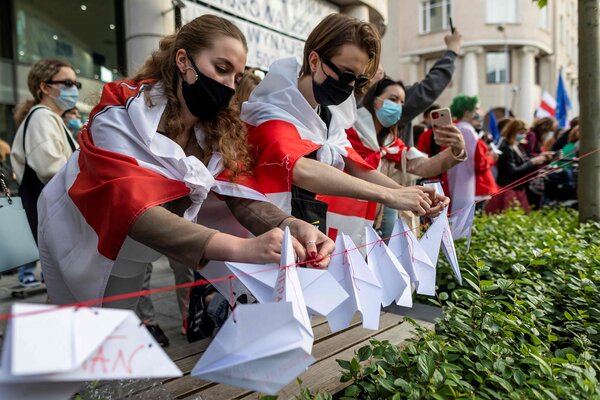 The E.U. yesterday urged airlines to avoid Belarus’s airspace and imposed sanctions on Aleksandr Lukashenko, the country’s strongman leader, a day after Belarus brazenly forced down a Ryanair commercial airliner so it could seize a dissident journalist onboard.

The British government said it would prohibit Belarus’s national airline from operating in the country, and some Eastern European airlines are diverting flights over Belarus airspace. Pete Buttigieg, the U.S. transportation secretary, has called for a safety review of flights operated by U.S. airlines over Belarus.

Rather than try to blunt diplomatic fallout, Lukashenko signed new laws cracking down further on dissent. The Belarusian Foreign Ministry said that what happened to the jet was in strict accordance with aviation rules, while Russia, Lukashenko’s main ally, stood by him.

Background: Who is Roman Protasevich, the 26-year-old detained journalist? He became a dissident as a teenager and fled the country in 2019, but has continued to roil Lukashenko’s government on the social media platform Telegram while living in exile in Lithuania.

A potentially more contagious variant of the coronavirus known as B.1.617.2 has begun to outpace other versions of the virus in Britain, putting pressure on the government to hasten second doses of vaccines. Government scientists said the variant was “highly likely” to be more transmissible than the one behind Britain’s devastating wintertime surge.

The new variant, which has become dominant in India since first being detected there in December, may be responsible in part for a grievous wave of infections across Southeast Asia and Nepal. It is now present in at least 49 countries.

Reassuring signs: A new study by Public Health England indicates that fully vaccinated people are about as well protected from the variant as they are from other forms of the coronavirus. The Pfizer-BioNTech vaccine offered 88 percent protection against the variant, while the AstraZeneca-Oxford vaccine was 60 percent effective.

New York City will eliminate remote learning come September, making it one of the first big U.S. cities to remove the option altogether.

More than 50,000 New Zealanders have escaped the pandemic by moving home. But they are once again confronting the challenges that made them leave: high housing costs and employment difficulties.

Israel’s new relationship with the U.S.

The U.S. secretary of state will travel to Israel today, seeking to bolster the nation’s cease-fire with Hamas. Antony Blinken will also use his trip to the region to work on humanitarian aid for Gaza, but he has no plans to pursue full-fledged peace talks.

For decades, Israeli leaders and voters alike treated Washington as essential to their country’s survival. But that dependence may be ending. While Israel still benefits greatly from American assistance, analysts say the country may have achieved effective autonomy from the U.S.

Though the U.S. still has some leverage, as it does with every country where it provides arms and diplomatic support, it may be declining past the point at which Israel is able and willing to do as the U.S. wishes. Once reliant on American arms, Israel now produces many weapons domestically.

Context: The change comes just as a faction of Democrats and left-wing activists, outraged over Israel’s treatment of Palestinians and bombing of Gaza, is challenging Washington’s long-held consensus on Israel — even as significant, if shrinking, numbers of Americans express support for Israel.

On the ground: The police in Israel have arrested more than 1,550 people on suspicion of involvement in the recent outbreak of mob violence between Arabs and Jews, of which 70 percent were Arab citizens of Israel while 30 percent were Jewish.

Charges including manslaughter and negligence are being considered after 14 people died in a cable car accident Sunday near Lake Maggiore in northern Italy.

The original 2007 video “Charlie Bit My Finger,” a standard-bearer of viral internet fame, has sold as an NFT for $760,999. The family who created it will take down the original from YouTube for good.

The actor Kevin Spacey has been cast in an Italian film in what will be his first appearance in a feature since accusations of sexual assault against him started surfacing more than three years ago.

Daw Aung San Suu Kyi, 75, made her first court appearance since the military coup that detained her and ended her term as Myanmar’s leader. She faces a raft of charges, and if found guilty, could be imprisoned for life. Above, lawyers for Ms. Aung San Suu Kyi.

More than 170 people were trapped in a storm and 21 died during a 62-mile mountain race in Gansu Province, China. Our reporters traced what happened in the perilous and quickly shifting weather conditions.

The state of Florida will fine social media companies that permanently bar political candidates, a direct response to Facebook’s and Twitter’s suspensions of Donald Trump.

Fiame Naomi Mata’afa was set to be Samoa’s first female prime minister, but when she arrived at Parliament to be sworn in, her predecessor had locked the doors. Samoa now has two competing governments and two people claiming the leadership role.

Thieves in Britain have stolen rosary beads that once belonged to Mary, Queen of Scots, along with other gold and silver artifacts that the authorities said were worth over $1.4 million.

The gymnast Simone Biles is doing things no one else would even dare — including one vault so dangerous that gymnastics, for now, limits the scoring rewards for trying it.

A few years ago, many in Silicon Valley expected that self-driving cars would be common by 2021. But after court fights, injuries and deaths, and tens of billions of dollars spent on a frustratingly fickle technology, companies like Uber and Lyft have abandoned the pursuit. Now the industry is settling in for years of more work.

Those companies still remaining could spend an additional $6 billion to $10 billion before the technology becomes commonplace sometime around the end of the decade or later.

Welcome to the Space Jam

The movie “Space Jam” — a comedy centered on a basketball game that pits Michael Jordan and the Looney Tunes characters against aliens — came out in 1996, during the internet’s early days. Its official website reflects its age: a simple pixelated image of stars, dotted with cartoon planets. By remaining unchanged, it has become a beloved cultural artifact for a subset of millennials.

The site “is important in the way antique maps are important,” Gina Cherelus and Caity Weaver write in The Times. It documents the internet as it once was, with downloadable screen savers, printable coloring pages and a one-second audio clip of Jordan saying, “You guys are nuts.”

Spacejam.com was recently repurposed to advertise the coming sequel, “Space Jam: A New Legacy,” starring LeBron James. But you can still find a prominent link to the original site. When it was made, “the internet was still whispering its promise,” said Don Buckley, an advertising executive for the film. “We were exuberant about its possibilities.”

Get a pot of rice started as this roasted dill salmon marinates and you can have dinner prepped in less than 20 minutes.

Search for coconut crabs in Makatea, an island in French Polynesia.

That’s it for today’s briefing. See you next time. — Natasha

P.S. Cynara Charles-Pierre is joining The Times from TD Bank as senior vice president of Culture and Communications.

The latest episode of “The Daily” is about the crumbling of the N.R.A., America’s most powerful gun rights group.

Sanam Yar wrote today’s Arts and Ideas. You can reach Natasha and the team at [email protected].