We’re covering a Chinese campaign to test 9.5 million people in one city, why the rollout of the first U.S. vaccines could be messy and the Beirut residents coming to pick up the pieces. 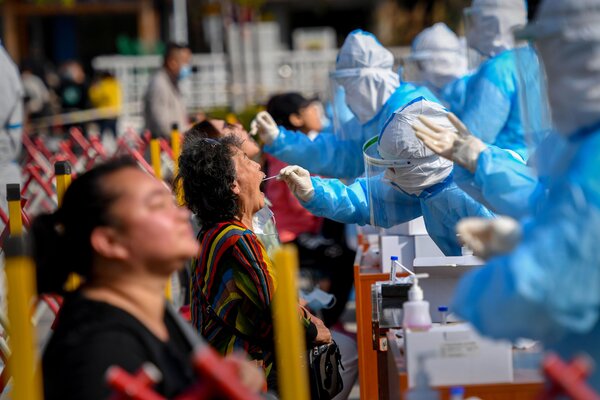 Millions to be tested after outbreak in China

The authorities in Qingdao have begun a five-day campaign to test all of its 9.5 million residents after the seaside city recorded the country’s first locally transmitted coronavirus cases in almost two months.

The authorities said that a dozen people in the eastern city had tested positive for the virus as of Sunday. The cases appear to be linked to the Qingdao Chest Hospital, which has been treating coronavirus patients arriving from abroad. The hospital has been placed under lockdown.

In a sign of the growing alarm over the outbreak, the National Health Commission in Beijing said on Monday that it had dispatched a team to Qingdao to “guide local epidemic prevention and control work.” Photos on social media showed people lining up for tests across the city.

Context: The government led similar mass testing campaigns in Wuhan, the city where the coronavirus outbreak began, and in the western region of Xinjiang.

Prime Minister Boris Johnson of Britain on Monday ordered pubs and bars in the coronavirus-ravaged city of Liverpool to be closed.

When vaccines arrive in the U.S., it might be messy

The United States may be within months of a turning point in the country’s fight against the coronavirus: the first working vaccine.

But that stage of the fight could be more frustrating and drawn out than many hope, experts say. The first vaccines may provide only moderate protection, low enough to make it prudent to keep wearing a mask. By next spring or summer, there may be several so-so vaccines, without a clear sense of how to choose from them. Some may be withdrawn from the market.

Quotable: “It has not yet dawned on hardly anybody the amount of complexity and chaos and confusion that will happen in a few short months,” said Dr. Gregory Poland, the director of the Vaccine Research Group at the Mayo Clinic.

Related: A network of scientists is chasing the pandemic’s holy grail: an antibody that protects against not just the virus, but also related pathogens that may threaten humans.

Some optimism: Our infectious diseases reporter has been a self-described “gloomy Cassandra” since he began reporting on the outbreak in the U.S. But now, he writes, he’s changing his tune slightly — based on vaccine progress, antibodies and expert predictions that the pandemic could be over in the U.S. by the middle of next year.

The top U.S. general declined to endorse recent White House announcements on speeding up the withdrawal of U.S. troops from Afghanistan.

General Mark Milley, the chairman of the Joint Chiefs of Staff, told NPR radio on Sunday that the agreement reached with Afghan and Taliban officials to leave Afghanistan was “conditions based,” adding that the United States would “responsibly” end the war.

President Trump’s national security adviser last week said the U.S. would cut its troops to 2,500 by early next year. Hours later, Mr. Trump suggested a timeline as early as Christmas.

On the ground: As negotiators in Doha, Qatar, try to push peace talks forward, the Taliban is testing Afghan and U.S. resolve by launching an offensive on the capital of Helmand Province.

Elsewhere in Afghanistan: A women’s health club in Kandahar is challenging conservative traditions that vilify exercise for women. “I feel so healthy and I have more energy — I’m so happy,” one woman said.

If you have 12 minutes, this is worth it

Child soldiers look back: ‘We were bulletproof’

When they were not even 10 years old, Johnny Htoo and his twin brother, Luther, led a rebel group known as God’s Army on Thailand’s border with Myanmar. Their fighters believed the boys could magically shield them from bullets.

Our Southeast Asia bureau chief followed up with the Htoo brothers two decades later. They are suffering from the emotional wounds of the war. After trying to build new lives, they find themselves pulled back to their roots. “I miss the jungle,” Johnny, above right, in his house in Thailand, said. “I miss where I grew up.”

BTS: The leader of the Korean pop group acknowledged the shared suffering of Americans and Koreans in the Korean War. The backlash in China was swift. Two prominent South Korean brands removed any trace of their collaborations with BTS on Chinese websites.

Nobel Prize: The award in economics honored Paul Milgrom and Robert Wilson, two academics affiliated with Stanford University, for their work pioneering new auction formats that governments have used to sell off radio bandwidth. Here are the rest of the laureates.

Snapshot: Above, Beirut in September. Many Lebanese people worry that a full recovery from the explosion that killed around 200 people in August won’t be possible. But residents of one of the city’s most diverse areas are moving back in and trying to rebuild.

What we’re watching: This video of the Nobel Prize winner Paul Milgrom learning the good news in the middle of the night from his neighbor and fellow winner. It’s pure joy.

Cook: This miso-sesame vinaigrette is good on anything. Drizzle it on a simple salad with lettuce and fresh vegetables or over sliced leftover steak, chicken or tofu.

Watch: The Israeli thriller “Tehran” follows an Iranian-born, Israeli-raised spy sent back into Iran on a deep-cover mission to help coordinate an attack on Iran’s nuclear program. Our critic describes the series as “slick, wildly entertaining and packed with fantastical plot twists.”

Do: Drawing a favorite object can be a real moment. You’re memorializing the story behind it. Here’s how to get started.

For more ideas on what to read, cook, watch and do, our At Home collection is your go-to resource while staying safe at home.

A Nobel laureate on science and Covid

Jennifer Doudna, a professor at the University of California, Berkeley, shared this year’s Nobel Prize in Chemistry with Emmanuelle Charpentier, now the director of the Max Planck Unit for the Science of Pathogens in Berlin, for their work on the Crispr tool to edit DNA. It was the first time the award has gone to two women.

Dr. Doudna spoke to our California Today newsletter about her prize and her recent shift to coronavirus lab testing.

First of all, congratulations! How are you feeling?

I’m in total shock, and I don’t feel like I really have had even a minute to think about it. There’s just so many things going on.

Can you explain in as simple of terms as possible what you won for?

Well, I guess the simplest way to say that is that it’s for a technology for gene editing, which means, as I think the Nobel committee even worded it this way, changing the code of life. So it’s a way to alter DNA with precision and accuracy in cells to control cells’ fate.

Is there anything you would change about the way science is seen and understood in the world today?

We could be using different forms of media, whether it’s in cartoons or short videos, and more conversational use of language that isn’t exclusive — not using jargon.

One of the things that I’ve seen in my career is that there’s been an unfortunate change in the opposite direction where scientists are increasingly distrusted.

We see this news now, even during the pandemic.

It’s partly scientists’ fault. We need to be better at talking about our work in ways that are relatable by non-specialists.

I know that your lab pretty quickly started doing coronavirus testing. How has that been going?

It seemed like something that we certainly had the technology and the know-how to do. Very quickly, at Berkeley, we set up a clinical testing lab in our Innovative Genomics Institute and started running tests with, initially, nasal swabs.

As the fall approached, it was clear that we would need to be helping the campus, as students started to arrive back. We knew that was a big motivator for getting our saliva tests going. Now, we’re serving students and the surrounding community with these tests.

That’s it for this briefing. And a correction: Monday’s Back Story described incorrectly the years Elaine Sciolino, a former Paris bureau chief, lived in France. She lived there from 1978 to 1980, and then again from 2002 through the present — not since 1978.

See you next time.

P.S.
• We’re listening to “The Daily.” Our latest episode is about the fight over access to abortions in the U.S.
• Here’s our Mini Crossword, and a clue: Alaska’s is longer than the rest of the U.S.’s combined (five letters). You can find all our puzzles here.
• The reporter Kenneth Vogel recently joined MSNBC to discuss revelations from investigations into President Trump’s tax records.