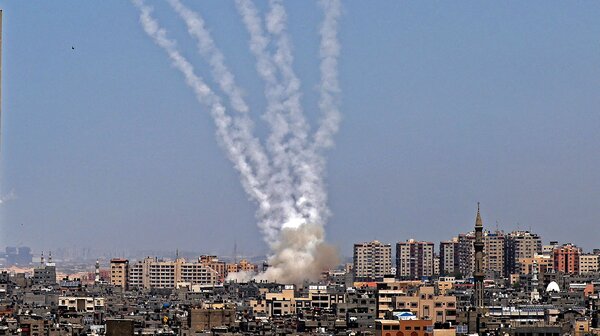 Some of the worst fighting between Israelis and Palestinians in years showed no signs of abating on Tuesday. Israel carried out deadly airstrikes in Gaza, and Hamas, the Palestinian militant group that runs the territory, fired heavy barrages of rockets at Tel Aviv and other Israeli cities.

Israel hit a Hamas office tower and a 13-story residential building in the Gaza Strip that collapsed. Shortly after 9 p.m., militants fired a barrage of rockets toward Tel Aviv, calling it retaliation for the airstrike. One rocket fired at Tel Aviv hit an empty bus south of the city, wounding at least three people.

At least 26 Palestinians, including nine children, were killed in about 130 Israeli strikes on Monday and Tuesday, according to health officials in Gaza. Two people in Israel were killed in strikes on the Israeli seaside city of Ashkelon on Tuesday.

Context: The immediate trigger for this week’s violence was likely a police raid on the Aqsa mosque compound, which sits on a site sacred to Christians, Muslims and Jews.

From Opinion: Israelis, Palestinians and their neighbors wonder: Is this the big one?

The anguish that engulfed New Delhi, India’s capital, over the past few weeks is now spreading across the south, hitting states and rural areas with fewer resources.

Positivity rates are soaring in states like Kerala, Karnataka and Tamil Nadu in recent weeks, and officials say that the rising numbers most likely undercount the totals. Some of the states have stopped sharing oxygen, saying they need it for their own populations. Vaccinations are sputtering.

The World Health Organization designated the B.1.167 coronavirus variant detected in India a “a variant of concern,” adding to the sense of alarm.

As the virus pummels India, it threatens to swamp Southeast Asian countries that until now had largely fended it off. Cambodia and Thailand recorded sharp increases in recent days.

Leveling off? New Delhi, the capital, reported 12,481 new infections on Tuesday, less than half of what was reported on April 30. Mumbai’s positivity rate has dropped to about 7 percent, from roughly 25 percent.

Two Chinese men who created an online cache of banned reports on the coronavirus, defying government censorship, have pleaded guilty in a trial.

Falling births and aging in China

The latest once-a-decade census showed China’s population is growing at its slowest pace in decades. The slow population growth has the makings of a demographic crisis.

The economy has long relied on a huge population and a growing pool of young workers. It will be hard to maintain economic growth if the labor pool keeps shrinking.

Much of China’s demographic problems stem from a one-child policy Beijing imposed in 1980 to tamp down population growth, enforcing it with sometimes draconian measures. The census results could compel Xi Jinping, the country’s leader, to reckon with the failings of the ruling Communist Party’s family planning policy.

There are also other reasons people don’t have kids, including the cost of raising them and delays in marriage among educated women. The figures also showed rising education and urbanization levels.

Context: Only 12 million babies were born in China last year, the fourth year in a row that births have fallen in the country. That makes it the lowest official number of births since 1961.

Quotable: Tracy Wang, an English teacher in Chengdu, said she did not want kids. “Before, many people used to think it was such an incredulous thought: ‘How could you even think this way?’” she said. “But now, they all understand that you can’t afford it.”

A shooting at a school in central Russia killed seven students and two school employees. Officials said a 19-year-old suspect was in custody. President Vladimir Putin ordered a tightening of the nation’s already strict gun laws.

A man who ventured out on a glass-bottom bridge in China was left clinging to the side for dear life after gale-force winds blew away some floor panels. He was rescued, but the episode raised questions about the safety of other glass bridges and walkways.

As Myanmar marked 100 days of junta rule, protesters gathered again across the country. Singapore’s foreign minister said that the army needed to cooperate, show restraint and start dialogue with its opponents.

NBC said it would not air the 2022 Golden Globes, after several major studios criticized the lack of diversity of the show’s organizer.

H Mart, a huge grocery chain that started in Queens, N.Y., nearly 40 years ago, changed the way Asian-Americans shop and eat. For decades in America, this kind of shopping was a pilgrimage. To make the foods of their heritage, they often had to seek out the lone Asian grocery store in town, which was salvation. Our reporter looked at what it has meant for generations of immigrants.

A brief history of modern beauty

For T Magazine’s beauty issue, writers broke down four subjects — hair, skin care, fragrance and makeup — that have changed over the decades. There are essays on the ’90s-era advances in weaves, wigs and other Black hairstyles, as well as the rise in people of all genders embracing makeup.

“Who gets to be beautiful now?” Hanya Yanagihara, T Magazine’s editor in chief, asks. “Anyone who believes themselves to be so.” Find the full issue here.

Let your oven do the heavy lifting with sheet-pan pierogies, brussels sprouts and kimchi.

Lambrusco, the gently sparkling and often budget-friendly wine, is the drink of choice in Emilia-Romagna. And it tastes great in a briny spritz.

With a few basic tips, you can begin making simple drawings of nature.

P.S. Valerie Hopkins, who has covered Central and Eastern Europe, will be joining our Moscow bureau.

The latest episode of “The Daily” is about the feud between Apple and Facebook.

You can reach Melina and the team at [email protected].