We’re covering Syria’s crisis point, a new opposition party in Russia and memorials to epidemics past. 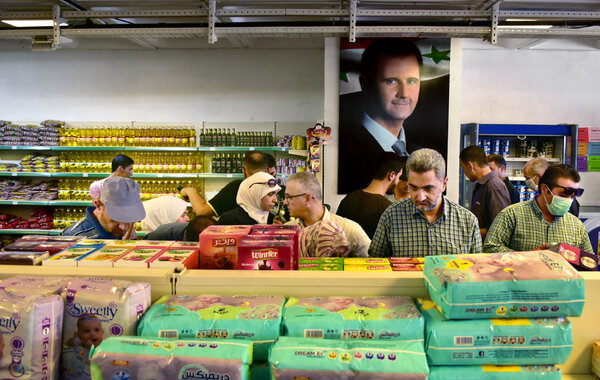 Nearly a decade into its civil war, Syria is in extreme distress. This month, the Syrian pound reached an all-time low against the dollar on the black market, decimating the value of salaries and jacking up the cost of imports.

Food prices have more than doubled in the past year, and 60 percent of the Syrian population are at risk of going hungry. Power shortages are constant, with some areas getting only a few hours of electricity a day. Most Syrians now devote their days to finding fuel to cook and to warm their homes, and some women are selling their hair to feed their families.

Cold comfort: At a private meeting, President Bashar al-Assad was asked about the country’s economic crisis, which now poses a significant threat to his regime. He had no concrete solutions, but he did float the idea that television channels should cancel their cooking shows so as not to taunt Syrians with images of unattainable food.

A variant first discovered in California in December is more contagious than earlier forms of the coronavirus, two new studies showed.

The findings fuel concerns that emerging mutants could blunt the sharp decline in new cases in the state and perhaps elsewhere.

Some experts said the new variant was concerning but unlikely to create as much a burden as the variant that originated in Britain, where it swiftly became the dominant form of the virus and overloaded hospitals there.

Researchers have been looking more closely at the new variant, known as B.1.427/B.1.429, to pinpoint its origin and track its spread. It has shown up in 45 states to date as well as in several other countries, including Australia, Denmark, Mexico and Taiwan, but it has taken off only in California.

Coronavirus restrictions have led to Champions League matches and World Cup qualifiers being played at neutral sites away from each team’s home soil. This summer’s European Championship could be the next to move.

The pandemic’s psychological toll has been accompanied by a worrisome increase in suicides among women in Japan. Last year, 6,976 women died by suicide in the country, nearly 15 percent more than the rate in 2019.

Scotland will emerge from its lockdown in three-week stages over the next few months, beginning with reopening schools. Most businesses and activities will be allowed to resume after April 26.

Drug companies need monkeys to develop Covid-19 vaccines. But a global shortage, resulting from the unexpected demand caused by the pandemic, has been exacerbated by a recent ban on the sale of wildlife from China, the leading supplier of the lab animals.

A new opposition party is flourishing in Russia, despite President Vladimir Putin making it clear that he doesn’t tolerate dissent.

Called New People, the party seems designed to appeal to the followers of the opposition leader Aleksei Navalny, who is awaiting transportation to a penal colony. But the reasons behind the party’s success, Russian analysts say, are to undermine Mr. Navalny, whose own party has been banned, to distract from his movement and to divide the liberal opposition — all while providing a veneer of multiparty politics in a country where there is little meaningful electoral choice.