It was never going to be easy to succeed Tony Hsieh, the celebrated chief executive of Zappos, who turned a tiny online shoe seller into a $1 billion behemoth through an obsessive focus on corporate culture and happy employees. But Kedar Deshpande took over at a particularly fraught time.

Zappos, which is owned by Amazon, was already navigating remote work and grappling with pandemic-driven changes in how people shop when Mr. Hsieh abruptly retired in August after two decades, which led Mr. Deshpande to be named C.E.O. Then in November, tragedy struck: Mr. Hsieh, 46, died from injuries suffered in a house fire in New London, Conn., sending shock waves throughout the roughly 1,500-person company, as well as tech and entrepreneurial circles.

Since then, it has been reported that Mr. Hsieh had been behaving erratically for months and that friends had considered staging an intervention last summer. The revelations brought new scrutiny to the circumstances of his exit from Zappos.

Mr. Deshpande, who was previously Zappos’s chief operating officer, said that when Mr. Hsieh told him last summer that he wanted to pursue other projects, he did not push back.

“From my experience working with Tony, Tony always believed in the things that he wanted to change,” Mr. Deshpande said in an interview, his first as chief executive. “I asked him, ‘Hey, Tony, are you sure?’ And he said, ‘Yes, I want to retire’ — so that was the end of the conversation.”

Now, Mr. Deshpande, 42, is tasked with shepherding Zappos through the late stages of the pandemic and into the company’s next phase as an online retailer, without Mr. Hsieh’s guidance. He must also show whether the company’s culture of “fun and a little weirdness” in Las Vegas can survive without its chief architect. 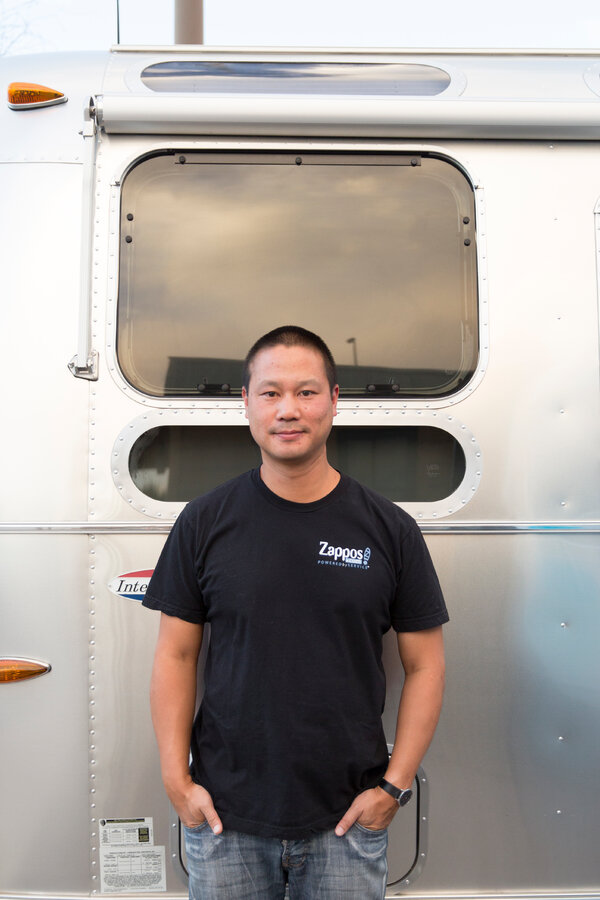 “The Covid situation and everything else going on makes it very tough, particularly with a culture that is built on physical proximity and happiness associated with that,” Mr. Deshpande said in the Zoom interview, from his home in Henderson, Nev. But he said he was optimistic about the future, especially given the decade he had spent at Zappos in different roles.

“The culture is not just one person or two people,” he said.

There was apparently no long-term succession plan when Mr. Hsieh stepped down. Zappos’s board, which consists of Amazon and Zappos employees, elevated Mr. Deshpande to the role. The company, founded in 1999, has long functioned as an independent unit within Amazon, which acquired it for $1.2 billion in July 2009 and does not disclose its financials.

It’s tough for a person to replace a C.E.O. with an outsize personality like Mr. Hsieh, said Erik Gordon, a professor at the University of Michigan Ross School of Business, who anticipated that Zappos’s culture will face some changes under new leadership.

“The person who takes over from the founder who created the culture doesn’t have the authenticity or moral authority that the founder had,” Mr. Gordon said. “Can he maintain the same spirit of fun and a little weirdness and positive team spirit?”

(Mr. Hsieh did not found the company, but has been referred to as a founder based on his involvement as an investor and chief executive from its earliest days.)

Mr. Deshpande, who is from Aurangabad, India, came to the United States for a master’s degree in computer engineering, and joined Zappos after stints at General Electric and PepsiCo. He joins a growing list of South Asian chief executives in the United States, at companies like Microsoft; Google’s parent company, Alphabet; and Gap.

Zappos, which derives its name from “zapatos,” the Spanish word for shoes, was an early e-commerce success story under Mr. Hsieh, who wrote a best-selling book in 2010, “Delivering Happiness: A Path to Profits, Passion, and Purpose.” It argued that a company’s top priority should be its culture and that keeping employees happy translated into success with customers.

The company, which moved from the Bay Area to southern Nevada in 2004 and now has a campus in downtown Las Vegas, developed a reputation for being a fun, almost cultlike place to work, where employees regularly socialized at work and outside the office. The company has claimed that it is harder to get a job at Zappos than it is to get into Harvard.

Mr. Deshpande said Zappos employees had become closer in some ways in the past year as they brought family or pets into the remote-work fold.

“When we have Halloween contests, it’s the entire family that is participating,” said Mr. Deshpande, who has two young daughters. He described packages Zappos sent to employees and their families for activities like planting herb gardens or performing science experiments.

He guessed that employees would start returning to the office after July 1 and were likely to develop hybrid schedules with some remote and some in-person work.

While Zappos did not have to struggle with the drop-off at physical stores that so many other retailers did, it did take a hit early on in the pandemic as shoes and clothing became an afterthought; few people were buying high heels last March. Sales have recovered since, fueled by demand in the so-called performance and home categories — think running and hiking shoes, pajamas, athleisure and slippers.

Mr. Deshpande said he was unsure when demand for high heels would return, but anticipated that people would continue to want comfort as the economy reopened.

Zappos has introduced and expanded ways to smooth out the kinks of online shopping during the pandemic, like allowing some customers to make returns through UPS home pickups, and making it easier to exchange items. It also observed that the average length of calls with customer service representatives had increased as people had more time in a closed-off world. They also left more detailed reviews on products.

One of the company’s biggest goals, and a top priority for Mr. Deshpande in coming years, is figuring out how to make online shopping less transactional and more like the browsing experiences that people seek out in malls and department stores. That includes developing new digital magazinelike “verticals” — much like what media companies create — such as “The Ones,” which is tailored for female sneakerheads and advertised as “powered by Zappos.”

Zappos is also behind VRSNL, a luxury site that has its own web address and no visible link to the shoe site. It features wares from designers like Dolce & Gabbana and Proenza Schouler. The company has been pouring new effort into product detail pages and informational videos catered to audiences like new runners, and even co-developing merchandise and campaigns with the brands it carries.

“What online fails to deliver, which physical delivers today, is around these different experiences,” Mr. Deshpande said. “Until you actually go and deliver on these experiences, people will go back to the physical, in my opinion, and they will stay online for only transactional experiences.”

The company refers to these efforts as “experience commerce,” and said the category was driving 25 percent of its investments. Outside of prompting consumers to explore more, Zappos is also trying to make online shopping more cohesive — all with the aim of getting consumers to spend more money over time.

“One of the challenges has been that when somebody walks into ‘online,’ somebody looking for a jacket, for example, we show them inventory next to each other — like a $30 jacket, $50, $100, $300,” Mr. Deshpande said. “This is a very disorienting experience.”

In his view, all of the efforts are in line with Zappos’s obsessive focus on service for the past 20 years, which he anticipates remaining its focus for the next 20 years.

While the company is still grieving Mr. Hsieh, Mr. Deshpande said, employees will continue to embody the values that he championed. He pointed to an instance during the holidays when one employee mentioned children missing out on meeting Santa Claus during the pandemic, leading to a multidepartment effort to set up Santa Zoom meetings for children around the country.

“To me, Tony’s legacy is around delivering this happiness to everybody,” Mr. Deshpande said. “This culture he has created or pioneered, it’s going to be alive.”