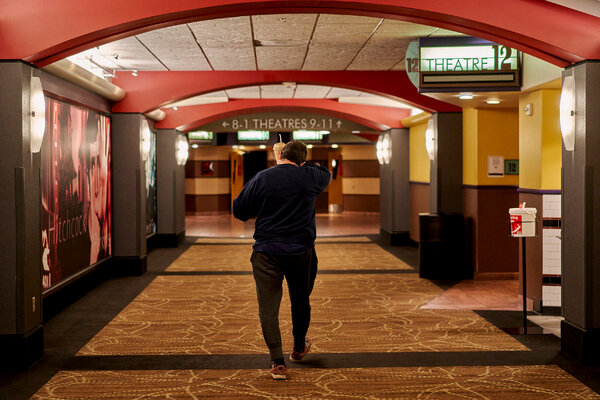 AMC’s gravity-defying run in the stock exchange came to halt in premarket trading on Thursday after the movie-theater chain said in a regulatory filing that it planned to sell an additional 11.55 million shares. Its share price sunk more about 4 percent, after being up about 20 percent earlier in the morning.

On Wednesday AMC’s share price nearly doubled, to $62.55, after the company said it would offer free popcorn and other perks to the more than three million retail investors that have recently bought shares in the company.

AMC has been embraced by individual small investors seeking to raise the price of certain unloved stocks. These shareholders now own 80 percent of the company, AMC said. Other so-called meme stocks also tumbled in premarket trading, including Bed Bath & Beyond, Koss and GameStop.

U.S. stock futures fell as traders cautiously approached two reports on the labor market. Weekly data on initial claims for state jobless benefits will be published later on Thursday morning. The number is expected to decline again and is about half of what it was in early April.

On Friday, the Labor Department will publish its monthly jobs report. And last month, that report showed an unexpectedly small increase in hiring in April.

The S&P 500 is set to open half a percentage point lower, futures indicate.

Investors are also watching the Federal Reserve closely for signs that it will pull back its monetary stimulus, which has helped keep asset prices high. Patrick Harker, the president of the Federal Reserve Bank of Philadelphia, said on Wednesday that it “may be time to at least think about thinking about tapering” its large government bond-buying program.

On Wednesday, the Federal Reserve announced that it would sell its relatively small holdings of corporate bonds, which were bought last year to stabilize the bond market in the early months of the pandemic.

Most European stock indexes were down on Thursday. The FTSE 100 in Britain dropped 0.8 percent, falling more than other major European indexes. There is speculation that the final lifting of social-distancing restrictions in Britain, scheduled for June 21, might be delayed because of the spread of the coronavirus variant first discovered in India.

Oil prices slipped. Futures for West Texas Intermediate, the U.S. crude benchmark, fell 0.2 percent to $68.70 a barrel. The previous day, the price was at its highest since late 2018.