NFTs, the hottest collectible that has been embraced by the founder of Twitter, the National Basketball Association and the artist who created a flying cat with a Pop-Tart body, has cast its reach back to the beginning of the digital age: the source code to an early version of World Wide Web.

Sotheby’s on Wednesday auctioned off the code, created by Tim Berners-Lee, in the form of a nonfungible token, or NFT, for $5.4 million with fees. Sotheby’s said it was accepting payment in cryptocurrency for both the hammer price and its buyer fee.

The winning bidder will remain anonymous, per auction house rules, but that could change if the buyer steps forward.

Bidding began at $1,000, and bidders had a week to name their highest price in the auction, called “This Changed Everything.” The NFT attracted 51 bids, according to Sotheby’s website, and the proceeds will go toward unnamed initiatives supported by Mr. Berners-Lee. Unlike some NFTs, the offering failed to inspire a last-minute flurry of demand, with the winning bid having been offered just under 10 minutes before the close of the auction.

“It’s nice to see it sell for a value commensurate with its historic significance,” said Jeremy Norman, a California-based rare book and manuscripts dealer specializing in the history of science.

He regards Mr. Berners-Lee’s 1989 invention as an innovation as significant as Johannes Gutenberg’s development of movable type in the 15th century. “It’s unbelievably important in the history of science and technology,” Mr. Norman said.

The NFT is an early copy of the code, a version of which has long been available in the public domain, but the token auctioned by Sotheby’s represents the original archive of the time-stamped files. “It’s authenticating that first code that was created and then selling it as memorabilia,” said Merav Ozair, an assistant professor who teaches finance and technology at Rutgers Business School.

The auction included the original time-stamped files containing the source code, an animated visualization of the code, a letter written by Mr. Berners-Lee reflecting on the code and the process of creating it and a digital poster of the full code from the original files. 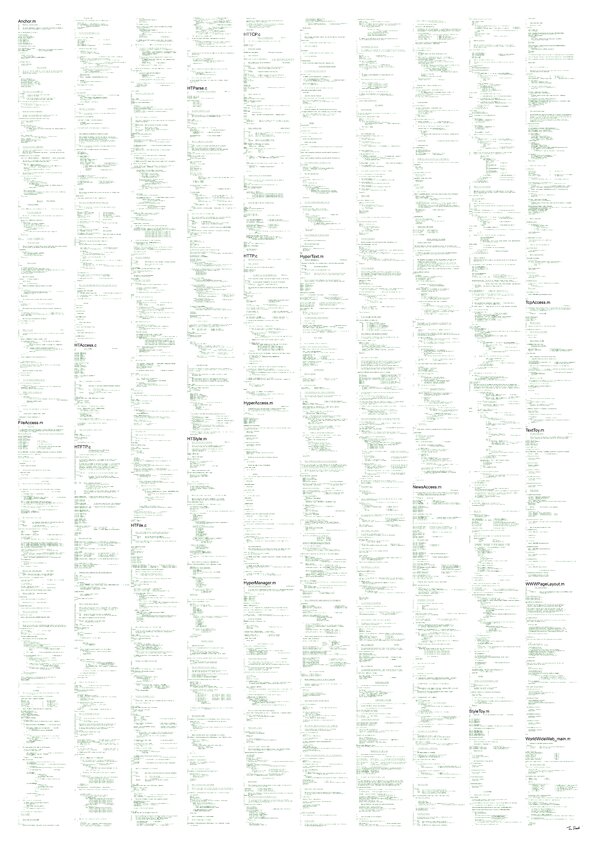 “We couldn’t have sold this 10 years ago, but now NFTs have enabled us to do it,” Cassandra Hatton, a vice president and global head of science and popular culture at Sotheby’s, said in an interview. “Previously in the history of science you had manuscripts you could hold in your hand. As we move forward, more and more of these manuscripts are created in a digital format.” (She noted, however, that the code that was auctioned “does not represent any ownership of the World Wide Web as an application.”)

Ms. Hatton said Sotheby’s collaborated with Mr. Berners-Lee, who had approached the auction house, to create an NFT that was understandable and visually appealing to the widest possible audience.

The British inventor has long been an advocate of giving individuals greater control over their data. He started an open-source software project, Solid, in an effort to decentralize the web, and he later founded a company, Inrupt, with John Bruce to encourage the adoption of open-source technology.

NFTs represent “the most appropriate means of ownership that exists,” Mr. Berners-Lee said in a statement released this month by Sotheby’s.

The tokens rely on blockchain technology, similar to the computer code that makes many cryptocurrencies possible. They have become popular in the art world because they allow artists to have more control over their works by selling limited-edition digital goods directly to consumers.

“An NFT is by definition a unique token. Each token has a unique hash number or a unique signature of an artist on their creation,” Professor Ozair said. “With this hash number, you can trace each NFT to the origin and the creator.”

In the past six months, auctioneers have sold a computer-generated illustration by Mike Winkelmann, the digital artist known as Beeple; digital Hot Wheels art made by Mattel; and even a New York Times column.

But the highly speculative market for NFTs has also cooled in recent months.

On May 9, the price of Ether, the cryptocurrency to which the values of NFTs are pegged, soared to $3,883, more than five times its price at the beginning of the year, according to coindesk.com. At that point, weekly completed sales of NFTs at dedicated marketplaces on the Ethereum blockchain (which do not include Christie’s and Sotheby’s auctions) reached a high of $176 million, said nonfungible.com, which charts the performance of the NFT market.

By May 20, weekly NFT sales had slumped to $19.2 million, a decline of 89 percent, and have flatlined at below $20 million, according to the database. The price of Ether has fallen, too, dipping below $1,800 in June.

This correction in NFT sales, or “stabilization phenomenon,” as the nonfungible.com blog preferred to call it, was due in part to the steep fall in the price of Ether as well as the age-old, ever-irrational cycle of boom and bust.

“Things have settled down,” said Anders Petterson, co-author of the “NFT Art Market Report,” published in May by ArtTactic, a London-based art market analysis company.

“The NFT market reached such high levels that people began to question where was the value,” Mr. Petterson said. “It got saturated. There was a massive supply of new artists, and we don’t have a qualitative benchmark. If you can’t explain value beyond the fact that people are buying it, it becomes difficult.”

But the top-end traditional auction houses, with their formidable global marketing machines, continue to set one-off benchmarks for NFTs. In June, when the specialist marketplace for “nifties” was still supposedly in the doldrums, Sotheby’s sold a rare “alien” CryptoPunk for a record $11.8 million, the second-highest price ever achieved for an individual NFT.

But Mr. Norman, the book dealer, was skeptical that the Berners-Lee NFT will create a surge in demand for computer code nonfungibles.

“There’s a real question of how much people will be interested in collecting digital,” Mr. Norman said. “The amount of digital information being generated is just incalculably gigantic. Everyone with a computer generates something. How much of it matters?”