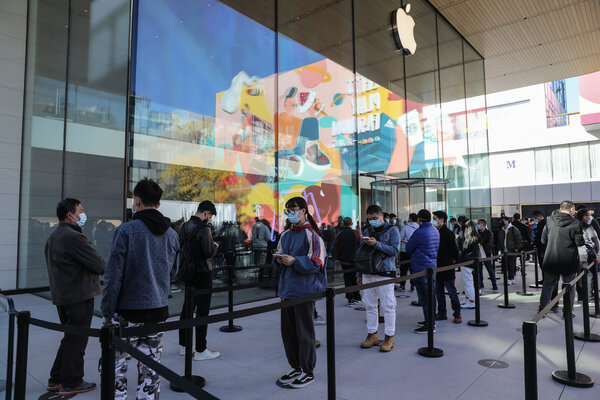 Apple said its new iPhone 12 led to a 21 percent increase in sales in the most recent quarter, pushing the company past $100 billion in quarterly revenue for the first time.

The tech giant becomes the third American company to reach $100 billion in revenue in a single quarter, joining Walmart and Exxon Mobil. Analysts expect Amazon to join the club when it reports its latest quarterly results next week.

The company’s profits grew 29 percent to a record $28.8 billion from a year ago. Its sales were $111.4 billion. The results easily beat analysts’ estimates.

The strong quarter was fueled by Apple’s latest iPhones, which went on sale in October. Analysts and investors had anticipated a strong quarter for months because many iPhone owners had waited to upgrade their devices in order to buy the new iPhones, which work with faster 5G wireless networks. Apple said iPhone sales increased 17 percent to $65.6 billion, a sharp reversal from a 21-percent decline in iPhone sales the previous quarter.

The record results were the latest sign of the growing power and heft of the largest tech companies, which have only gotten bigger and richer since the pandemic began.

With more people relying on its products to work, learn and socialize online, Apple has been an undisputed winner, and investors have bought its shares accordingly. In August, Apple became the first American company to reach a $2 trillion valuation. On Wednesday, less than six months later, Apple’s market value was just shy of $2.4 trillion, making it by far the world’s most valuable public company.

Apple had a particularly strong quarter in China. It sales in what it terms its Greater China region, which includes mainland China, Taiwan and Hong Kong, grew by 57 percent to a record $21.3 billion.