WASHINGTON — In his first days in office, President Biden has devoted more attention to issues of racial equity than any new president since Lyndon B. Johnson, a focus that has cheered civil rights activists and drawn early criticism from conservatives.

In his inauguration speech, the president pledged to defeat “white supremacy,” using a burst of executive orders on Day 1 to declare that “advancing equity, civil rights, racial justice and equal opportunity is the responsibility of the whole of our government.”

He has ordered his coronavirus response team to ensure that vaccines are distributed equitably. His $1.9 trillion recovery plan targets underserved communities by calling for paid leave for women forced out of jobs, unemployment benefits that largely help Black and brown workers, and expanded tax credits for impoverished Americans who are disproportionately nonwhite.

And the new administration is preparing to take sweeping steps in the months ahead to directly address inequity in housing, criminal justice, voting rights, health care, education and economic mobility.

“Racial equity is not a silo in and of itself,” said Cecilia Rouse, Mr. Biden’s nominee to lead his Council of Economic Advisers, who would be the first Black economist to oversee the council if confirmed by the Senate. “It is woven in all of these policy efforts.”

The actions reflect the political coalition backing Mr. Biden, who was lifted by Black voters to his party’s nomination and who won the White House in part on the strength of Black turnout and support from women in the suburbs and elsewhere. They also reflect what historians see as a unique opening for Mr. Biden to directly address issues of inequality — in contrast to President Barack Obama, under whom Mr. Biden served as vice president.

Mr. Obama, the nation’s first Black president, took pains to be seen as a president for “all Americans,” as opposed to Black Americans, said Nicole Hemmer, a Columbia University historian and associate research scholar with the Obama Presidency Oral History project.

“You got less of that overt racial equity language from Barack Obama than you get from Joe Biden,” Ms. Hemmer said. “The challenge to Biden is how he makes clear the universal benefits of focusing on racial and gender equity. He is going to face real pushback on this.”

The backlash has already begun. Senator Rand Paul, Republican of Kentucky, told Fox News that Mr. Biden’s Inaugural Address had attacked Republicans with “thinly veiled innuendo, calling us white supremacists, calling us racists.” The columnist Andrew Sullivan, who writes a Substack newsletter, accused the president of “culture war aggression” in a recent post, saying Mr. Biden’s focus on “equity” would give “named identity groups a specific advantage in treatment by the federal government over other groups.”

“You don’t get to unite the country by dividing it along these deep and inflammatory issues of identity,” Mr. Sullivan wrote. 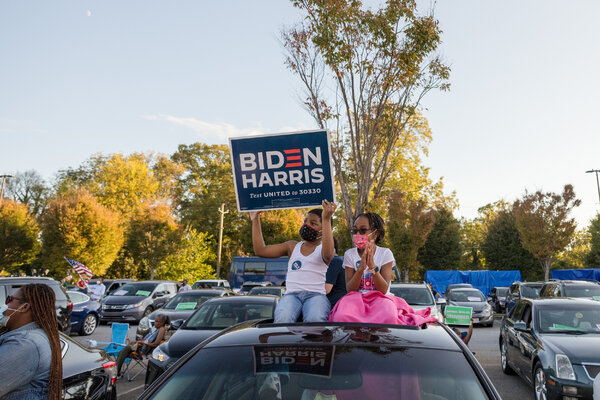 Mr. Obama’s national security adviser, Susan E. Rice, who is leading Mr. Biden’s Domestic Policy Council, is charged with ensuring that the new administration embeds issues of racial equity into everything it does. In an interview, she rejected the idea that doing so is a “zero-sum game” that benefited some groups of Americans at the expense of others.

“Look at the Covid crisis, which disproportionately sickened and killed Black and brown people who are the frontline workers, the essential workers,” she said. “We are all poorer when those among us who are most vulnerable, most disadvantaged, are suffering.”

Ms. Rice, who is Black, has little experience in domestic policy, but has recruited a team with deep roots in civil rights and justice. She said Mr. Biden persuaded her to return to the White House with the promise that equity issues would not be ”an isolated bubble,” but rather a central mission of his administration, one focused on rolling back the legacy of President Donald J. Trump, who she said “deliberately sought to divide and degrade huge segments of our population.”

One of the fullest expressions of Mr. Trump’s views came in September when he ordered the government to stop using diversity training programs, saying they were promoting a “malign ideology” that misrepresented the country’s history.

“This ideology is rooted in the pernicious and false belief that America is an irredeemably racist and sexist country; that some people, simply on account of their race or sex, are oppressors; and that racial and sexual identities are more important than our common status as human beings and Americans,” Mr. Trump wrote in his executive order.

Mr. Biden revoked the order on his first day in office. He also disbanded a presidential commission Mr. Trump had assembled that last week produced a report, widely denounced by historians, that included a reframing of the United States’ history of slavery in terms more favorable to white slaveholders.

“Many of the strides that we made during the Obama-Biden administration were not only reversed, but due to incendiary rhetoric, policies and practices, set our country back even further,” said Valerie Jarrett, who was one of Mr. Obama’s senior advisers. “Yes, it is less equitable today than it was in 2016. Therefore, the urgency to act now, and the willingness of the American people to support their president and the administration acting now, in this way, is far greater.”

Only two presidents before Mr. Biden have used their inaugural weeks to push for equality with the same force, Ms. Hemmer said. The first was Ulysses S. Grant, who called for better treatment of Native Americans and the passage of a constitutional amendment to give Black men the right to vote. Nearly a century later, Mr. Johnson, who was thrust into office after President John F. Kennedy’s assassination, called for the passage of civil rights legislation that helped remove some of the barriers that held back people of color throughout American society.

Mr. Biden made racial and gender equity promises a central theme of his campaign. He nominated a cabinet that has more women and people of color than any president before him, though he drew criticism from the Congressional Asian Pacific American Caucus for not appointing any Asian-American or Pacific-Islander secretaries.

The president’s legislative proposals to advance equity include trillions of dollars in new spending on coronavirus relief and, in an ensuing package to be announced next month, infrastructure, all of which are loaded with provisions meant to help Americans who have historically suffered discrimination.

Many of Mr. Biden’s plans are longstanding liberal priorities, but which the president and his team are now advocating with a racial emphasis. Biden aides have stressed how raising the minimum wage to $15 an hour, as Mr. Biden has proposed, would help Black and Latino workers in particular, and on Friday, Mr. Biden pushed Congress to act on his call for expanded antipoverty tax credits by highlighting their effects on nonwhite families.

“Our plan would reduce poverty in the Black community by a third and in the Hispanic community by almost 40 percent,” Mr. Biden told reporters.

Mr. Biden’s aides say it is possible to make progress on those historical inequalities, including income and wealth gaps by race and gender, while also addressing the nation’s immediate economic crisis. Ms. Rouse said the focus would help all Americans, regardless of race or gender, by improving the performance of the economy.

“We maximize growth, we maximize productivity in this country when we maximize all our productive assets,” she said in an interview. “Embedded in that is a recognition that we have a lot of talented people whose skills, whose knowledge, whose innovations and creativity are not being brought to bear to help their country.”

The president and his top aides describe the broader effort to achieve equity through the government in grand and sweeping terms: a pledge to begin “embedding equity across federal policymaking and rooting out systemic racism and other barriers to opportunity from federal programs and institutions.”

In an executive order he signed in the first hours of his presidency, Mr. Biden directed top officials across the federal government to examine how they could reshape the federal work force to ensure that people of color, the poor, rural residents, the disabled, L.G.B.T.Q. people and religious minorities are not denied opportunity or government benefits.

It also establishes efforts to break down federal data, including economic indicators, “by race, ethnicity, gender, disability, income, veteran status or other key demographic variables” to measure progress on equity goals, a move praised by many economists.

“I am beyond excited,” said Rhonda V. Sharpe, an economist who leads the Women’s Institute for Science, Equity and Race in Virginia. “When you disaggregate data, what you get to see is the nuances in outcomes. And the nuances can help you craft better policies.”

And Mr. Biden has faced pressure to also make changes to the White House organizational chart to ensure a focus on equity. In December, the N.A.A.C.P. urged him to create a civil rights envoy, and civil rights groups and other organizations sent his advisers a five-page memo asking Mr. Biden to establish a White House office dedicated to racial equity.

In recent weeks, those groups have largely applauded Mr. Biden’s efforts, including his appointment of Catherine E. Lhamon, the chairwoman of the U.S. Commission on Civil Rights, to serve as a deputy director under Ms. Rice for racial justice and equity.

Mr. Biden also won praise from a group of Latino leaders after meeting with them the week before the inauguration. “He was very articulate, very clear, about how equity needed to be at the center of all his health and economic recommendations and proposals and investments,” said Janet Murguía, the president of UnidosUS, one of the groups that sent the racial equity memo to the president’s advisers. “He’s talking about this in a very compelling way.”

The N.A.A.C.P.’s president, Derrick Johnson, said Mr. Biden and Vice President Kamala Harris deserved credit for a “strong start.” But his organization, he said, would be closely watching which policies the administration prioritizes and how Mr. Biden sets his goals for equity.

“I believe that they have the right intentions,” Mr. Johnson said. “But there has to be an executive priority that any decision that they make is made with a true racial equity lens and is measured against a set of metrics so that we can all see the progress.”