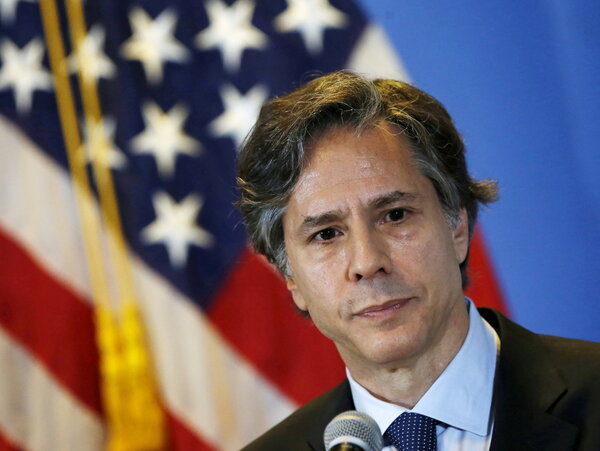 A return to global alliances?

In choosing Tony Blinken, a longtime foreign policy aide, as his secretary of state, President-elect Joe Biden is indicating that he wants to return to a world of international alliances and cooperation, after four years of combative “America First” policies under President Trump.

Mr. Blinken’s first priority will be rejoining global agreements and institutions, The Times reports. That includes returning the U.S. to the Paris climate accord — which Mr. Biden has made a top priority — and remaining in the World Health Organization. He has also spoken of making Europe a partner of “first resort, not last resort,” potentially defraying trade tensions with the E.U.

“The world does not organize itself,” Mr. Blinken wrote in a 2017 Times Op-Ed. “In the absence of an engaged, diplomatically energized America, others will set the agenda, shape the rules and dominate international institutions — and probably not in ways that advance our interests or values.”

He will probably try to build an international coalition to put pressure on China. The Trump administration battled Beijing largely alone, using tariffs as weapons. But Mr. Blinken is expected to build closer ties to India and other Asian countries to focus on trade and tech investments as an alternative to partnering with China, reviving the pre-Trump game plan behind the Trans-Pacific Partnership.

Other administration picks show Mr. Biden’s preference for establishment figures. He is expected to name Jake Sullivan, a Democratic foreign policy expert, as national security adviser and Linda Thomas-Greenfield, a 35-year veteran of the State Department, as ambassador to the United Nations.

Up next: Treasury secretary. The transition team is expected to name its pick for Treasury in the next day or two, with the former Fed chairwoman Janet Yellen the favorite in betting markets. But Mr. Biden is not waiting for the new secretary to start before pushing his economic priorities, according to an eye-opening report by The Times’s Jim Tankersley and Emily Cochrane. Spooked by forecasts of a double-dip recession, Mr. Biden’s team is urging Congress to pass some sort of stimulus — even if limited in scope — during the lame-duck session, which would abruptly end months of partisan gridlock over a new rescue package.

On Friday, JPMorgan became the first major bank to forecast that the U.S. economy will shrink in the first quarter. Business surveys in the eurozone released today suggest that activity there is sinking again following new lockdowns, a potential sign of things to come across the Atlantic.

AstraZeneca announces optimistic results for its Covid-19 vaccine. The drug maker and its partner, Oxford University, said the treatment was on average about 70 percent effective. This follows promising vaccine data from Pfizer and Moderna, but the Oxford treatment is notable because it is cheaper and easier to manufacture and store.

Air travel is rising, despite health officials’ warnings. Millions of Americans appear set to travel for Thanksgiving, even as health experts urge people to stay home. And the U.S. now has enough ventilators to meet a potential surge in cases — but not enough people to operate them.

More Republicans acknowledge Joe Biden’s victory. Senator Pat Toomey of Pennsylvania, Representative Liz Cheney of Wyoming and Chris Christie, the former New Jersey governor and adviser to President Trump, are the latest to urge the official start to a transition. (More on the transition timeline below.)

Meet the cocoa futures whale. News reports identified Hershey as the buyer who agreed to acquire huge amounts of cocoa through the ICE futures exchange, sending December futures contracts soaring. Hershey normally buys physical cocoa beans, but appears to have turned to the markets after Ghana and Ivory Coast imposed extra costs to support their farmers.

Abu Dhabi bets big on oil. The emirate said that it plans to spend $122 billion on petroleum production over the next five years, tapping new oil discoveries. The planned expenditures come as OPEC insists that its members cut production.

Adidas is working with the bank on a sale that could take place as soon as early next year, sources told DealBook. Rumors have been swirling that the company may sell the brand, which has struggled to keep pace with rivals like Nike. The Financial Times has reported that Permira and Triton are among the interested suitors. Adidas did not respond to a request for comment. JPMorgan declined to comment.

The numbers: Sources said Reebok could fetch around $1 billion in a deal, but that valuation is subject to change. (It would be a far cry from the roughly $4 billion that Adidas paid for it in 2005.) Reebok’s sales were down 7 percent in the most recent quarter, excluding currency effects, compared with a 3 percent drop for Adidas as a whole.

Buyers are wary of the pitfalls involved in the sale of Adidas’s Rockport unit: Three years after Adidas sold the shoe brand to Berkshire Partners, it filed for bankruptcy, blaming its former parent for a sale process that “took meaningfully longer and was significantly more expensive than planned.”

The pitch: Broadly speaking, the athletic apparel industry is doing well. Consumers are embracing both comfort and fitness during the pandemic, bolstering sales at companies like Nike and Lululemon. But Reebok’s quirky brand has had a hard time recapturing its 1980s heyday, even with the muscle of Adidas behind it. And Reebok’s gear is focused largely on indoor sports, like CrossFit, which will take longer to recover in the pandemic.

“Simply printing money and putting it in play does not create economic activity. This must be done by ‘animal spirits’ in the private sector or government stimulus programs.”

— Dick Bove, a senior research analyst at Odeon Capital Group, arguing that the Treasury was justified in asking the Fed to return unused stimulus funds.

The push to privatize Fannie and Freddie

The Federal Housing Finance Agency was created in 2008 to take control of Fannie Mae and Freddie Mac during the mortgage market meltdown. Now, with the economy in peril again, the Trump administration is reportedly rushing to privatize the finance giants. Mark Calabria, the F.H.F.A. head, has held talks with Treasury Secretary Steven Mnuchin to take steps in this direction, The Wall Street Journal reported.

Privatization will minimize the “government footprint,” Mr. Mnuchin has said previously. To entice investors, he may have to write down more than $220 billion in senior preferred shares the Treasury received in exchange for its cash infusion when Fannie and Freddie were flailing. Michael Bright, the C.E.O. of the Structured Finance Association, fears that privatization may be a “swindle” wrapped in “the ideological cloak of deregulation,” he told DealBook.

Is there still time? Common shareholders of Fannie and Freddie are fighting the agency in the Supreme Court next month, arguing that the statute that created the F.H.F.A. illegally limits the president’s authority because the agency’s director can be fired only “for cause.” They want the whole law invalidated, including the “net worth sweep” that transfers profits to the Treasury. But the justices can find the directorship clause flawed and leave everything else intact, as they did in a similar case involving the Consumer Financial Protection Bureau. And if they see no problem with the current setup, Mr. Calabria — appointed to a five-year term by President Trump last year — could stay on and pursue privatization without political threat.

The deadline for certifying the official vote tally in the U.S. election is Monday for Michigan and Pennsylvania, and Tuesday for Nevada and North Carolina. Here’s the latest on President Trump’s legal challenges to the certification process.

Black Friday won’t be the same this year, with many retailers starting holiday sales earlier and encouraging shoppers to buy online. Several retailers report earnings on Tuesday, including Abercrombie & Fitch, Best Buy, Nordstrom and Gap. U.S. markets are closed for Thanksgiving on Thursday.

The deadline for TikTok to sell itself to a consortium led by Oracle and Walmart is Friday, the end of a 15-day extension to the original deadline.

Today is the deadline for the General Services Administration administrator, Emily Murphy, to brief congressional committees on her delay in ascertaining a presidential election winner, a step necessary to start the transition process. Depending on the result of the briefing, House Democrats could call her to testify at a public hearing, Representative Carolyn Maloney of New York, the chairwoman of the House oversight committee, and others wrote in a letter last week.

“We have been extremely patient, but we can wait no longer,” the letter said. “Your actions in blocking transition activities required under the law are having grave effects.” President-elect Joe Biden’s chief of staff, Ron Klain, said on ABC that the delay was hampering his team’s ability to conduct background checks on cabinet picks, and that the impacts “escalate every day.”

It’s “a serious business question,” the billionaire entrepreneur Mark Cuban wrote on LinkedIn. “There is a lot at stake” in the transition, which Mr. Cuban said “should happen quickly.” Likewise, the Leadership Now Project, a consortium of 250 businesses and leaders, recently sent a letter to Ms. Murphy, writing that “delaying the transition poses serious risks to our nation’s economy and recovery.” They join a growing list of influential figures pressing the G.S.A. to start the transition.

President Trump’s post-White House plans reportedly include paid speeches and rallies and writing a memoir — but not starting a media company. (WaPo)

Germany will make it mandatory for most public company boards to have at least one female director. (Reuters)

American chip technology from Intel and Nvidia is at the heart of the Chinese government’s surveillance of Muslims in the Xinjiang region. (NYT)

How Facebook plans to curry favor with the Biden administration. (FT)

A conversations about how to help working parents cope with the pandemic. (Reset Work)

Disrupting industry leaders isn’t as easy as it used to be. (Quartz)

Younger workers are turning their back on office romances. (WSJ)