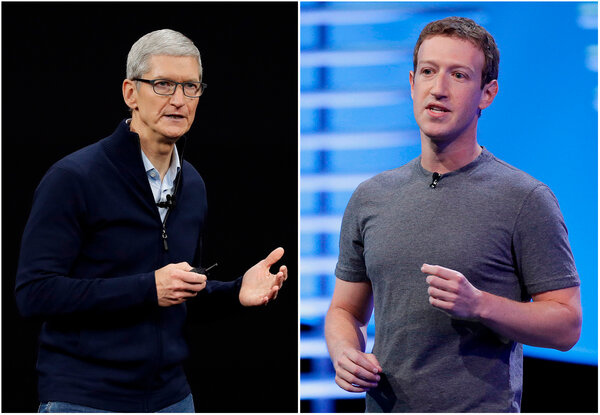 When Big Tech’s C.E.O.s are hauled before Congress and accused of amassing excessive power, the leaders from Apple, Facebook, Google and others have often tried to present a united front. But these companies are also competitors, and have recently taken to calling on regulators to go after each other.

Facebook and Apple are now feuding openly, after years of low-level tension. Facebook has launched a website and ad campaign that accuse Apple of threatening “the free internet” through new policies on personal data tracking. Apple says it’s just “standing up for our users.”

Facebook says Apple will hurt small businesses. “Apple’s latest update threatens the personalized ads that millions of small businesses rely on to find and reach customers,” Facebook noted on a website it created to give “small business owners a place to speak their mind.” Facebook’s business model relies on its ability to deliver targeted ads around the internet.

“What could be at stake is some future business that Facebook thinks is the next big thing that they can’t get without this data,” Ben Bajarin, an analyst in Silicon Valley, told The Times.

Apple says Facebook should get users’ approval before tracking them. Its update will prompt users to decide whether to allow Facebook to track their activities in other companies’ apps — “they should have the choice,” Apple said in a statement (accompanied by a snarky graphic). But the change also adds hurdles to apps from Facebook (and others) that compete with Apple’s own.

“A lot of the privacy moves that Apple has made over the past few years, in terms of allowing people to understand what’s happening to them in the background, a lot of it has to do with Facebook,” said Mr. Bajarin.

Here’s where it gets really interesting. To add heft to its fight, Facebook said it would provide information about “the unfair policies that Apple imposes” for an antitrust suit filed by Epic Games. (For the gory details of that case, see our interview with Epic’s chief Tim Sweeney at our Online Summit last month.) And in Europe, Facebook said yesterday it supports new curbs on tech giants’ market power provided they “will also set boundaries for Apple.”

Trying to set regulators against rivals isn’t new for Big Tech — Facebook’s Mark Zuckerberg raised public and private alarms with U.S. officials about TikTok’s Chinese ownership. These battles, though, are closer to home, between companies also engaged in a common antitrust war.

Meanwhile, a new lawsuit accuses Google of illegal control of the online ad market. Ten states said it overcharged publishers and clamped down on rivals. “If the free market were a baseball game, Google positioned itself as the pitcher, the batter and the umpire,” Ken Paxton, Texas’s attorney general, said. (Other states are expected to file a separate lawsuit as soon as today.)

A major focus of the suit is an accusation that Google made a deal with Facebook to divvy up ad marketplaces.

Lawmakers say they’re this close to a stimulus deal. Congressional leaders signaled they had agreed on the main points, including direct payments, additional unemployment benefits and small-business aid. But economists say the roughly $900 billion package isn’t nearly enough to buttress the economy.

The Fed sticks with near-zero rates and monetary easing. The central bank’s chair, Jay Powell, said that its game plan would last “some time” and that “the next few months are likely to be very challenging.” He called again for more stimulus from Congress.

Retailers hit trouble before the holidays. U.S. retail sales fell 1.1 percent last month, with restaurants and department stores especially troubled. The consulting firm AlixPartners warned that retailers’ free cash flow has dropped off a cliff as they invest in sanitization and e-commerce.

Roku and WarnerMedia finally strike a deal. After an eight-month standoff over how to split subscriber fees, the video-streaming device maker will carry HBO Max. The agreement comes as WarnerMedia plans to boost subscribers for HBO Max by releasing its top movies on the service simultaneously with theaters.

New York lawmakers consider raising taxes on the wealthy. Democratic leaders in the state are considering a higher rate for those who earn at least $1 million, to avoid billions of dollars in cuts to social services. Critics say that might prompt high earners to leave, as some have in California.

The Supreme Court said yesterday it will review whether some of the N.C.A.A.’s limits on paying college athletes violate antitrust law, as lower courts have ruled, with a decision expected before the court term ends in June. The N.C.A.A. may regret pursuing the case if the justices issue an “economically earnest” decision, said Marc Edelman, a sports law professor at the Zicklin School of Business.

“The N.C.A.A., whether they know it or not, had it good,” Mr. Edelman told DealBook. The lower court decision at issue ruled that colleges’ limits on education-related benefits — computers, tutoring and the like — violated antitrust law. The bigger question is whether these athletes should be directly paid to play sports, but the N.C.A.A. says that limits on education-related compensation are also crucial to the “pro-competitive” nature of amateur athletics.

When a coalition of more than 1,000 schools that arguably control a market agree on limiting pay, “it’s classic wage-fixing,” Mr. Edelman said. The justices “should” go even further and “simply overturn pay restraint rules,” he added, presenting the N.C.A.A. with a much bigger issue than whether football players should be given laptops.

Other balls are in the air. Last year, California passed a law that bars schools from applying the N.C.A.A.’s pay restrictions, and would allow players to hire agents and make money from endorsements beginning in 2023. The N.C.A.A. had threatened to exclude the state’s universities from showcase tournaments, which didn’t stop California lawmakers but did interest the Justice Department’s antitrust chief, Makan Delrahim. He called amateurism a “laudable goal” but warned that it “does not grant antitrust immunity.”

As other states consider similar moves, the N.C.A.A. is asking Congress for a federal antitrust exemption in exchange for adopting rules that would let athletes sign limited endorsement deals.

Bitcoin is doing that thing again

The cryptocurrency blew through previous records, at one point today approaching $24,000 per coin. As Bitcoin soared, Scott Minerd of Guggenheim Investments told Bloomberg that the Fed’s money printing, the relative value of similar assets like gold and other factors led him to conclude that Bitcoin’s “fundamental” value is $400,000 per coin — to which his interviewer responded, “Whoa.”

As the stock trading app Robinhood surges in popularity, it has drawn the attention of securities regulators, with officials in Massachusetts filing a complaint that accuses the company of manipulating inexperienced investors.

The app was accused of keeping young traders hooked. Robinhood used aggressive marketing techniques, like offering free shares, and “gamification” features to encourage frequent trading, according to a complaint by Massachusetts’ secretary of the commonwealth. That helps the company’s “payment for order flow” business model, where Wall Street firms pay it to execute customers’ trades.

Robinhood defended its policies, saying in a statement that it did not make investment recommendations: “We disagree with the allegations in the complaint by the Massachusetts Securities Division and intend to defend the company vigorously.”

The timing is inauspicious. Robinhood is preparing to go public, hiring the likes of Goldman Sachs to advise on an I.P.O. The prospect of other regulators following suit presents an unwelcome headache in an otherwise bumper year.

How to reimagine policing

In a year of unrest and upheaval, police reform has become a matter of popular debate, with one phrase in particular inflaming passions. The latest debate in our DealBook D.C. Policy Project convened activists, academics, police chiefs and politicians to discuss public safety, racism and what people mean when they say “defund the police.” It was moderated by The Times’s John Eligon.

The former deputy attorney general Rod Rosenstein suggested “refunding” was a more useful term than “defunding,” emphasizing a shift in “where the money is spent and how it’s spent.” Mayor Quinton Lucas of Kansas City, Mo., said the “defund” discussion erred by centering debate around the police, instead of prioritizing investments in mental health and other services. But Carmen Best, Seattle’s former police chief, had limited patience with the fixation on words: “Whether it’s ‘defund’ or ‘divest’ or ‘reinvest’ or ‘refund’ or whatever the terminology is — those things are all very fine. Those are part of the discussion. But what, succinctly, is the plan to move it forward?”

For the plans proposed by her and fellow panelists — including the Detroit police chief James Craig, the Tucson police chief Chris Magnus, the political scientist Katherine Einstein and the activists Justin Blake, Cat Brooks and Brandon Dasent — check out our recap, which includes video of key exchanges.

Shares in the e-commerce platform Wish fell 16 percent in their trading debut, bucking the trend of big pops for tech companies’ I.P.O.s. (Bloomberg)

In striking a deal for the asset management company Eaton Vance, Morgan Stanley beat out JPMorgan Chase, whose initial takeover bid had put it in play. (FT)

The investment firms Silver Lake and Thoma Bravo sold some of their stake in the networking company SolarWinds days before word came out that Russia had hacked U.S. government agencies through its software. (FT)

President Emmanuel Macron of France has tested positive for the coronavirus, and will work in isolation for a week. (NYT)

How the U.S. spent tens of billions of dollars on cyberdefense and yet was beaten by Russian hackers — who are still attacking government systems. (NYT, FT)

A deep dive into how much of the British government’s spending on pandemic supplies and equipment went to politically connected companies with no experience in the field. (NYT)

Amazon is arguing that workers at its warehouses, data centers and Whole Foods stores should be prioritized for Covid-19 vaccines. (WSJ)

Track how many Covid-19 doses are being allocated by state. (NYT)