Good morning. (Was this email forwarded to you? Sign up here.)

Let’s call the whole thing off?

Hours after the Fed chairman, Jay Powell, warned that the U.S. economy would face “tragic” consequences without more government spending, President Trump cut off stimulus talks. In a series of tweets that rattled the markets yesterday afternoon, Mr. Trump ordered negotiations over another trillion-dollar package to halt until after the election.

What’s the strategy? Mr. Trump said that Republicans should instead focus on confirming Judge Amy Coney Barrett to the Supreme Court. More than 70 percent of voters supported more stimulus in a recent poll, making the political rationale for his move unclear. Although Democrats and Republicans were edging closer to an agreement to spend around $1.6 trillion, they remain far apart on the details, with Democrats pushing for significant aid for state governments and Republicans worrying about the effect on the national debt.

Mr. Trump’s back and forth may be a negotiating tactic. The market drop after his rejection of talks could be a gambit to focus minds on what’s at stake. (His comments supporting specific stimulus measures came after the markets closed.) Until a deal is reached, here is who is left in limbo:

• Airlines and hotels. An estimated 948,000 workers in the travel and tourism industry will lose their jobs without more stimulus, according to data from Tourism Economics for the U.S. Travel Association. That’s on top of the 3.5 million jobs the industry has already lost.

• Restaurants. A poll last month found that 40 percent of restaurant owners expected to close their establishments within six months in the absence of government aid. Three million restaurant employees have already lost their jobs.

• State and local governments. More than four million public-sector jobs could be lost as state houses and municipalities make cuts to compensate for drops in tax revenues, according to Moody’s.

• Unemployed people. Temporary layoffs are becoming permanent job losses, the latest data shows, with more than seven million people out of work for at least 15 weeks. A large share have relied on stimulus and extra unemployment insurance to pay mortgages and rent, according to Deloitte, risking wider financial reverberations as savings dwindle. “We had a bridge which took us till about September” said Raghuram Rajan, a former chief economist of the I.M.F. Without more help, he said, “anybody who was on that bridge falls off a cliff.”

• “Today, once again, President Trump showed his true colors: putting himself first at the expense of the country, with the full complicity of the G.O.P. members of Congress,” House Speaker Nancy Pelosi said.

• “Washington’s failure to enact additional Covid relief will be felt on Main Streets and at kitchen tables across the United States,” said a representative for the Chamber of Commerce. “Failure to reach a deal on additional relief would worsen and prolong the crisis for our country,” added the Business Roundtable.

The markets are … up? Stock futures suggest that markets today will regain some of yesterday’s losses. That suggests that investors and analysts still believe a deal is in the offing, either under Mr. Trump or Joe Biden, however unclear the path to an agreement. 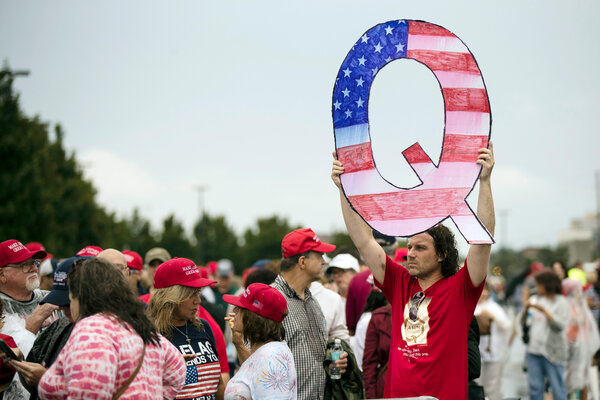 The White House approved stricter Covid-19 vaccine guidelines after all. The F.D.A. released new requirements for drug makers working on coronavirus vaccines, after White House officials blocked the move for two weeks. That means such treatments probably won’t be available until after the November election.

G.E. faced regulatory scrutiny over its accounting practices. The company said it had received a so-called Wells notice, a letter from the S.E.C. warning of potential civil enforcement action, over the accounting in an insurance division, the latest legal headache tied to the division.

Facebook widened its crackdown on QAnon. The company said it was removing any account, group or page from its platforms that openly associates with the conspiracy theory, after previous steps to clamp down on the movement failed to do much. Separately, Citigroup fired an employee who was revealed as the operator of a major QAnon website.

The U.S. trade deficit hit a 14-year high. The gap between what America sells abroad and what it imports went up 6 percent in August from the previous month, to $67 billion. That runs counter to President Trump’s goal of closing the gap, although the deficit with China shrank 6.7 percent, to $26.4 billion.

A plan to tame the tech giants

House lawmakers released a 449-page report on the dominance of Silicon Valley’s titans, outlining how the companies have become “the kinds of monopolies we last saw in the era of oil barons and railroad tycoons.” Among the findings from the House Judiciary Committee’s report:

• Amazon uses its power as a dominant third-party marketplace to harvest sales data from independent retailers and give its own products an advantage.

• Apple uses its monopoly over the iOS App Store to take huge cuts from app developers’ sales and “generate supra-normal profits,” a charge leveled by Epic Games and others. It also privileges its own apps, including by pre-installing them on devices.

• Facebook, which reduced competition by buying or copying rivals, has become so large that its biggest competition comes from within (as when Instagram threatened to overtake Facebook’s own app). That also led to an erosion of user privacy and a spread of misinformation by users of the platform.

• Google’s overwhelming dominance of search, maps and more gives it “near-perfect market intelligence” on what products and services people want, giving it a leg up on competitors. It also goes to great lengths to lock out other search engines.

The key quote: “This pattern of behavior raises questions about whether these firms view themselves as above the law, or whether they simply treat lawbreaking as a cost of business.”

How the companies responded: A common refrain was that the committee’s recommendations would hurt customers and independent businesses that use their platforms for free. Facebook added that it faced plenty of competition (including from TikTok, whose popularity among teenagers is still soaring).

There’s bipartisan agreement that there’s a problem … and not much else. The report was put out by the committee’s Democrats, after most of its Republican members took issue with its findings. Representative Jim Jordan of Ohio wanted to address accusations of bias against conservative viewpoints; Representative Ken Buck of Colorado disagreed with the committee’s calls to embolden consumer lawsuits and break up tech giants.

• Based on the number of pages devoted to each company, the committee’s main focus was on Google and Amazon, followed by Apple and Facebook.

• The Trump administration is continuing inquiries into the four companies, with an antitrust case against Google potentially coming soon.

• House Democrats have briefed Joe Biden on their findings, aiming to persuade a potential Biden administration to take up the issue.

Meanwhile, Google will spar with Oracle over a $9 billion software copyright dispute before the Supreme Court this morning. Listen to oral arguments here at 10 a.m. Eastern.

America’s biggest bank plans to push clients to adopt the guidelines of the Paris climate accords, the latest example of a U.S. company making the environment a priority.

JPMorgan will urge clients to drastically reduce emissions over the next several decades, while investing billions in new green-energy projects. The goal is to help reduce global net emissions to zero by 2050, a key target in the Paris agreement.

• The bank won’t cut ties with fossil-fuel clients like Exxon Mobil, nor will it sever relationships with customers who do not reduce emissions. And it’s unclear how JPMorgan will measure clients’ carbon outputs, with the bank saying it will help devise new metrics and create an advisory group.

Climate advocates gave the initiative a mixed grade, after pushing the bank for years to take action. The Rainforest Action Network, which accuses JPMorgan of being the biggest financier of fossil fuels, called the announcement “a welcome step forward.” But it and other groups noted big holes in the policy. “2050 vision is all well and good, but we need 2020 actions,” said an official with the Stop the Money Pipeline Coalition.

• Britain is investing heavily in satellites and other space businesses as part of its post-Brexit transformation. (NYT)

• Quartz, the business news site, is reportedly back on the block two years after being sold to a Japanese financial data company. (WSJ)

• President Trump’s $70,000 in tax deductions for hair care may have broken the law. (NYT)

• Apple is expected to unveil the next generation of iPhones, including a 5G model, at an online event next Tuesday. (The Verge)

• Facebook deleted a post by President Trump that falsely asserted the flu was deadlier than Covid-19. (Vox)

• “Ad Tech Could Be the Next Internet Bubble” (Wired)

• Honeywell predicts that private-jet flights will return to pre-pandemic levels next year. (Bloomberg)

• Cole Haan is teaming up with Slack to create a shoe inspired by pandemic-driven remote working, because … well, just because. (Business Insider)

Thanks for reading! We’ll see you tomorrow.